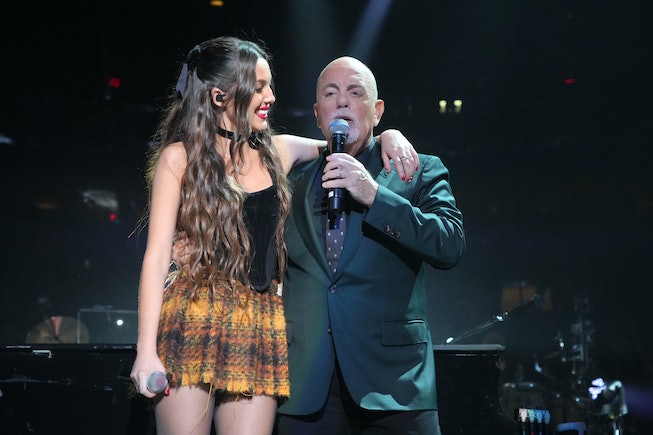 Olivia Rodrigo is finally living out her Sour dreams. On Wednesday, Aug. 24, the 19-year-old singer made a surprise appearance midway through Billy Joel's concert at Madison Square Garden in New York City. Fellow Rodrigo fans know that this is a huge moment for the pop star, as she mentioned her admiration for Joel in her hit single “deja vu” over a year ago, referencing his 1983 classic “Uptown Girl.”

She spent the evening singing her own track, as well as Joel’s song, opting for her go-to silhouette: the corset. While on stage, the Sour songstress wore a black vintage Vivienne Westwood corset from the brand’s Fall 1991 collection, sourced from Tab Vintage. Styled by Chloe and Chenelle Delgadillo, Rodrigo completed her outfit with a pleated tartan mini skirt from Saint Sintra’s Fall 2022 collection, platform knee-high boots, and a black choker to match.

Rodrigo’s unexpected on-stage performance follows her four-month-long global Sour tour and her latest red carpet pit stop for the premiere of The High School Musical: The Musical: The Series Season 3. As far as corsets go, Rodrigo has been captured a number of times wearing the coveted trend, from celebrating her Sour concert in Los Angeles in May to a few weeks before that, when she was captured in a coquette-inspired corset at the premiere for her Driving Home 2 U film in March. She’s also donned the throwback trend during the 2022 iHeartRadio Music Awards. Her affinity for the corset even traces back to October 2021 while at the Jimmy Kimmel Live! show, where she wore a plaid lace-trimmed version.

See Olivia Rodrigo’s full outfit, featuring her vintage corset in more detail, along with photos of her with Billy Joel on and off stage, below.

NEXT UP
Culture
Spice Girls May Reunite For King Charles’ Coronation
Culture
Senators Quoted Taylor Swift During Ticketmaster’s Hearing
Culture
The Madonna Biopic Is Being Scrapped
Fashion
Jenna Ortega Is The Face Of Adidas’ Newest Line
Style + Culture, delivered straight to your inbox.