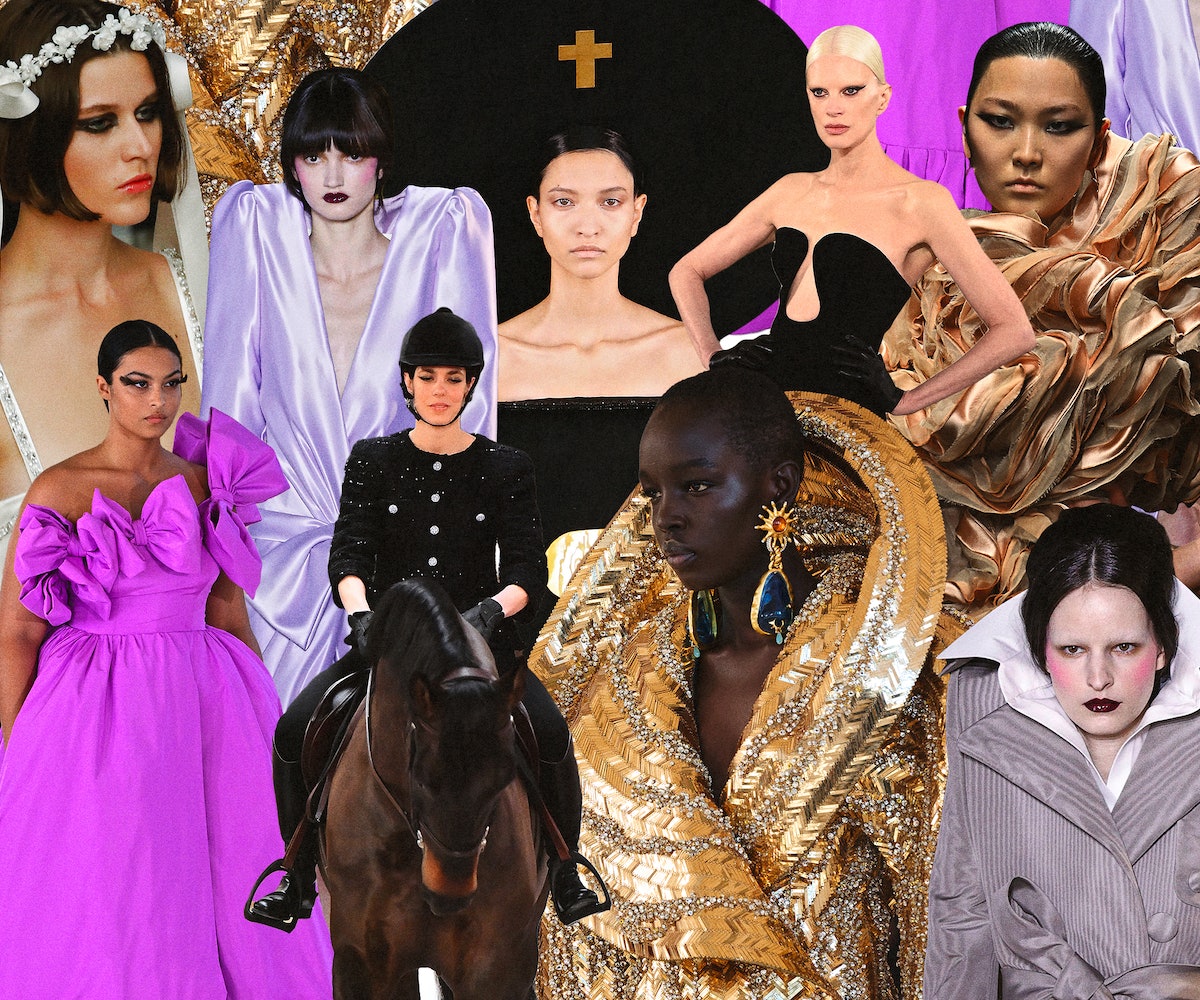 After a return to IRL runway shows and celebrity-studded front rows in July of last year, Paris Couture Week’s comeback continued at the start of 2022 with plenty of buzz worth talking about. For starters, there was the debut of “Juliye,” or new couple Julia Fox and Kanye West, who already reached the matching-outfits stage of their budding relationship while sitting front row at Schiaparelli. It’s too bad the two missed out on Glenn Martens’ debut for Jean Paul Gaultier (Fox is a Diesel girl, after all), which was one of the most highly anticipated and applauded collections of the week.

There was great street style, a slew of well-dressed celebrities, and dazzling makeup looks that seemed to have channeled the Euphoria craze in Paris, too, but the pièce de résistance of the week were the clothes, of course. Ahead, read more about the can’t-miss collections and fashion moments from Paris Couture Week Spring 2022.

Kicking off Couture Week in Paris was Schiaparelli by Daniel Roseberry, who joined the French fashion house as its creative director in 2019. The in-person Spring 2022 runway show allowed Schiaparelli’s growing loyal following of both industry fans and celebrities to witness its show-stopping designs up close and IRL once again. The latest collection consisted of only a black, white, and gold color palette with less of Roseberry’s signature surreal aesthetic and more of a focus on “empyreal” (heavenly or celestial), translated through sharp tailoring and orbital silhouettes.

Runway shows love a standout moment, and Chanel opted for a few: a memorable, geometric-inspired set created by French artist Xavier Veilhan, live music from Sébastien Tellier, and brand ambassador Charlotte Casiraghi, the granddaughter of Grace Kelly, opening the event on horseback. As for its Spring 2022 couture collection, Creative Director Virginie Viard juxtaposed the venue’s structured setting with clothes that were light and fresh, with plenty of flouncy silhouettes, fringe, macramé, colorful tweeds, and more. (The show’s street style scene was just as good, as well.)

Following Sacai’s Chitose Abe, the creative director of Y/Project and Diesel, Glenn Martens, took the reins at Jean Paul Gaultier as part of a revolving roster of guest designers behind the brand’s couture line. For Spring 2022, Martens took the core elements of what makes JPG so beloved — Breton stripes, corsetry, sheer chiffon, to name a few — and revamped them with refreshing out-of-the-box takes that only Martens can expertly execute. His one-time collection was one of the most talked-about moments of the week.

Leave it to Viktor & Rolf to bring a meme-worthy moment to Paris Couture Week. While the design duo didn’t rely on text-covered ballgowns or cheeky royal sashes this time around, there was still some virality in its Spring 2022 collection. Inspired by old Dracula films and a specific silhouette from their 1993 collection, Viktor & Rolf created a brand new “power shoulder” silhouette that nearly reaches to the top of the models’ heads. The jarring but powerful look was bound to garner attention online as soon as it hit the runway.