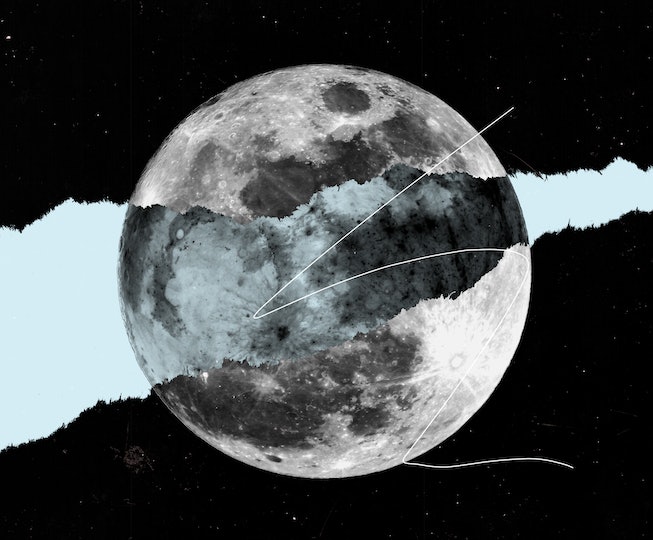 If you’re reading this after August 1, then congratulations: We’ve survived. The month opens with an epochal, explosive conjunction, featuring the battling planet Mars, the chaos-bringer Uranus, and the moon’s north node, in Taurus together for the first time since 325 B.C. Count on revelation and reinvention in the arenas of currency, the carnal, and gender, and, unfortunately, the powers afforded to modern autocrats. But it’s not all doom for the sake of it: Uranus and the north node seek to lead us into the future, however violent the crossing. The systemic breakdowns to come will activate our individual engine power. We’re in for a change of bosses. Are you ready to accept the gig?

After blowing up Taurus, Mars, and Uranus will settle down… somewhat. Mars enters Gemini on August 20, where it will remain well into 2023, going retrograde at the end of October. This is an especially long residency in any sign for the planet of forward drive. In Gemini, the base of versatility (and, therefore, ambivalence), Mars will need time to make sense of what you’re supposed to do next. In a new economy, in a very different decade, where are your talents best applied? Take your time with this one, and let yourself experiment a little.

Uranus, meanwhile, joins Jupiter, Saturn, Neptune, and Pluto for their summer season retrogrades, allowing a chance for the dust to settle on a climactic year of change. Jupiter only began its backward movement at the end of July, in Aries, the sign of new beginnings and creative endeavors. This is an excellent time to re-edit your student film, try writing new songs, or give a first date a second chance. Nothing needs to debut just yet, but whatever is germinating needs care and support. Take the launch of Virgo season on August 22, and the Virgo new moon five days later, as opportunities to decorate your binders for your favorite projects.

If you’re hoping that the fireworks will subside after the first, the following 30 days may upset you. As the sun, Mercury, and Venus hit Leo, they’ll clash with planets in fellow fixed signs Aquarius and Taurus. Saturn is nearly finished with its tour of collectivized, ethical Aquarius; as the Leo planets come into direct opposition, they’ll unleash a final barrage of cancellations and cultural deterioration. The battle between generations, genders, and globalized beliefs is indeed nearing its final act. When you get lost in the noise, look to the sun, in Leo, to remember your place in the game, and to the full moon, in Aquarius on August 11, as a north star forward. There’s no getting out of the maelstrom: only flying through. See you on the other side.

Jupiter, the planet of lightning and grandeur has been in Aries since May, vastly expanding your place in the world and your ability to strike in it. As of now, Jupiter has gone retrograde and won’t be direct in your sign again until Christmas season. This summer, you received the first call on the mountain; you’ll need a few months of initiation before the quest fully begins in 2023. On August 20, your ruling planet Mars enters Gemini in your third house of communication, where it remains for the rest of the year. Before the big picture conquest can begin, you must start small, though no less decisively, in the realms of income and daily life. How can you assert your new sense of purpose and vision to your employers, friends, and family? Even the most minor changes in your routine, or in your relationships, can clear the way to your higher destiny. You’ve taken your first step into a larger world. No going back now.

From the first until the very end, a volley of planets clash and catalyze in the angular houses of your chart — Taurus, in the first house of self; Leo, in the fourth house of home; Scorpio, in your seventh house of others; and Aquarius, in your 10th house of public standing. Everything, from a fight with your mother to a job rejection, will feel connected, fated, and pyrrhic. Amid the primeval clashes with your own demons, a star emerges to lead you from the underworld. On August 11, the Aquarius full moon shines from the top of your chart, lighting your way to purpose like the Light of Eärendil. Now is the part of the journey that plunges you into fire and reckoning. Don’t forget to look up once in a while, and remember what calls you through the chaos.

On August 20, Mars enters Gemini, where it will remain until March 2023, retrograding and rehashing along the way. As it joins the asteroid Pallas, aka Athena, the goddess of military strategy, you are called to take decisive action and launch your talents forward. Start with your home life, your daily rituals, and your means of mental organization. With the sun and Mercury moving into Virgo, in your fourth house of emotional rootedness, and a Virgo new moon on August. 27, you’re invited to build a foundation for greater expansion. Clean your house, go in on your cognitive behavioral therapy workbooks, and take action to feel like your routine is in place, even if you don’t yet know what mission will fill it with purpose.

Since May, Jupiter has lit up your 10th house of career and public standing, arming your inner Alexander for a world takeover. This month, Jupiter begins its retrograde saga, not returning to direct action in Aries until December. Take time now to consolidate the plan for the rest of the year and to rework your endgame vision. The sun enters Virgo on August 22, followed by a Virgo new moon on August 27, all going down in your third house of daily life and communications. Now is the training montage in the sequel, when you get harder, sharper, and faster before you face Ivan Drago. Hone your routines and rituals now, so that you’ll be in fighting shape by the end of the year.

The sun continues to rule from its throne in Leo until August 22, with Venus taking her seat at the king’s side starting on August 11. Your inner glory is emerging, naturally. However, with Saturn, in your seventh house of others, and a Uranus-Mars-north-node volcano in Taurus, in your 10th house of public standing, this month will make every act of self-affirmation feel dangerous. You will face clashes with lovers and authority figures; career upheaval; and direct downpours on your little Truman Show. All of these challenges are meant to test your belief in your talent, and force you to fly blind. Don’t cower from a fight, especially when it can reveal your true invincibility.

Toward the end of summer, you’ll face two intense retrogrades: September’s Mercury in Virgo; then Mars in Gemini, in your 10th house of career, from October to March 2023. Through the end of the year, you’ll be able to inspect your big picture goals, and decide which path of action to take. But for August, it’s shoot first, ask questions later. Mercury brings action to Virgo from August 4 to 28; Mars starts its Gemini career surge on August 20; Virgo season kicks off two days later; and a Virgo new moon hits the skies on August 27. Let yourself be scattered, overcommitted, and chaotic this month. You’ll have plenty of time to clear through the dust later.

Hunting season is still on, with Jupiter in Aries in your seventh house of public arrival. With Jupiter now retrograde for nearly the rest of 2022, you’re encouraged to streamline your technique to precision: Where, and how, should your individual gifts be debuted? Harnessing and honing will be major themes for the rest of the year, as Mercury enters your sign on August 25, before the retrograde season in September. You have time now to refine what you’re expressing and representing, what you want others to see in you, and where you want to be deployed. You’ve always been a cunning social strategist. Now’s the time to embrace it.

From first to last, this August promises to be a ragnarok, a spin-cycle of destruction and renewal that will leave you dazed, devastated, and permanently changed. The month begins with Mars, Uranus, and the north node in a rare and cataclysmic conjunction in Taurus, likely furthering the hasty decline of economic stability as we know it. It will be up to you, as the emissary of the underworld, to lead us into a new world order. To step into your power, count on a melee of challenges, tests, and clashes from planets in your fourth house of personal rootedness; seventh house of others; and 10th house of public standing. Endure this, and you’ll come out in Sarah Connor shape, apocalypse-ready and fit to lead us forward.

Mercury returns to his home office in Virgo, in your 10th house of public standing, on August 4, followed by the sun on August 22. Embrace career protagonism now: Think big, and lay the tracks for a long and definitive reign. As for your love life, Mars enters Gemini, in your seventh house of intimate partnership, on August 20, where it will remain into 2023. You are embarking on a long-term relationship review, which will confront your ambivalence and doubts. Go slow with it, and see who is coming into your life. You don’t need to make any decisions yet.

Leo season goes down in your eighth house of other people’s money and ego dissolution, calling you to momentarily unload the weight of the world from your shoulders, turn over control, and allow yourself to be desired, prized, and adored. Much of this sexual surrender will be aided by Venus, still in Cancer in your seventh house of relationships. On August 9, Venus opposes Pluto, the planet of the underworld, in Capricorn, awakening your inner Persephone. Embrace the shadow of your femininity and desire. What dark majesty reigns from the other side of propriety, stability, and so-called authority? What does she have to teach you?

At the end of Casper, the friendly ghost catches a break, and gets one dance, in corporeal form, with his beloved Christina Ricci. After so much inner work, you deserve a spin on the dance floor. On August 11, Venus joins the sun in Leo, in your seventh house of public visibility, on the same day of the Aquarius full moon. Let yourself be seen. A planetary firestorm will rage between Aquarius, Leo, and Taurus, in your fourth house of psychological rootedness, indicating that there’s plenty more metamorphosis to come. While the fates decide your purpose in the bigger cosmic order, take a chance to dance on solid ground.

Ready yourself for your debut. Virgo opens its doors to Mercury on August 4, followed by the sun on August 22, bringing action and attention to your seventh house of public visibility. Now is the time to be out, so long as you are armed with Virgo’s penchant for boundaries: You get to decide how many drinks is too many, when to say no, and whom to say no to. The new moon in Virgo on August 27 sets up new relationships and collaborations, all based on your terms. Anything is possible when you make the rules.

NEXT UP
Astrology
Your February 2023 Horoscope Is A Breath Of Fresh Air
Astrology
How to Use Astrology to Access Past Lives
Astrology
Get To Know Aquarius, The Certified Freak Of The Zodiac
Astrology
January 2023’s New Moon In Aquarius Is All About The Big Picture
Style + Culture, delivered straight to your inbox.