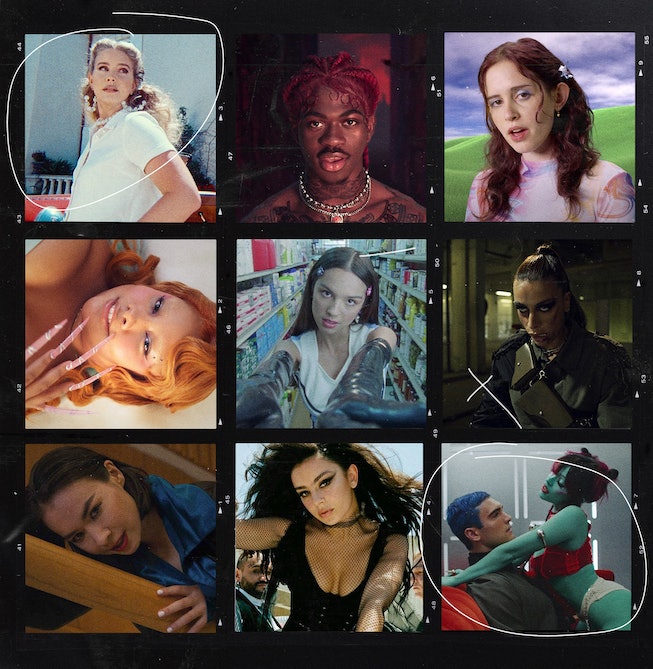 Even though the nostalgia industrial complex and its never-ending churn of unnecessary reboots kept culture at large stagnant in 2021, a much needed reprieve was found in the year's music videos. If everything else was a boring regurgitation of something once great, 2021's music videos were a reminder that creativity isn't fully dead on arrival.

The music that defined the year and the stories they told received another layer of artistry through their accompanying music videos. The meteoric rise of Olivia Rodrigo from a teenage girl nursing her first broken heart with a new driver's license to an enraged pop-punk figurehead to a new generation; Lil Nas X cementing himself as one of the decade's most fearless artists; Lana Del Rey evolving to her highest form as an honest-to-God Californian lady of the canyon; Grimes and her expansive sci-fi visions that feel nothing short of prophetic; Megan Thee Stallion turning a phrase and shifting language like it's nothing.

2021's music videos may range in budgets, but their common thread is clear — a little freaky, a little funny, and always striking. See the 13 best videos of the year, in no particular order, below.

Olivia Rodrigo not only calcified every 2021 trend from corsets and chain necklaces to vinyl gloves and hair clips in her “good 4 u” music video, but she also evoked 2000s gems like Bring It On and Jennifer’s Body — with a palpable, angry pop-punk edge that’s for anyone who's ever been so pissed they want to walk down a drugstore aisle and knock stuff off the shelves. Most importantly? At the end, she burns it all down. — Sophia June, Culture Writer

When aliens aren’t abducting humans, concocting hostile takeovers, or whatever other overused intergalactic trope they’ve been saddled with, they’re just hanging out, bar-hopping, and trying to get laid. “Need To Know” is a glimpse of a night out in a galaxy far, far away with Doja Cat and her interplanetary posse — which includes Grimes at her apotheosis as an angelic Martian of sorts — that looks so fun, I’m booking a one-way ticket to Planet Her and never looking back. — Layla Halabian, Culture Editor

Lana del Rey’s “Chemtrails Over The Country Club” is half a gorgeous, grainy Super 8 version of Lana’s Laurel Canyon: red convertibles, white lace driving gloves, lemons and limes galore — so much so that it feels like Lana is just spoofing herself at this point. But halfway through, things turn freaky, like something out of the wannabe David Lynch Riverdale universe. There are wolves and rituals and rolling around on the ground and maybe a sacrifice? Therein lies the duality of Del Rey we can’t look away from: her messiness and her glamour. — SJ

Leave it to Charli XCX to turn a funeral into a bender. At this point, it’s just another day in her crusade to drive pop into the future! Watching her writhe in front of a coffin and an empty grave in “Good Ones” is a cheeky thrill, and Charli’s va-va-voom glamour is a perfect harbinger of what’s to come with her new record, Crash. — LH

Saweetie’s “Best Friend” is the cutest music video of the year. It’s impossible to not get a little earnest over this celebration of two hot best friends going to the strip club, hanging out in fur-lined robes, and ending with a triumphant Thelma and Louise homage. Plus, any music video that includes the words “toxic masculinity” in a gooey, sparkling pink cursive onscreen is something to be celebrated. — SJ

Sevdaliza makes a great action hero in “Homunculus,” as an expectant mother who also happens to be a skilled assassin. She easily guns down intruders who arrive at her hyper-sleek, futuristic home, but the stakes continue to escalate from there as the avant-electronic artists almost meets her maker while definitely meeting a freaky needle injection and a cyborg version of herself. If you have some sort of deep-seated fear about doctors, it’s probably best to skip this one. — LH

Mitski - “Working For The Knife”

Mitski feels it all in her music video for “Working For The Knife,” where she does what anyone who did theater in high school remembers fondly — waiting until nobody’s in the auditorium and then doing some freaky dance moves onstage. (Nobody else?) She really lets it all out, reminding me of the cathartic chaos of how modern dance majors at my college would dance at parties where they really have to FEEL IT ALL. — SJ

Magdalena Bay choosing the rolling hills of Windows XP and GeoCities-level UI as the visual backdrop for “Secrets” works seamlessly with the duo’s groovy and atmospheric pop. It that makes me feel like I’m watching an old-school visualizer for hours on end on my parents’ desktop computer, a silly little slice of lost bliss! — LH

“Player Of Games” might be a bonafide club track, but it’s also one of Grimes’ saddest songs to date. The anguish of letting go of someone, of realizing that “even love couldn’t keep you in your place” is realized through Grimes’ visions of a sci-fi kingdom; a massive knight duels her with both light sabers and swords under the bloody moons of Jupiter, their figurative and literal game of chess is digital, analog, and gut-wrenching. Much like 2015’s “Flesh Without Blood,” the latter half of “Player Of Games” is enveloped with an enchanting warning. An angelic Grimes sings of fallen angels, of Lucifer and God, the tangled messes native to Earth, and her own fate as a casualty of a man who seems to stop at nothing to get what he wants. — LH

The first time I saw “Thot Sh*t,” I watched it three times in one sitting. The power Megan Thee Stallion holds over some slimy unnamed politician who both verbally abuses women being sexy in a music video while also jacking off to them, is mesmerizing. It’s fun to see him get hit by a garbage truck and be haunted everywhere he goes by the power of her Hotties. Plus, the last shot! Name a more grotesque, karmic image in a music video this year that you also wish you’d never seen. — SJ

I understand that we’re barely into the decade, but I already know in my heart that Lil Nas X is its definitive artist. Not only are his troll sensibilities top-tier, but they translate beautifully from sh*tposting on Twitter to his music videos; watching him descend down a celestial stripper pole into the depths of hell, only to then twerk on and then destroy the Devil makes me smile every time I watch. Watching a creative genius bet on himself, again and again, never gets old. — LH