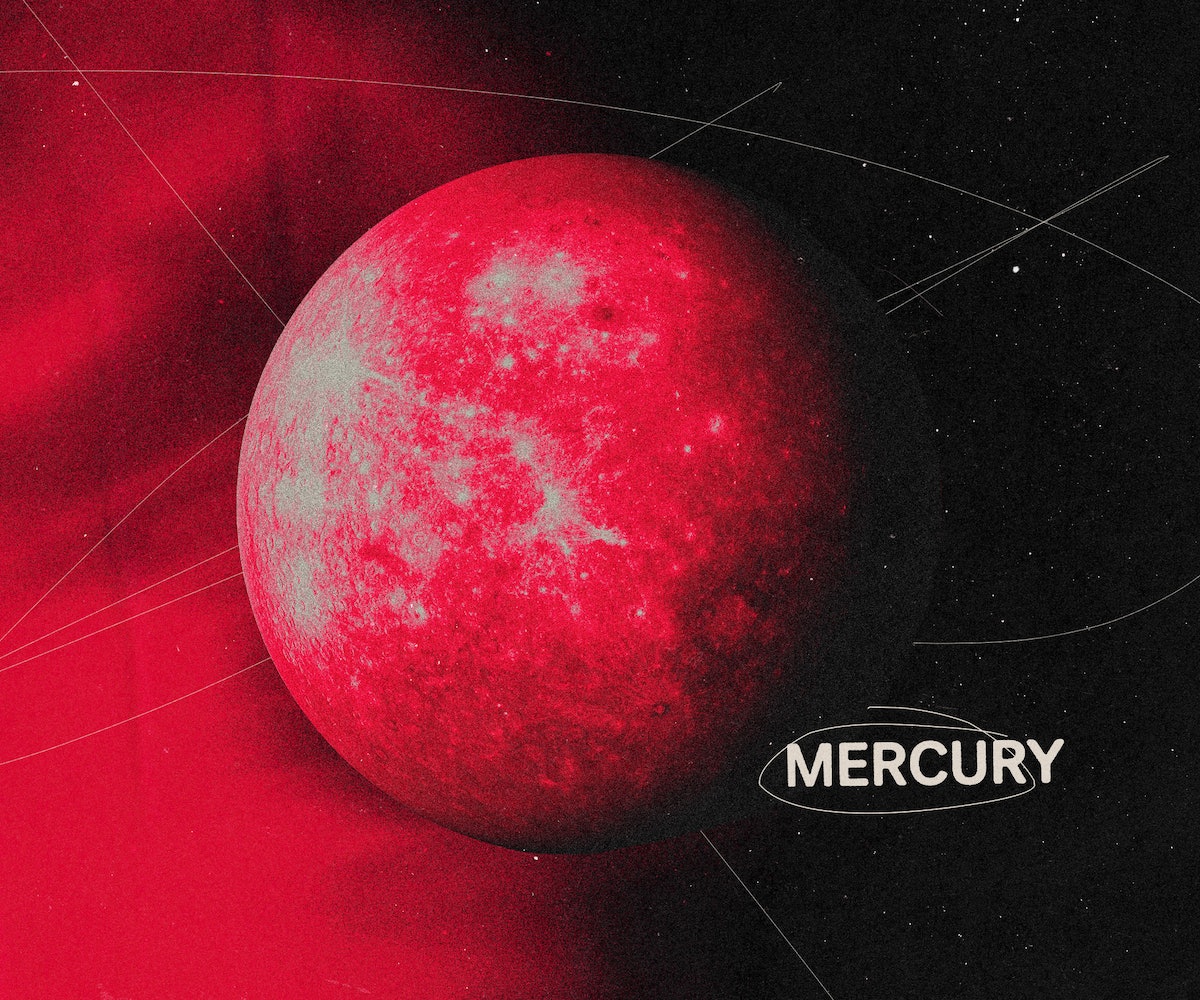 For all of astrology’s abstraction, there’s one planet that’s always down for business. Enter Mercury, the vessel of communication and action, who delivers your gifts into daily life. If your chart represents a motley crew of disparate archetypes, Mercury is the translator, the voice, the bridge which makes sense of all the noise. But based on its placement in your chart, what form will your Mercury take, and how can you best embrace its powers? Consult our guide below for all the essentials on the planet of creation and activation.

The smallest, fastest planet in our solar system, Mercury keeps close to the sun, acting as a direct bridge from the source of life to planet earth. Mercury gets its name from the messenger god, known also as Hermes, who freely traveled between realms, conversing with gods and humans, delivering the divine word above and below. The Athanassakis Orphic Hymns describes Hermes as a “man-loving prophet to mortals,” able to charm all manner of beings. Mercury acts not only as a messenger but as a psychopomp, guiding the dead through the underworld. Hermes lords over currency and coins, and is the patron god of magicians. Mercury does a lot.

As befitting its mercurial nature, then, Mercury may be the most versatile of planetary archetypes, whose role in mythos and in your personal conception is up to constant interpretation…as it should be. Suffice it to say, Mercury seeks to synthesize and deliver the gifts of your chart to the world; to find your ideal means of transmission and help you hone them; and to imbue magic into your daily rituals. In Planets in Transit, Robert Hand writes that “Mercury is the everyday routine, in that it signifies the nature of your casual interchange with the world around you.” How Mercury emerges in your chart sheds light on how you show up in the world.

Mercury rules two signs: Gemini, the sign of the messenger; and Virgo, the sign of the doer. He thrives also in Aquarius, Capricorn and Aries, and is said to languish in water signs. Consider the sign element, features and house position when understanding how your Mercury seeks to emerge in your life. Perhaps your twelfth house Mercury in Scorpio would find catharsis writing heartbreak ballads. And, with Mercury in Taurus in the 10th house, you’d do well in the director’s chair, giving orders to your underlings. Mercury reveals the challenges or open avenues available to you in the arenas of rational thought, processing and action.

Though most planets go through retrogrades — an illusory effect in which a heavenly body appears to move backwards — it’s Mercury’s lurches which receive the most bad press. At such a fast orbit around the sun, Mercury goes retrograde three or four times a year. And because Mercury rules over daily communications, transactions, and plans, its effects are felt most immediately and tangibly. Hermes is likened with other fleet-footed, silver-tongued tricksters, like Loki and Bugs Bunny. But when Mercury pulls the rug out from under your life, it’s not without purpose. The chaos wrought by a retrograde is meant to expose the fallacies, complacencies and instabilities you’ve built your life on, and force you to wake up and deal with intention. If you can learn to laugh with Mercury, it means you’re paying attention.

MERCURY AND OTHER PLANETS

In dialogue with other planets, Mercury can act as a gate, door, or translator of their themes. Look to supportive and challenging aspects to understand how your identity is projected into the world of the real and rational. Here’s how connections play out for Mercury: through conjunctions (immediate and intense alignment); trines (60 degree, collaborative angle); squares (90 degree challenge from a “backseat driver”); and oppositions (180 degree confrontation, or faceoff). Remember that harsher aspects, like squares and oppositions, often lead to growth, change, and metamorphosis; rarely is there such a thing as a “cursed” placement. As Oken warns in his Complete Astrology, “a ‘fine’ aspect does not necessarily make a fine person.”

Mercury can never stray more than 28 degrees from the sun, making it a natural best buddy to the source of life, vitality, and identity. When in separate signs or houses, the two offer a nice juxtaposition, with Mercury diversifying your style or self-presentation. When immediately conjunct, Mercury’s natural, rational processing may become egocentric and overly self-identified. Ideally, these two should present a healthy interplay between the soul and the rational mind.

How do you reconcile reason with emotion? When well-aligned, Mercury and the moon allow for a poetic use of language, a cathartic command of communicative faculties, and the ability to express your emotions directly. Challenging aspects lead to a clash between the intellectual and the spiritual, a divide which could produce interesting creative results. Let both archetypes — the feeling element and the energized actor — have space for expression, and you’ll find emotional harmony.

Because of their close proximity to the sun, Mercury and Venus always stay in close contact, like two best girlies working the room at a party full of strangers. Mercury helps Venus shape your artistic vision and deploy a perfect presentation. An exact conjunction could promise gifts of speech and social graces, but may veer into oversharing, or taking up all the air in the room. Look to the sign and house placements of these two for insight into your style and ideal modes of self-expression.

Mars acts as a captain and conqueror, launching your ambitions into the world. Mercury works to make those dreams come true, and speak for your deepest drives. When conjunct, the two can make you a direct and forceful presence, perhaps with little ability to buffer your intensity. Oppositions and squares reveal the ways that you may people-please or protect others from saying what you really mean. Healthy work between these planets will teach finesse and tact when it comes to self-advocacy.

Jupiter wants you to see the world: to travel, study and expand your reality. Mercury, the master of making arrangements, can make it happen. Teamed up, the two can align your higher calling to a practical vision; when conflicting, they may leave you scattered and unable to make a cohesive plan or finish a project. Work to refine your vision, do the necessary legwork, and confront your blind spots, and you’ll be able to make any possibility a reality.

Saturn is the master who teaches you through hard lessons. Mercury helps process and assimilate these big shifts into cognitive awareness. When the two are in harmonious alignment, they help you to synthesize any experience into wisdom. Clashes and squares, meanwhile, reveal gaps in awareness and points of willful obtuseness to the lessons life is trying to teach you. In life’s more trying arenas, Mercury works through dialogue: therapy, recovery, journaling, creativity, etc. Turn to this planet for help in dealing with Saturn’s latest trials.

As a mythic archetype, Uranus is likened to Prometheus, the great liberator who brought the gift of fire to the mortal race. Mercury and Uranus, then, can be viewed as part of a natural progression: Mercury oversees your personal sphere of influence, which Uranus then expands at a quantum level. When these two work together, they harness flashes of genius and inspiration to be shared with the world. But the two tricksters trade in chaos, and difficult placements reveal how mania, itinerancy, and instability get in the way of your own greatness.

Neptune is the dream-maker, who delivers through Mercury all higher transmissions of artistry and inspiration. If Mercury’s gifts are well-honed, it can be a powerful vessel of delivery for Neptune’s mesmerizing rays. But without proper footing, you can get lost in a project, fantasy, or idea. Make sure that your Mercury is working with tools of accountability and structure so that it isn’t subsumed in Neptune’s waves.

Pluto acts as a revelation, blowing open our underworld of secrets and personal history to set us free. When Mercury aligns with the agent of metamorphosis, the two can make for a penetrating, upfront, and confrontational outer expression. You may find yourself instigating powerful conversations with everyone you meet, changing their lives without even knowing it. Of course, as Hermes acts as the guide to the underworld, any dialogue between these planets may speak to your own calling to shepherd others (and yourself) through transformations and reckonings.

Mercury’s day is Wednesday (Miercoles in Spanish). As the god of currency and trade, Mercury loves offerings of money, and is there to help with financial transactions and investments — so long as you thank him when the cash checks. While we mortals despair over how to cope with mass information and constant communication, Mercury has a great time with email, text, and social media; feel free to let him take the reins of your correspondences. Naturally, that goes for all matters involving what the Orphic Hymns describe as his “dreaded, respected weapon of speech,” the written and spoken word.

Mercury delights in stimulating encounters, novel experiences, and new connections. When he f*cks with your life, it’s usually to break you out of stagnation or self-seriousness, and introduce you to the exciting world just outside your door. If you can feel the shadow of the trickster playing games on you, it’s likely Mercury, and it’s probably a good one. Recognize why you’re asking for it, and he’ll be satisfied.

In terms of pop culture avatars, Mercury has an infinite array of champions to choose from. Consider witty speedsters like The Flash and Spider-Man; hardass truth-tellers like Luda’s Luci LeBang or Scream’s Gail Weathers; nimble Cassandras of the future like The Terminator’s Kyle Reese; brilliant, dynamic minds like Dune’s Thufir Hawat and Harry Potter’s Hermoine Granger; and any classic trickster who stirs up conflict for the dull protagonists. In Black Panther: Wakanda Forever, Mercury majestically incarnates as Namor, the wing-footed Ocean God with an attitude. Always keep in mind this planet’s versatility, as Mercury can play the role of hierophant, psychopomp, scribe, prophet, guide, magician, sorcerer, traveler, and tradesman. Embrace your own multitudes, and you’ll become an agent worthy of its power.

NEXT UP
Astrology
How to Use Astrology to Access Past Lives
Astrology
February 2023’s Full Snow Moon in Leo Embraces The Real You
Astrology
Your February 2023 Horoscope Is A Breath Of Fresh Air
Astrology
Get To Know Aquarius, The Certified Freak Of The Zodiac
Style + Culture, delivered straight to your inbox.