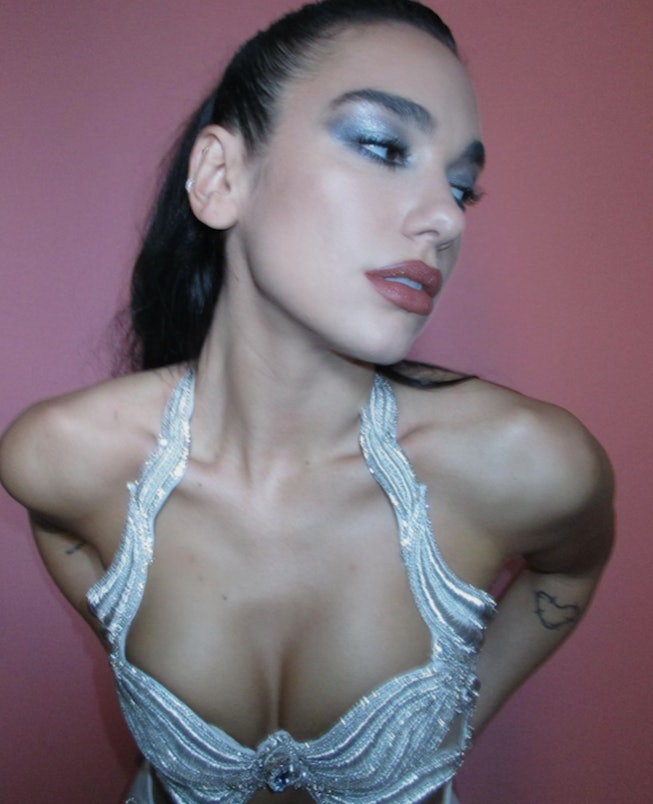 by Maria Santa Poggi
Jan. 4, 2023
We may receive a portion of sales if you purchase a product through a link in this article.

Sometimes it feels like the dawn of the 21st century is ancient history. Especially as we excavate resurfacing trendy items like Juicy Couture tracksuits, micro-mini skirts, and low rise jeans out from the depths of our closets (or from Depop for those born after 2000), the Y2K era seems like a very distant past. But one nostalgic trend in particular—blue eyeshadow—has existed long before the era of teacup dogs hanging out of oversized handbags. Over 5,000 years ago, the ancient Egyptians created eyeshadow, or at least the first known synthetic pigment: a shade known as “Egyptian Blue”. In the modern era, the blue pigment was copied by Elizabeth Taylor when she played the titular role in 1963’s Cleopatra film. Bold and blue eyeshadow became popularized in 1960s fashion through the likes models like Twiggy and the Mod makeup trend. More recently, in the 2000s, frosty blue shadow dominated music videos, TV shows, movies, and the party girl scene.

Now, blue eyeshadow is coming into its next iteration—a trend dubbed on TikTok as “washed denim eye makeup”. It is no coincidence this statement makeup trend is rising in popularity while denim-on-denim clothing is all the rage and as Diesel, a longtime denim and clothing company, has been declared one of fashion’s hottest brands. Of course a version of blue eyeshadow is gaining traction amongst a new generation, in keeping with the return of everything else Y2K-inspired.

Content creator and makeup artist, Victoria Lyn recently shared her tutorial for the look on TikTok. Lyn tells NYLON the trend owes itself to the 2000s greats: “It’s reminiscent of the OG pop culture queens like Paris Hilton, Christina Aguilera, Tyra Banks, and of course, Britney Spears.” Lyn continues, “shimmery blue was a go-to for many in the 2000s, similar to how we would wear a bronze eye look on any given day without thought.” One of Lyn’s favorite versions of the washed denim eye makeup look was Kendall Jenner's take created by makeup artist Mary Phillips. “Phillips posted an image to Instagram, explaining she even used some of her eyeshadows from the 2000s to create Kendall’s glam,” Lyn explains.

Makeup artist Alexandra French has her own spin on the new trendy blue hues. “I think of the ‘washed denim’ look as the cooler sister of the early 2000s frosted eyeshadow,” she tells NYLON. The hottest color of the moment she says is, “ a darker grey blue tone of denim blue—often matte— which pairs well with a black liner and is flattering on all skin tones.” With aesthetics like night luxe and party girl beauty trending earlier this year along with the major comeback of indie sleaze, it makes sense that a moodier eye is having a moment. “I feel like if the washed denim eye was a person she would be Effy Stonem from Skins,” Says French. The makeup artist’s favorite products for a darker denim eye include MAC Eyeshadow in Tilt, e.l.f. Cosmetics Bite Sized Eyeshadow palette in Acai You, and Sisley Paris Phyto-Eye Twist in Marine.

When Taylor Swift dons a wash of blue on her lids for her Midnights album cover, the trend is officially undeniable. Other celebrities that have been feeling blue lately include Miley Cyrus, Megan Thee Stallion, and Dua Lipa. Makeup artist Samantha Lau tells NYLON, “I find the blue eyeshdaow in the early 2000s to be more frosty.” She prefers a more modernized version that still delivers dimension and shimmer, with less ice. “I start by applying an eyeshadow primer, then sweeping a color like the Dior Denim eyeshadow on the entire lid and up to the crease, blending out the edges,” she offers. “To make it a bit special, I’ll use my ring finger to tap a little of Bodyography’s Blue Morpho glitter on the lid.” To let the eyes dazzle, Lau recommends keeping the skin fresh and the lips looking natural.

No matter what approach to the ‘washed denim’ eye makeup trend you take, one thing is clear: blue eyeshadow reigns through decades of glamorous party girl looks. In 2023, any shade of denim or any finish from frosted to matte can be your true blue.