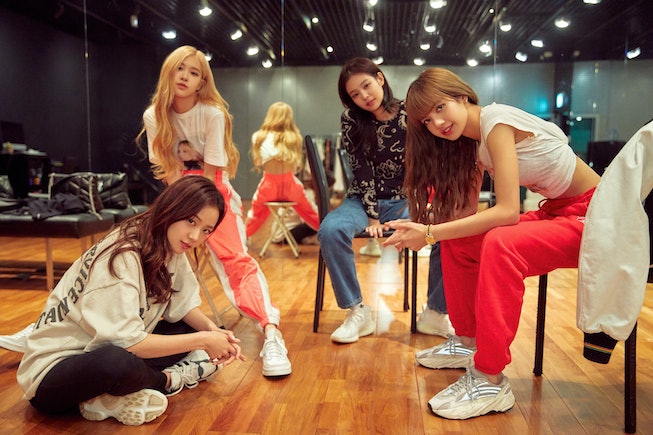 We're a month shy from Halloween, so it should come as no surprise that Netflix has lined up a number of spine-tingling titles to release across the month of October. If you were a fan of The Haunting of Hill House, get ready for The Haunting of Bly Manor, which comes from the same creative team and features some of the same actors (including NYLON It Girl Victoria Pedretti) but tells a completely new story — this one, about an au pair who moves to the middle of nowhere to take care of two orphaned children in a house with more than a few dark secrets. Similar additions include the campy 2014 film Unfriended, which turns the online chatroom into its own version of a virtual haunted house; Hubie Halloween, a holiday special starring Adam Sandler and Maya Rudolph; and the first season of Evil, a network drama from the brilliant minds behind The Good Wife, which follows a ragtag team as they investigate supernatural incidents.

Of course, not everyone wants to be spooked, and luckily, the streaming service is offering plenty of non-scary original titles to choose from, too. I really enjoyed Grand Army, a teen drama that fits comfortably between the perky optimism of Sex Education and the lurid dourness of Euphoria. Following five students at the largest public high school in Brooklyn, the series separates itself from its predecessors by taking a surprisingly nuanced look at how race, class, gender, and sexual orientation can all impact an individual's experience differently, even at the same school. Other exciting original titles include the charming Emily In Paris; The Queen's Gambit, which further proves that Anya Taylor-Joy is a real force to be reckoned with; a new show inspired by the popular Song Exploder podcast; the Deaf U docuseries, which was produced by deaf model Nyle DiMarco and follows several students enrolled at the primarily-deaf Gallaudet University; and the inventive documentary Dick Johnson Is Dead. Then, there's BLACKPINK: Light Up the Sky, which is bound to attract a huge audience given its focus on the biggest K-pop girl-group in the world — so if staying up to date on the cultural conversation is your thing, add this one to the queue immediately.

If you want to binge some good TV, however, look no further than The Parkers. Starring Mo'Nique as Nikki and Countess Vaughn as her daughter Kim, this Moesha spinoff traces the relationship between this pair when Nikki enrolls at the same college as her daughter. You also can't go wrong with the final season of newly-minted Emmy darling Schitt's Creek, which I'd safely categorize as the series' most heartwarming yet. (With the creators hinting at a possible movie, it's a good time to get up to date on all the Rose family adventures.)

Alternatively, for snazzy film fare, look out for Her, the Joaquin Phoenix-starring Spike Jonze film about a man who falls in love with his computer (voiced, naturally, by Scarlett Johansson); the six-time Oscar-nominated Moneyball, which follows Brad Pitt and Jonah Hill as a forward-thinking duo who completely reinvent the baseball recruitment process; the lesbian classic Carol; and Aaron Sorkin's latest film The Trial of the Chicago 7, which stars Sacha Baron Cohen. I highly recommend Fargo, a mid-90s film from The Coen Brothers about a man who hires two conmen to kidnap his wife so he can collect the ransom money from her father. Featuring an all-star cast of Steve Buscemi, William H. Macy, and a never-better Frances McDormand (though I must admit that her performance in Nomadland really is as good as everyone says), it's the kind of "seemingly simple plan gone completely awry" story that would later become The Coen Brothers' bread-and-butter. And with the excellent fourth season of Noah Hawley's spinoff show of the same name now firmly underway, there's never been a better time to revisit the film that inspired it all.

Check out a list of everything coming to Netflix next month below.

All Because of You — Netflix Film

Along Came a Spider

Employee of the Month

Enemy at the Gates

Ghosts of Girlfriends Past

Hunt for the Wilderpeople

The Pirates! Band of Misfits

We Have Always Lived in the Castle

You’ve Got This — Netflix Film

Vampires vs. the Bronx — Netflix Film

David Attenborough: A Life on Our Planet — Netflix Documentary

Dolly Parton: Here I Am

Walk Away From Love

To the Lake — Netflix Original

Kipo and the Age of the Wonderbeasts: Season 3 — Netflix Family

In a Valley of Violence

Someone Has to Die — Netflix Original

The Trial of the Chicago 7 — Netflix Film

My Next Guest Needs No Introduction with David Letterman: Season 3 — Netflix Original

Over the Moon — Netflix Family

Metallica Through The Never

Nobody Sleeps in the Woods Tonight — Netflix Film

The Day of the Lord — Netflix Film