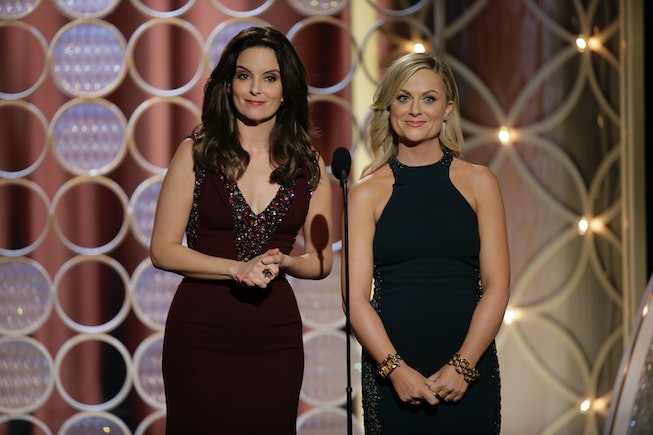 Between the I May Destroy You snub, the Emily In Paris nominations, and yesterday's reveal that the Hollywood Foreign Press Association doesn't have a single Black person in its voting body, it's an odd time to be getting "excited" about the upcoming 78th Annual Golden Globe Awards ceremony. But we'd be lying if we tried to convince ourselves that we weren't still going to end up glued to our television, glass of wine in hand, ready to yell at our screen when our favorite actor loses an award this coming Sunday.

So with that in mind, here is how you can watch this weekend's ceremony:

After being pushed back by almost two months thanks to the ongoing COVID-19 pandemic, the 2021 Golden Globes ceremony will finally air this Sunday, February 28th, at 8:00pm ET/5:00pm PT on NBC. The ceremony will be hosted by perennial funny-women Tina Fey and Amy Poehler, both returning for their fourth outings. However, unlike years past, this largely virtual ceremony will find the two comediennes hosting from opposite ends of the country, with Fey holding down the fort at New York's Rainbow Room while Poehler soaks up the rays live from the Globes' usual home at Los Angeles' Beverly Hilton.

If you don't have a cable subscription, however, do not fret. In addition to being available to watch on NBC's streaming service Peacock the next day, the Golden Globes will also be available to watch live through any number of live TV services that offer NBC amongst their included channels. A few options include Sling TV, FuboTV, Hulu with Live TV, YouTube TV, and AT&T TV. (Many of these services also offer free temporary trials, for those of you just looking for something to use for the night. But don't tell them we told you that.)

Numerous controversies aside, this Sunday night still promises to be an exciting one, with plenty of worthy nominated titles, including Chloé Zhao's current Oscar frontrunner Nomadland, Emerald Fennell's genre-defying Promising Young Woman, recent Emmy sweeper Schitt's Creek, and of course, Netflix's Anya Taylor-Joy breakout hit The Queen's Gambit. For the first time in the ceremony's history, a majority of the nominated film directors are women, with Regina King making double-history as the show's first Black woman nominee and the aforementioned Zhao as its first Asian woman nominee. Meanwhile, the one and only Jane Fonda will receive the prestigious Cecil B. DeMille Award while industry legend Norman Lear is honored with the Carol Burnett Award.

NEXT UP
Culture
The Madonna Biopic Is Being Scrapped
Entertainment
Harry Styles Is Performing At The 2023 Grammys
Culture
Kaia Gerber Won’t Stop Until She’s Cast As Patti Smith In A Biopic
Culture
The 2023 Oscar Nominations Full List Is Here
Style + Culture, delivered straight to your inbox.