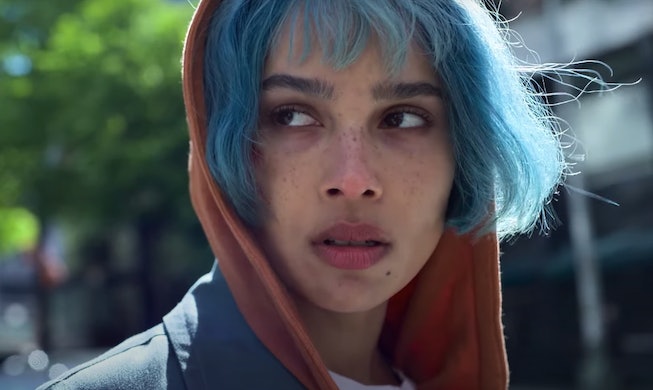 It’s been two-and-a-half years since we last got a dose of technophobic programming through Netflix’s enjoyably bleak sci-fi series Black Mirror. But thankfully, Oscar winner Steven Soderbergh has stepped up to pick up the slack left by Charlie Brooker. In the Ocean’s 11 director’s next feature, former NYLON cover star Zoë Kravitz stars as a homebound “voice stream interpreter” who’s forced to go outside after unsuccessfully trying to report a crime.

According to Variety, KIMI “centers on an agoraphobic tech worker who discovers recorded evidence of a violent crime during an ordinary data stream review and tries reporting it up the chain of command at her company. Met with resistance and bureaucracy, she realizes that in order to get involved, she will have to do the thing she fears the most — leave her apartment.”

A Seattle-based casting call further details that the film takes place during the COVID-19 pandemic, right after “the city council of Seattle passes a ‘safe zone’ law aimed at restricting the movements of the homeless population.” When Kravitz’s character ventures out of her home, she’ll find herself thrust into the streets where local activists are protesting the mandate.

Written by Jurassic Park’s David Koepp, the upcoming thriller is named after the Alexa-like smart device that Kravitz’s character blissfully uses for pretty much everything. In the recent first trailer, Kravitz can be heard asking, “Kimi, what time is it?” and requesting, “Kimi, call Dr. Burns.” Given her character’s reluctance to leave her apartment, it’s clear that she relies on the device to keep her company while she holes up inside. But as a log line for the film so eerily ponders, “What if every breath, every sound, every moment was recorded?”

The trailer offers some hints about the consequences of such surveillance — particularly when Kravitz, donning an immediately meme-able blue bobbed wig, tries to explain that she heard “what sounds like a premeditated murder.” Rather than listen to her, a higher-up (played by the one and only Rita Wilson) begins to reference her private mental health history as evidence that she might be confusing certain details about what she heard. Before long, she’s being kidnapped and thrown in the back of an unmarked van. So, I guess there’s that!

2022 is set to be a very big year for Zoë Kravitz. Shortly after KIMI in February, the actress will next be seen in Matt Reeves’ highly-anticipated, Kurt Cobain-inspired 2022 remake of The Batman, where she will play the Catwoman to Robert Pattinson’s Caped Crusader. The actress is also set to step behind the camera this year with her writing and directorial debut: the cheekily-titled Pussy Island. Described by Kravitz as a “genre-thriller [with] comedy, drama, and real heart,” the upcoming film stars Master of None breakout Naomi Ackie as a cocktail waitress who “skillfully maneuvers” her way into the inner-circle of a “possibly psychotic” billionaire tech mogul, played by none other than Kravitz’s current boyfriend Channing Tatum. Two new roles and a directorial debut? Not bad for a girl whose critically-acclaimed Hulu comedy was unceremoniously canceled after one season. (Yes, I’m still bitter about it.)

Watch the trailer for KIMI below.