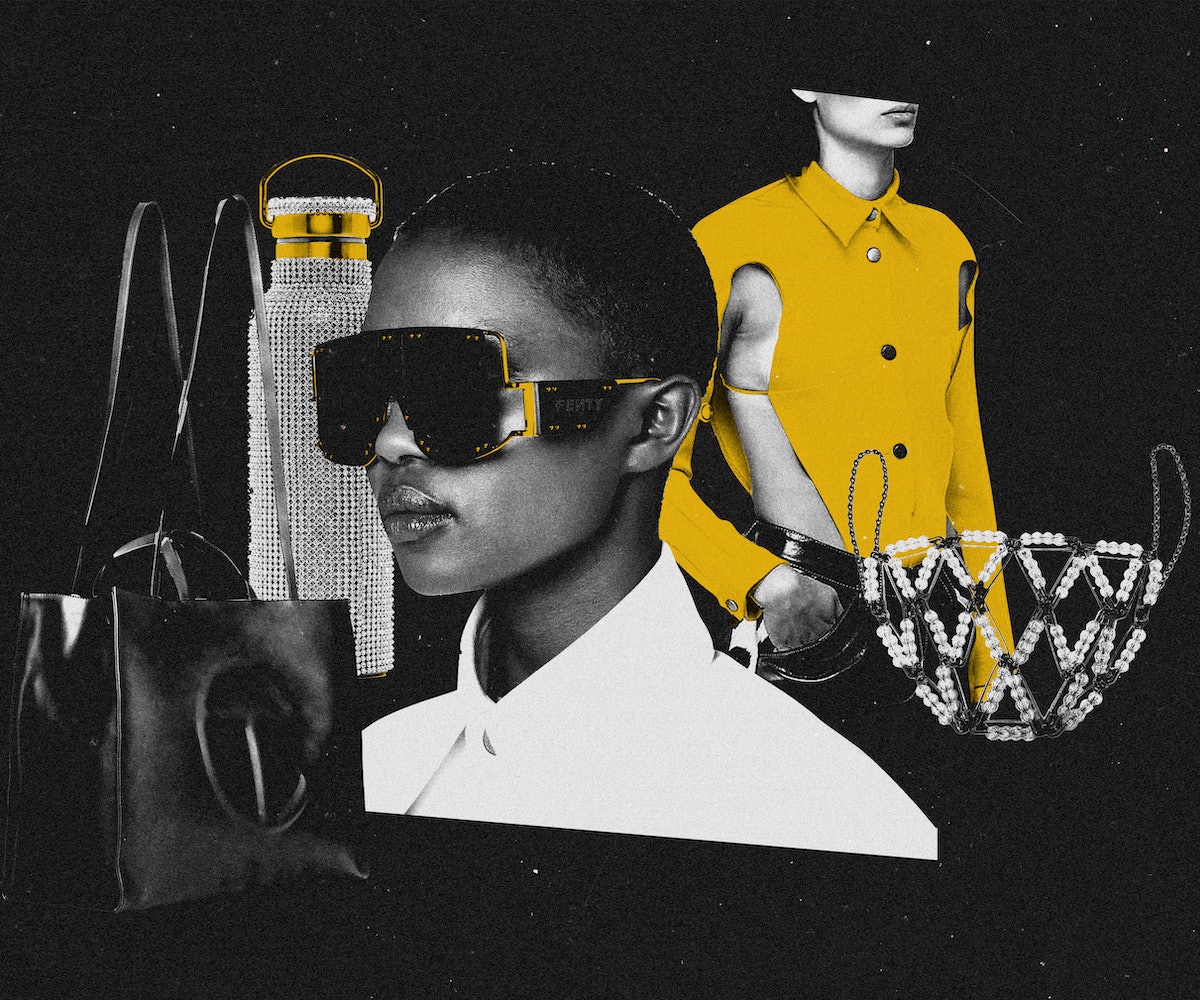 How customers define the concept of luxury in fashion is changing fast. In the wake of logomania and website-crashing drops — not to mention a global pandemic that's left most of us indoors and on Zoom for the last five months — shoppers are feeling understandably fatigued by the style status quo. Instead of continuing to spend money at the usual list of high-end brands, fashion lovers are increasingly gravitating towards small indie designers, DIY innovators, and vintage connoisseurs selling their wares on Depop.

The new luxury is less about flaunting big labels on Instagram and more about making quality investments in pieces that authentically express your personal aesthetic. It's about limited runs and unique one-offs over flashy, mass-produced items. As important social justice issues also take cultural center stage, big price tags now raise even bigger questions, like who really benefits from all that money, what communities is it being invested back into, and do that brand's values align with your own?

What's cool and relevant in fashion has always shifted as quickly as what's trending on Twitter that day, and smaller luxury brands, like the ones listed here, have proven they're nimble enough to consistently respond to their audiences' demands in real time and still leave everyone wanting much, much more.

If there's an heir to the "It" bag craze of the early aughts, it's undoubtedly designer Telfar Clemens' logo-branded shopping bags. While Telfar's motto may be "Not For You, For Everyone," when it comes to the "Bushwick Birkin" — as it's been dubbed — that statement really only applies for the brief window the brand can actually keep these bags in stock. The purse, which comes in small, medium, and large, priced from $150 to $257, respectively, has been around for the last five years, but demand for the style has been growing exponentially since January. In fact, the frenzy over their last restock crashed their site for the first time, and bags are already being resold on eBay and Grailed for up to $700.

Hanifa's Anifa Mvuemba is the Beyoncé-approved, Congolese designer that set a new bar for digital fashion shows in May when she sent her brand Pink Label Congo's sophomore collection down the runway on invisible 3D models. Launched in 2012, Hanifa has grown into a go-to label for women with curves looking for pieces that are feminine without being froofy in a range of neon-bright colors. The brand has become known for its Miya cardigan dress that Mvuemba says is designed "for all women and all sizes." And after her latest collection sold out within a week, the buzz around her line is only growing stronger. But Mvuemba says she's just getting started, as she is working on a line of shapewear and is planning to launch bridal at the end of the summer.

If you're even remotely familiar with streetwear, you've undoubtedly come across one of Sandy Liang's ubiquitous fleeces. The 29-year-old New York designer started her brand straight out of college five years ago, and has since made a name for herself by giving '90s nostalgia a playful, modern twist. Her colorful, cozy fleece outerwear has become the ultimate cool-kid staple and helped to cement the gorpcore trend amongst the fashion set. The widespread cult status of that jacket has also allowed Liang to quickly grow her brand, launching a jewelry collection in 2019 and handbags in July, along with plans to open her first physical retail store in the near future.

While VSCO girls may have made reusable metal water bottles the hottest trend of 2019, Collina Strada is responsible for making them a true high-end accessory. The brand's designer Hillary Taymour sent her Fall 2020 collection down the runway accompanied by Swarovski crystal-encrusted water bottles, hoes, and watering cans that instantly became the talk of New York Fashion Week. But it was the water bottle's appearance at the 2019 Billboard Women in Music Awards carried by Maggie Rogers down the red carpet that cemented the container as a must-have piece for every eco-conscious fashion plate.

Even before she was announced as the creative director of Yeezy Gap by Kanye West, London-based designer Mowalola Ogunlesi was already making a big name for herself straight out of Central Saint Martins. Her 2017 graduate show introduced many of the style codes she's still developing within her eponymous brand today. Her signature use of patent leathers, scandalizing cutouts, skintight tailoring, and airbrushed imagery all result in, as she described it to Vogue in 2019, "clothes you want to get f*cked in." Mowalola's sensibility for silhouettes oozing with sex appeal combined with West's love of space-age athleisure promises to make for a very compelling new chapter for the beloved mall brand.

Thanks to the Katie Holmes paparazzi snap heard around the internet last summer, New York brand Khaite became one of the hottest indie fashion labels in the industry overnight. The actress's casual endorsement also caused their cashmere "Eda" bralette to sell out within the hour. Since then, numerous celebrities, including Rihanna, have reconfirmed that cashmere lingerie is the unexpected item every person needs in their wardrobe. While many of the label's flashier indie contemporaries have struggled over the past few months, founder and creative director Catherine Holstein's brand has proven that there's always a robust market for well-made basics and timeless silhouettes crafted out of the most luxurious fabrics money can buy.

When one thinks of high-end accessories, a sock isn't necessarily the first thing that comes to mind, but Comme Si is poised to change that opinion. The brand's designer, Jenni Lee, came up with the idea for her product when she couldn't find a sustainable luxury sock for herself. The resulting line is an array of semi-sheer offerings produced in Italian factories that come in ribbed silk and Egyptian cotton in every shade from sedate neutrals to vibrant neons. They also happen to look just as good in the office as they would peeking out of platform heels during Paris Fashion Week. Think of these as the super-elevated answer to your usual three-pack of tube socks.

Gypsy Sport is known for designing apparel as eclectic and multicultural as the models it casts in its runway shows and campaigns. The brand's designer, Rio Uribe, has long been dedicated to diversity and inclusivity, and the result of those efforts is a brand that's built for all races, genders, sizes, and sexualities. Gypsy Sport's chainmail mask cover has become an understandable pandemic staple, meant to be layered over a surgical mask to turn the utilitarian into something extra special. Plus, it doesn't just look good — all proceeds from the mask are donated to the Common Thread relief fund, a CFDA initiative that gives grants to small American designers in need.

Bode mixes menswear with American craftsmanship, like quilting, embroidery, and appliqué, to create pieces that feel at once supremely modern and plucked straight off of the most expertly curated vintage rack. Emily Adams Bode has mastered the art of creating pieces that, while produced in multiples, feel deeply one-of-a-kind — like they've been passed down through families for generations. Looking at Bode's collections, it's also readily apparent what makes these luxury items, as the technical artistry is visible in every stitch and pieced-together design. While every item is a standout, Bode's coats are the brand's most popular offerings and are sure to become treasured heirlooms worn for decades to come.

Cecilie Bahnsen is known for her voluminous, sculptural prairie dresses that look like they were built for a romp in the countryside but are a favorite amongst chic city girls worldwide. Her minimalist pieces merge delicate lines and feminine details with transparent layers that add a touch of sexiness. While dresses have been the Danish designer's signature since she launched her brand in 2016, she's recently branched out into knits, separates, and more structured pieces, as well as a sustainable capsule collection of limited-edition upcycled products called "Encore" that is released every month.

Everything Rihanna touches instantaneously becomes cool, so of course, when the pop star decided to launch her luxury fashion label Fenty, it was a breath of fresh air in the stuffy halls of luxury conglomerate LVMH. RiRi, in partnership with her longtime stylist Jahleel Weaver, took everything that makes her street style so captivating and synthesized it into a collection of clothing, footwear, jewelry, and sunglasses that have quickly become universally beloved. But leave it to the bad gal to single-handedly change the entire course of a fashion trend, declaring the teeny-tiny '90s nostalgia sunglasses she once championed to be over and making huge face-obscuring frames totally in again.

Following in the footsteps of the Nike swoosh, Louis Vuitton monogram, and Supreme red box logo, Marine Serre has become synonymous with her enormously popular moon print, and the symbol itself has become an instant signifier of good taste. These days there's not a fashion show, art gallery opening, or star-studded event where you won't be able to spot the designer's signature motif splashed over long-sleeve shirts, leggings, and conceptual dresses. Even Beyoncé ordered a custom catsuit for her latest Black Is King visual album. No matter where Serre places the pattern, from a face mask to a pair of denim jeans to a dog leash, it seems the designer can do no wrong, and, clearly, her customers agree.