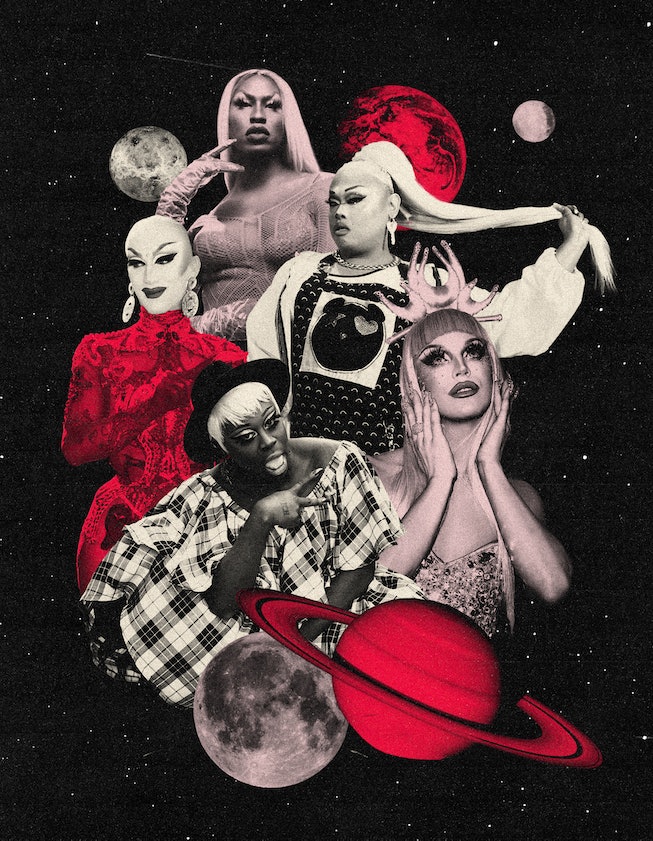 Dig deep enough into gay Reddit, and you’ll find all manner of RuPaul’s Drag Race conspiracy theories. One of the classics, likely no more than an old wives’ tale among queens, is that RuPaul casts each season with the help of an astrologer. Examining the astrology signs of the show’s many contestants does reveal trends about which signs will likely triumph on the main stage. Whether or not RuPaul is onto the star-crossed conspiracies, there’s no denying how the archetypes of each sign play out in the high stakes competition. Here’s just a few of the cosmic factors at play in the workroom.

It all begins with RuPaul, who was born with her sun and moon in Scorpio. Meet the ruler of the underworld, which exposes the mistruths, violations and artifice of our supposed reality. Scorpio observes the power dynamics in human relationships, choosing to transform them, or build a world in which it can enforce those dynamics over others. Drag Race is RuPaul’s dollhouse, and its residents must buy the rules of Ru’s artificial reality. A wink at the camera is encouraged, but those queens who bash at the walls of The Truman Show — Pearl, The Vixen — won’t be tolerated for long.

And so, in casting the show, RuPaul has largely avoided sharing the screen with other Scorpios. Out of over 150 contestants, Scorpio hasn’t a single winner, and can only claim a paltry eight contestants: Jade Sotomayor, LaShauwn Beyond, Jade Jolie, Shuga Cain, Sherry Pie, Tina Burner and Kandy Muse. Of all of them, only Sherry Pie constitutes a threat, unleashing Scorpio’s dark power to test the show’s mainstream and moral identity. And though Carson Kressley share’s Ru’s sun sign, his position as part-time co-host doesn’t threaten the show’s mainframe. Keeping the Scorpionic influence on the show is essential: Ru doesn’t need a Neo bending her matrix.

The second least-favored sign, incidentally, is Capricorn, with only nine girls in its pantheon: Victoria “Porkchop” Parker, Ongina, Honey Mahogany, Alyssa Edwards, Laganja Estranja, Aja, Ra’jah O’Hara, Silky Nutmeg Ganache and Symone. Capricorn is the sign of authority, governance, and strategy, and its emissaries are, first and foremost, survivors. Think you can go a hundred rounds with FKA Twigs and Dolly Parton? The presence of only a single Capricorn on Drag Race, All Stars, or Drag Race UK speaks to a fear of the sign’s power; RuPaul has learned, with this batch, that you can’t keep a good b*tch down. As the first-ever eliminated queen, Porkchop has built a cult personality in the show’s mythos. Alyssa Edwards came back, back, back again on All-Stars and snatched her own Netflix series. Silky proved unkillable on All Stars 6, lip-syncing six times before Eureka finally finished her. Fighting to the bitter end, Capricorn makes for an indelible reality TV contestant, but give them too much screen-time and they’ll outlive the host.

Though RuPaul may be averse to other Scorpios in the game, she favors her fellow water signs, with Cancer and Pisces racking up the highest headcount, at 18 and 19 total contestants, respectively. While air signs can prove to be obtuse and secretive, fire signs too individualistic to submit, and earth signs unbreachable in their ways, water signs embody total emotional openness. Wearing their hearts on their chests, Cancers and Pisceans make for empathic stand-ins for viewers and demonstrate the elusive “vulnerability” which RuPaul prizes above all else.

Cancer rules Drag Race, with a record three winners: Bianca Del Rio, Bob the Drag Queen, and Sasha Velour. Hailing from New York, the three embody the city’s grit and fighting spirit, a hallmark attribute of the tenacious crab. Along with notable Cancer contestants Nicole Paige Brooks, Coco Montrese, and Asia O’Hara, Bianca, Bob and Sasha each honor a specific milieu of drag history. By representing and passing on a legacy, they fulfill the primary directive of the sign of the mother.

Few Pisces have triumphed in the annals of Drag Race, with only one winner in their ranks: Bebe Zahara Benet. Sensitive and earnest artists, Pisces queens often sink under the deluge of emotional manipulation that is part and parcel of the show: think Vivacious, A’Keria C. Davenport, and Scarlet Envy. But, give them time to swim upstream, and they’ll come back with a vengeance. Absorbing and awakening to the possibilities of the show, Pisceans return to rule the All Star arena, with Chad Michaels, Alaska, and Monét X Change reclaiming the game.

TAURUS & LIBRA: DIAMONDS IN THE ROUGH

If you want a girl who brings it every ball, count on the consistency of the Leos (Alexis Mateo, Kim Chi, Yvie Oddly); meanwhile, the Sagittarians know how to blast the door down and stir the sh*t (Tatianna, Darienne Lake, Acid Betty, The Vixen). But the sine qua non of Drag Race is the classic awakening arc, in which Ru pushes a girl to bring out the diva she never knew she had within. For such narratives of becoming, look to Taurus and Libra, both ruled by Venus, the goddess of love and beauty, who acts for the sake of being seen, received, and adored. Whether they know it or not, the Taurus and Libra competitors have the potential to incarnate as a living Aphrodite, and, in the cultivation of their gifts, RuPaul mines television gold. Among the Taureans, so set in their ways at first, are Kylie Sonique Love, Tyra Sanchez, Yara Sofia, Katya, Veronica Green, and Bimini Bon Boulash. Pushed by Ru to break from their fixed cycles of self-perception, they awoke to Taurus’s gifts for embodiment and ownership, and became some of the show’s most indelible personalities. Valentina, meanwhile, showcased Taurus’s aversion to change, making for a tragic — and iconic — display of force of will set to Ariana Grande’s “Greedy.” But Valentina never needed to play by Ru’s rules; she knows that her Venus can never be dimmed.

Libra, the sign of the social climber, makes for the best reality TV trajectories. These are the girls who start in the sticks and claw their way to the top. Though Roxxxy Andrews, Ben de la Creme, and A’Whora embody the sign’s penchant for absolute perfection, it’s the more rough-’n-tumble queens who give us a full realization of their capabilities: Adore Delano, Jasmine Masters, Chi Chi Devayne, Heidi N. Closet, Vanessa Vanjie Mateo, Cheryl Hole, Tia Kofi, and Lawrence Chaney. In true Libra fashion, by the time they make it to the end of the makeover, we’ve lost some of our adoration for them. But in the Nietzchian revelation of their power, they’re simply incandescent, making any viewer believe that they too possess a superstar self waiting to emerge.