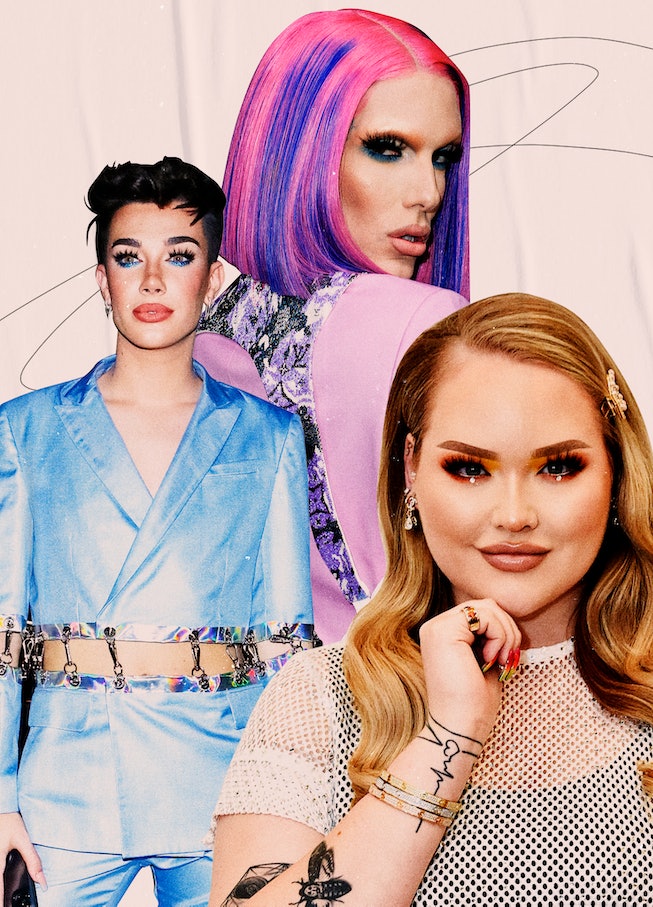 Not even a completely horrible year could stop the drama of beauty YouTube. The community that never sleeps wasn’t short on excitement in 2020, and from fights with literal children to some possible answers regarding the great Dramageddon saga, there was a lot to keep tabs on. In case you were busy living your life, or just trying to catch up on the last fight, here’s a recap of the biggest beauty YouTube feuds and drama of 2020.

The great beauty YouTube drama of 2020 featured a cast of its usual players, but this year, there were also few surprises, and with the advent of numerous celebrity beauty routines, your favorite influencers were feeling especially fired up. Below, read up on the feuds, fights, and takes you might have missed, and don't forget to like and subscribe.

Biggest Beauty YouTube Drama of 2020: NikkieTutorials and Too Faced Cosmetics

All the way back at the beginning of 2020, NikkieTutorials came out as transgender, revealing that she had made the decision to go public after someone had blackmailed her. She had said that with time, she was planning on sharing the news with followers, but as blackmailers had threatened to leak her story to the press, she ultimately decided to come forward much earlier.

The news was largely a cause for celebration among followers and other members of the industry, but Lisa Blandino, sister of Jerrod Blandino, the co-founder and chief creative officer of the beauty brand Too Faced, faced criticism after making transphobic remarks, Vox reported. After continued outcry on social media, the Too Faced founder announced that his sister was fired.

Shane Dawson was among those who chose to leave the beauty YouTube community in 2020. In a tweet that he later deleted, Dawson announced that he was moving on, calling the beauty YouTube community "a circus" and saying that he would no longer participate in or address any of the controversy related to previous accusations from both Jeffree Star and Tati Westbrook that had accused James Charles of predatory behavior, Insider reported.

However, Dawson's role in the saga wasn't entirely finished, as Westbrook broke her silence on the matter. Nearly a year after accusations against Charles were made, Westbrook released a 40-minute video in which she claimed that both Star and Dawson had fed her misinformation on Charles.

In the video, she admits that she "allowed [herself] to be worked by Shane, Jeffree, and others." She goes on to say, "I was foolish for believing them." According to Westbrook, both Star and Dawson were unhappy "standing in his [Charles] shadow on YouTube anymore. I believe James Charles was gaining more followers and receiving more views and more press faster than anyone in the history on the platform and it’s also my opinion that Jeffrey and Shane needed James marginalized and out of the way for their November launch of the conspiracy palette along with Shane’s merch."

Both Star and Dawson also faced criticism from beauty YouTuber, Kameron Lester, who claimed that the two had treated him like the "token Black kid." In an Instagram video that was shared by Lester on June 10 — and has since been removed — he addressed his friendship with Star, saying, "I just felt like it was never a friendship, it was never a friendship in the beginning to start with, it was always just something like I was the kind of like the token Black kid."

According to Lester, he felt that his relationship with Star had changed after he had refused to speak against Charles. Later, Lester was not cast in a Star campaign, a move which he attributed to his refusal to speak publicly against Charles. "I felt like he was trying to send the message in some way that I was replaceable as a Black boy. I felt like this was a game," he said. "Even with Shane Dawson posting me on his platform [last week] — I was grateful, but I felt like it was kind of to silence me to be like 'we're gonna keep giving you breadcrumbs and hanging you by a string and manipulating you so you can stay quiet.' I felt always silenced."

Going live on his TikTok in April 2020, 10-year-old Mason Disick was asked to name his favorite beauty YouTubers. Sharing his support for Charles, he called Star "spoiled af," which apparently angered the YouTuber, as he later tweeted and deleted a response to the child's comment, writing, "I had $500 in my bank account six years ago… Maybe he's confused with his own privilege versus mine being self-made, hopefully his father can educate him soon!"

Both Charles and fellow beauty YouTuber, MannyMUA apologized after they made separate comments regarding the continued launch of celebrity cosmetic brands. The comments, which were made in response to the news that Alicia Keys was collaborating with e.l.f. Cosmetics, did not specifically name Keys, but fans speculated that the star was the subject, as the remarks were made mere hours after the news was announced.

"People who do not wear makeup should not be coming out with makeup brands but that's just my opinion," Charles wrote, while MannyMUA tweeted and deleted the comment, "Does anyone else get slightly irritated when celebs come out with entire makeup lines? especially when those celebs don’t even wear makeup... i’m like girl."

The two later apologized and confirmed they were speaking about Keys. Charles would later share his thoughts on the launch of another celebrity beauty brand, Lauren Conrad Beauty. He again later apologized, attributing his comments to a bad day.

NikkieTutorials wasn't shy about sharing her feelings this year, beginning with a comment that she no longer stanned Pat McGrath. Sharing a video tour of her makeup drawer, the YouTuber explained why Pat McGrath products were at the bottom of her makeup pile, saying, "Sometimes, when I don't like a brand as much, I put another brand on top of it...Someone was very rude to me in my face once, and then I decided to un-stan."

Only a week later, the YouTuber shared her experience with meeting Ellen Degeneres for the first time, saying, "Ellen is just such a different world...It was a huge honor to be on that stage with Ellen, but it wasn't as nice as I thought."

At the beginning of November, E! News reported that Westbrook and her husband were being sued for fraud by Clark Swanson, a former business partner that the couple had worked with on Halo Beauty, a vitamin line, which focused on supplements for your hair, nails, and skin.

As per the documents obtained by E!, Swanson has accused the couple of a breach of contract, gross negligence, and fraudulent inducement.

Westbrook's attorney, Douglas Fuchs, issued a statement on the lawsuit to E!, saying, "Clark Swanson's lawsuit is meritless... his absurd claim that Tati Westbrook granted him one-third of her name, image and likeness for all time in exchange for a modest initial capital contribution. Swanson's claim is not only baseless, it is offensive and defies common sense. This is particularly true given that Swanson has received millions in profit distributions from Halo Beauty, almost exclusively due to the Westbrooks' efforts. Tati and James will vigorously defend this lawsuit and are confident that the truth will come out and they will prevail."