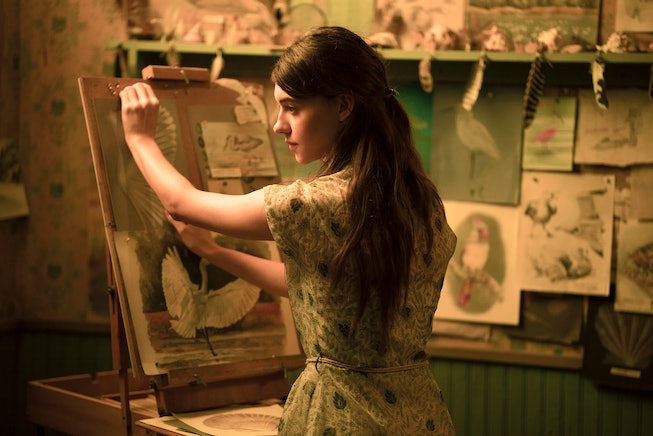 Nothing is sacred, nor is it original. In a time when everyone and their mother is making a reboot (no, I don’t think we needed a Fairly Oddparents live-action reboot...), or at least envisioning the dream cast of one (okay, Zendaya would be a great Buffy the Vampire Slayer though), we can always count on the original reboot: a good, old-fashioned book to screen adaptation, to give us characters with depth and page-turning plots.

It’s a cliché for a reason to say the book is always better than the movie. To be fair, movies and TV shows don’t have as much time as books do to get you invested or explore their characters’ psychological underpinnings. Not everything gets to be six seasons of The Sopranos! But nevertheless, we’re excited to see these literary worlds reimagined by directors like Noah Baumbach, who is directing an adaptation of the surrealist Don Delillo novel White Noise, or by actors like Pete Davison, who is starring in a Very Serious Role in an adaptation of the Vietnam War novel The Things They Carried by Tim O’Brien.

Below are 15 of the book-to-screen adaptations we’re most looking forward to this year.

Those Who Leave and Those Who Stay by Elena Ferrante

The HBO adaptation of the third book in the Neapolitan Novels, which tells the touching and violent story of two best friends growing up in post-war Naples, has Lila returning to the brutality of the neighborhood, while Elena grapples with motherhood and her profound emptiness, all in the background of political unrest. Release date: February 28, 2022

Bridgerton: The Viscount Who Loved Me by Julia Quinn

Season 2 of Bridgerton may be more about longing looks and almost kisses than in-your-face carnal pursuits, but we’re still excited about all the escapism Bridgerton offers — from cake-like dresses to string quartet versions of Alanis Morissette songs. Release date: March 25, 2022

Netflix is adapting this sweet graphic novel about a friendship-turned-maybe more between a nerd and a rugby player who meet at a British grammar school. Prepare your heart to be warmed! Release date: April 22, 2022

The Shining Girls by Lauren Beukes

Elisabeth Moss stars in the gritty Apple TV adaptation of this novel as Kirby, a Chicago Tribune archivist who endures a traumatic assault. After learning about a recent murder similar to her case, she partners up with a seasoned reporter to investigate the perpetrator’s identity. Release date: April 29, 2022

Conversations With Friends by Sally Rooney

After the 2020 Hulu adaptation of Rooney’s light-BDSM novel Normal People got everyone talking about Ireland and full frontal, the world might be ready for the next Sally Rooney adaptation. This time, it’s Conversations With Friends, her debut novel, which is about two couples navigating relationships in Northern Ireland, starring newcomer Alison Oliver, Joe Alwyn, and Jemima Kirke, in a role that absolutely nobody else could play. Release date: Spring 2022

Where The Crawdads Sing by Delia Owens

This mediocre trauma-porn novel is going to be adapted by famous literary maven Reese Witherspoon, who will produce the film starring Daisy Edgar-Jones. And if that doesn’t make pique your interest, the film already has its own Taylor Swift Song. Release date: July 22, 2022

You know the Stephen King drill. Obviously this is a horror film, this time in the form of vampires. In King’s second published novel, a writer returns to the Maine town of Jerusalem’s Lot, where he lived as a child, only to discover the residents are becoming vampires. Sadly, Robert Pattinson will not star in this adaptation. Instead, it stars Spencer Treat Clark and may still be worth watching. Release date: September 9, 2022

Just in time to have something to stream on Christmas that’s not going to rile anyone up too much, an adaptation of Matilda is coming to Netflix, starring Emma Thompson. We still love the 1996 film starring Danny Devito and Mara Wilson (whose turned out to be pleasantly well-adjusted despite her early fame), but I guess we’ll allow for a new one. Release date: December 2022

The Things They Carried by Tim O’Brien

It’s been awhile since we’ve heard from Mila Kunis, no? Luckily, we’ll see her soon in an upcoming adaptation of Luckiest Girl Alive, which tells the story of Ani FaNelli, who has buried her past and become a successful journalist — until her secrets starts resurfacing. She might not be so lucky after all... Release date: Late 2022

Noah Baumbach’s latest film will unsurprisingly star Adam Driver and Greta Gerwig, in the adaptation of this 1985 satirical postmodern novel about — what else?— children of divorce! Release date: Late 2022

Daisy Jones and the Six by Taylor Jenkins Reed

Rest assured if there’s a story about complicated upper-middle-class white women to tell, Reese Witherspoon is on the case. Her production company nabbed the rights to this novel in 2018, about the rise and fall of a fictional, iconic 1970s rock band that’s formatted like an episode of VH1’s Behind the Music. It’s set to become a 13-episode series for Amazon Studios. Release date: Late 2022

Dakota Johnson is set to star in this adaptation of a Jane Austen novel about 27-year-old Anne Elliot, who is reunited with a handsome naval captain whom she was supposed to marry eight years prior. Netflix’s Persuasion will reportedly be a “modern, witty approach,” presumably to pacify an audience who already finished Season 2 of Bridgerton. Release date: Late 2022

This biographical drama is based on the 700-plus-page 2000 novel about Marilyn Monroe, which The New Yorker called the book “the definitive study of American celebrity.” Monroe will be played by superstar Ana de Armas in the upcoming Netflix film that is apparently an NC-17 version of Marilyn’s story. Release date: Late 2022