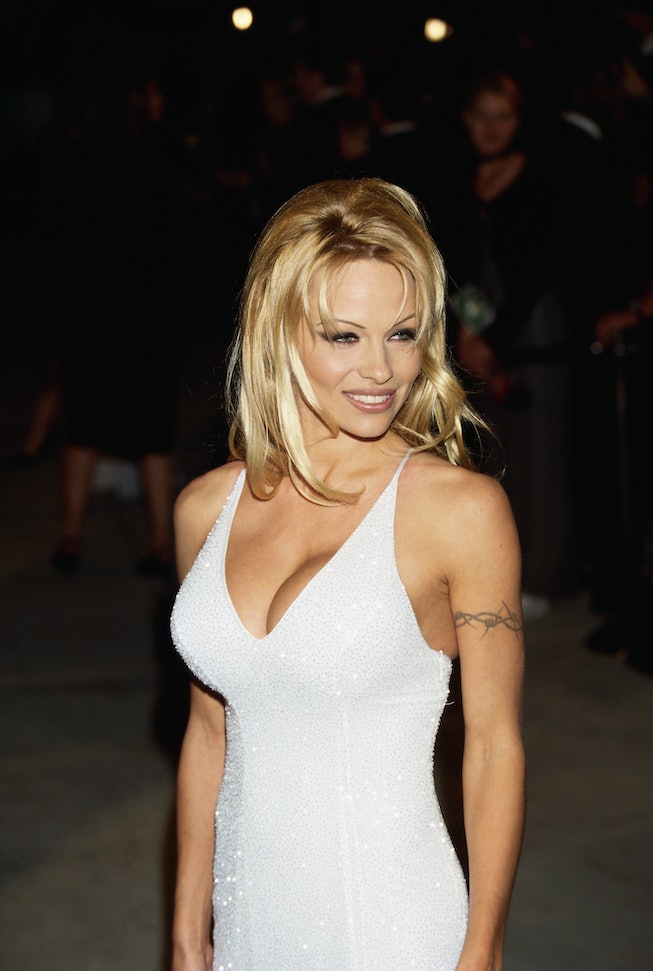 The ‘90s aesthetic is back — whether you love it or loathe it, lived through it the first time or lived after it. From hairstyles and accessories (welcome back butterfly clips and barrettes) to makeup and fashion, throwback trends from the decade are popular again. What’s old is new, and that includes ‘90s tattoos trends.

When it comes to re-embracing style from a previous decade, there are some trends that are better off staying in the past — those zigzag headbands from the ‘90s come to mind — and tattoos are no exception. In the case of body art, it’s tribal tattoos. You simply can’t discuss tattoo trends in the ‘90s without mentioning the fad that was getting so-called “tribal” patterns inked, usually on the upper arm. In fact, it was probably the defining tattoo trend of the decade, linked to the island lifestyle fad that marked much of ‘90s pop culture.

Sheer tattoo sleeve shirts from Jean Paul Gaultier's 1994 runway collection helped pave the way. And once George Clooney appeared in From Dusk Till Dawn with the solid black ink and thick precise lines of his character's tribal-style tattoo sleeve, the trend was solidified and everyone was given the green light to get one (looking at you Nick Lachey from 98 Degrees). Tribal tattoos from the ‘90s are cringey looking back, a permanent reminder of cultural amalgamation and appropriation — they are, of course, loosely inspired by tattoos from Polynesian cultures, including Maori, Hawaiian, and Tahitian, and traditions that date back thousands of years.

That being said, there were several other tattoo trends that characterized the decade, many of which are starting to reappear in tattoo parlors today. Who could forget Pamela Anderson’s inked arm band that ignited the barbed wire tattoo trend? Or the many dolphins that graced the ankles of a generation? From butterflies to suns to the infamous tramp stamp, tattoos of the ‘90s are making a comeback.

If you are in the market for a new tattoo and need some old-school inspiration, NYLON compiled a list of ‘90s tattoo trends that are definitely on the rise once again, below.

Sun tattoos were all the rage back in the day. Related to the same laid-back island life-inspired sensibility that led to tribal tattoos, as well as the iconic 1992 Sublime logo, the sun motif was everywhere. Boybander Lachey also had one of these inked on his upper arm.

A dolphin tattoo, specifically on the ankle, is a telltale sign of the mid-’90s. Chalk it up to Flipper (1996), the popularity of SeaWorld, and the same island life trend that influenced sun tattoos, the West Coast vaporwave dolphin aesthetic and colorful Lisa Frank imagery really had a hold on everyone that decade.

The iconography of butterflies screams the late 1990s and bleeds a bit into the early 2000s for the ultimate Y2K aesthetic. You can thank Mariah Carey’s 1997 album Butterfly for being one of the craze’s biggest catalysts.

People are starting to reclaim the once popular then (misogynistically) relegated to tasteless status lower back tattoo, otherwise known as the tramp stamp.