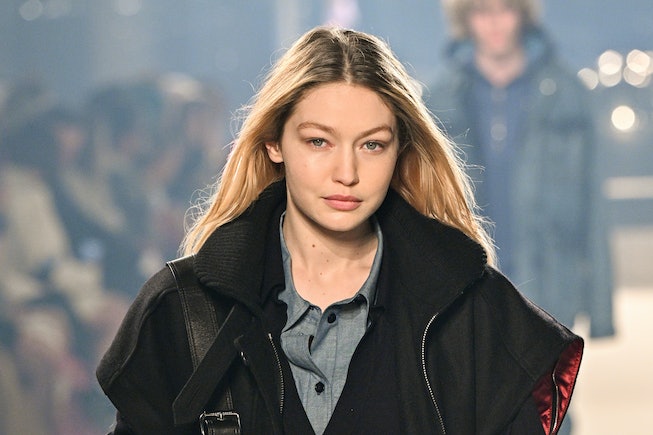 Fashion month is the industry providing a crystal ball, informing us what we will all be seeing, wearing, or at least thinking about wearing a full six months ahead. So, whether it’s the return of physics defying mini skirts or a blatant lack of under-eye concealer, the fall fashion runways showed us a few trends we wouldn’t necessarily have predicted on our own. Another way designers choose to surprise their audiences? By having models debut a brand new dye job fresh for the runway. Gigi Hadid is the latest in a line of models to do so with white platinum hair at Burberry’s Fall 2022 runway show in London.

Gigi Hadid has long been a quintessential sun-kissed California blonde. Although she did a stint as a redhead last year, she has lately been back to her dark blonde roots. This most recent fashion month she has gone through a dramatic transition into a new hyper-blonde look. Last month, she and sister Bella both bleached their eyebrows for the Versace runway show. Then, on March 11 for the Burberry show, Gigi appeared with her long blonde hair completely bleached to match her unpigmented brows and pulled back into a tight, mid-height bun.

On the Burberry runway, several models also had their hair similarly bleached to a whispery white, while others maintained their darker, higher contrast hair colors. The beauty look for the show was overall minimal, with models’ hair slicked back tight to their heads, so that their hair could barely be seen from the front. Makeup was essentially imperceptible, making the supernatural blonde hair the biggest beauty focal point of the show.

Although she has now moved on to a new and more extreme look, Gigi was early to move through the red hair trend. Copper hair has since hit a fever pitch with Zendaya, Barbie Ferreira, and Sydney Sweeney all following suit in rapid succession. Typically hair-change adverse Kendall Jenner also debuted coppery red hair during the Prada’s Fall 2022 runway show in Milan, cosigning the look as on of the season’s biggest hair trends. With Gigi being early to the red hair trend, we’ll have to wonder whether everyone will be bleaching their hair and brows into oblivion in a few months. Better get your Olaplex ready.