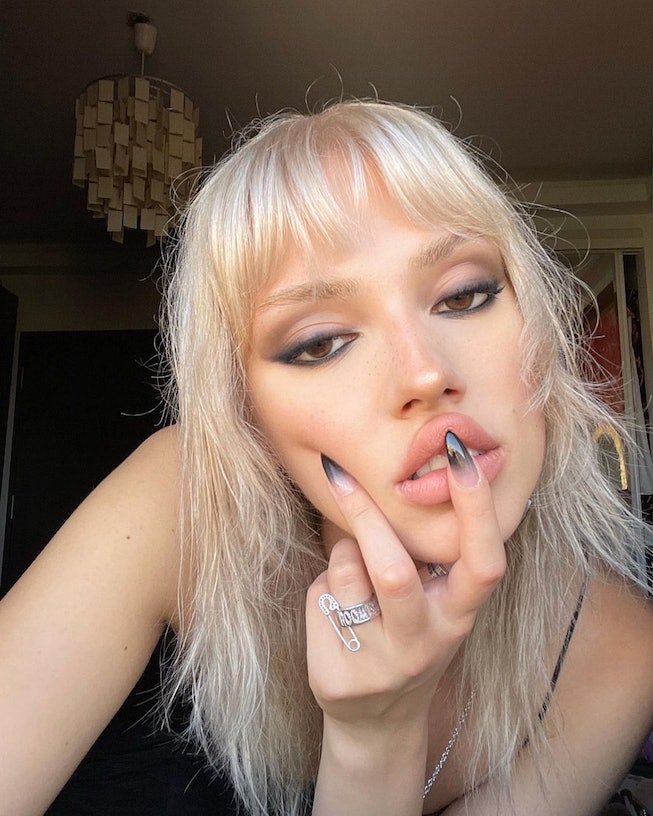 While the soft, flowery cottagecore look has been one of the reigning aesthetics for a while, and the hyper-feminine Barbiecore trend is also in full swing, it’s now time to make room for its dark counterpart — gothic fashion. ICYMI, the goth aesthetic is showing up everywhere from social media feeds to high fashion campaigns. Not to mention, it’s officially enviable to have a goth rock boyfriend (scratch that, goth rock husband). Many of us have started reaching back into the closets for anything and everything black. Whether this makes you grab for your platform boots or black kohl eyeliner, there are plenty of ways to get involved in the goth revival. One of the easiest and coolest ways to transition your style to the dark side is to dip your toe (or more literally your finger) into goth nails.

The hashtag #gothnails is already trending on TikTok — with over 24 million views and counting. What has largely influenced the re-rise in the gothic aesthetic is the overall trend of Y2K fashion, as nail artist Miya Adams explains to NYLON, meaning goth, punk, grunge, and emo early 2000s style is back as well. “I think it has to do with the younger generation that is rediscovering what goth and alternative is,” Adams says. “I’ve also noticed that a lot of newer rap music and culture takes inspiration from the goth style. I think in the last 10 years it was kind of started by rappers like Lil Peep or Trippie Red. They dress like I used to back when I was a little scene kid in middle school around 2005 to 2008.”

When it comes to goth nail art, there are endless styles to choose from based on your own preferences and style. “My style and interests draw in a lot of goth/punk and alternative clients that tend to go for my darker nail art style,” Adams says. “I think my personal style of nail I design tends to be more on the graphic side — something that makes a bold statement on nails but isn’t overly intricate.”

For some aesthetic goth nails inspo, keep reading to check out the coolest nail art of the season, from simple goth nails to maximalist designs. Just remember, goth style is all about breaking the mold, so it’s the perfect way to try out something new.

Chrome nails — and their more futuristic sibling, holographic nails — are one of the top trends for gothic manicure aesthetics these days. Giving the impression of silver, chrome allows for edgy metallic designs that look incredibly cool alongside red and black gothic color schemes.

Charms are having a major moment. “A huge trend across the nail community is using 3D elements,” Adams says. “I love to use large silver or gold metal charms in my designs.” When it comes to goth nail designs and charms, motifs such as spiderwebs, skeletons, tombstones, crosses, and roses, for example, are instant ways to make something feel gothic.

Another trending design technique seen across aesthetics right now is airbrush nail art. “Trends like tribal tattoo designs and airbrush have been at the forefront of nail trends recently,” Adams says. “I love doing both those trends but using darker colors, adding barbed wire or spider webs.” Using the airbrush style, you can incorporate gothic color schemes and symbols to really amp up your nail game.

Remember, goth doesn’t just mean black and red. Come Halloween, you’ll see more and more neon spiderweb nails that Adams was an early visionary of, but they fit the goth agenda no matter the season. Especially if you gravitate toward more colorful, vibrant designs, but still want spooky vibes, the neon goth aesthetic is a perfect style to adopt all times of the year.

Tribal designs, as Adams says, are incredibly popular among nail artists these days. And that tracks with the inspiration that’s being drawn from the ‘90s and early 2000s, when tribal designs were a plenty (tattoos, bedazzled t-shirt designs, car decals, you name it). It’s worth keeping in mind, though, that the term “tribal” and some of the designs can be culturally appropriative and conflate many diverse cultures into one mono-term, with the modern style historically drawing from different Polynesian cultures, including Hawaiian, Maori, and Tahitian. Sharp-edged and barbed wire-like designs can look incredibly cool on goth nails — just be mindful that you aren’t replicating symbols from cultural communities in ways that are insensitive.

When you think of gothic nails, you naturally think of black, which makes total sense. For a slight twist, opt for a simple black ombré polish like this vampire translucent French tip to instantly turn any outfit you’re wearing into one that would be Mistress of the Dark-approved.

Add some scaly texture or an intricate gold foil dragon pattern to your black manicure and you now have dragon nails. It’s a more unique way to jump on the animal print nail trend by mimicking an animal that’s entirely fictional.

This shape was already trending, but it goes especially well with a goth manicure. (Cue the vampire puns.) Whether you’re looking for a spooky Halloween manicure or not, this shape isn’t going away anytime soon. It’s edgy all year-round.

There’s little surprise that people are drawing inspiration from vampires and witches, with all things magic trending on social media. In fact, the witchy aesthetic already has 30 billion views on TikTok under the popular hashtag #witchtok. Some people are opting for a red base to achieve a blood-inspired manicure. The end result looks cuter than it sounds, we promise. You could even incorporate ombré, but make it a little more gruesome than usual.

NEXT UP
Beauty
11 Aquarius-Inspired Nail Art Ideas For the Unpredictable Season
Beauty
Isamaya Beauty’s New Lipstick Was Designed To “Celebrate The Male Form”
Beauty
No One Does #PamCore Beauty Better Than Pamela Anderson, Herself
Beauty
Meet Naezrah, The Abstract Makeup Artist Behind SZA’s Coolest Looks
Style + Culture, delivered straight to your inbox.

This article was originally published on Oct. 6, 2021