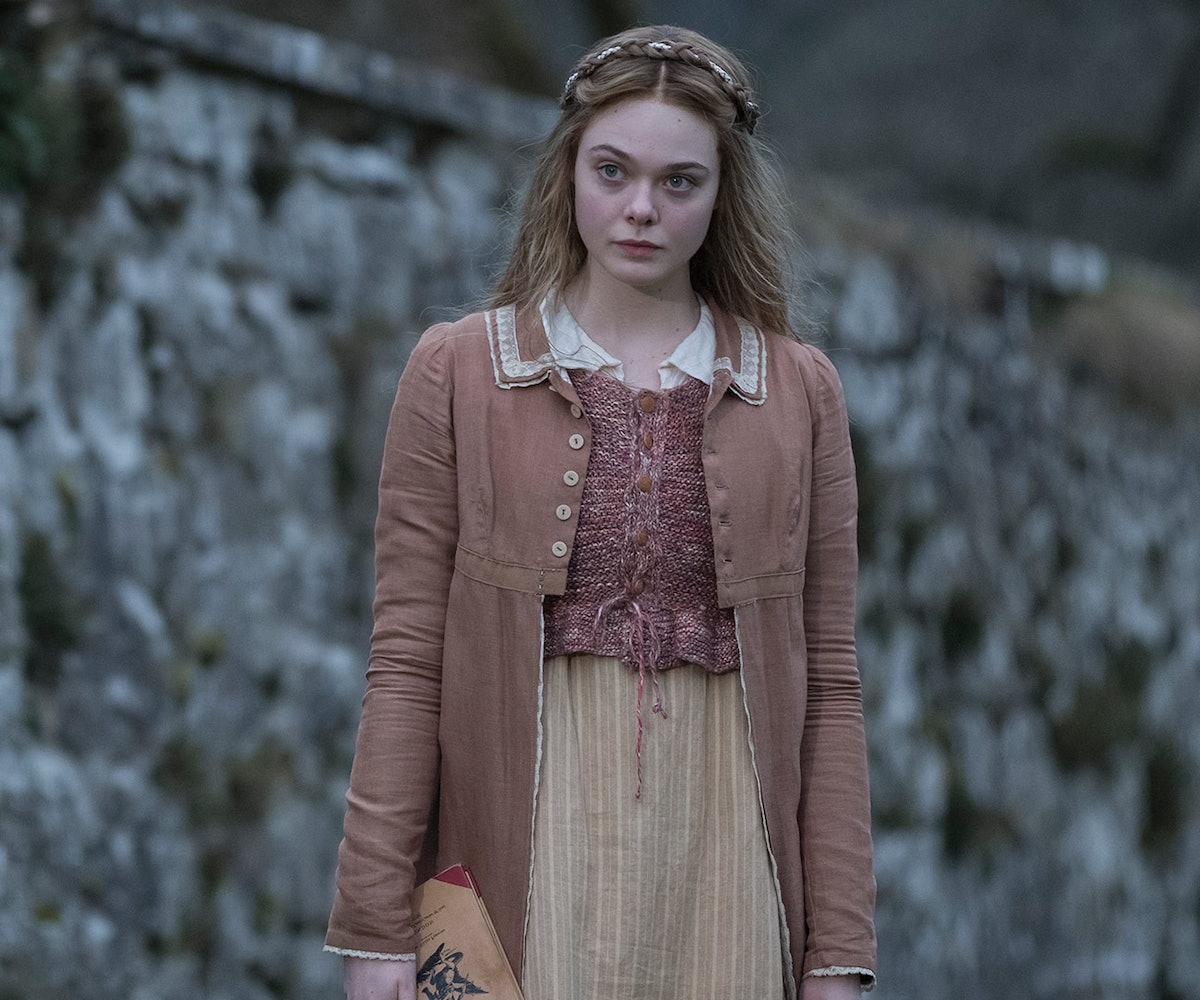 Whether you’re deeply entrenched in the black lipstick and fishnet tights of gothcore, its bookish and refined style cousin known as dark academia, or just a casual fan of all things darkness and death every once in a while, understanding iconic goth imagery is a must. Even if the full Wednesday Addams grim goth girl look isn’t for you, you simply can’t escape goth’s influence in fashion and culture.

Lorde might be ditching her old gothic tendencies for lighter, brighter, and grassier pastures, but the goth aesthetic is alive and well — or is it more appropriate to say undead and well? Either way, it has its hand in many trends today, be it Olivia Rodrigo stomping around in black leather platforms, the Victorian-esque corsets taking over TikTok, or Addison Rae and Hailey Bieber stepping out in latex dresses. If you’re in search of more gothic places to take inspo from, watching a goth movie is an instant way to get into the dark aesthetic mood regardless of whether it’s cloudy or sunny outside.

Goth films are known for their eerie, angsty, and horror-adjacent imagery, typically adorned in black and dark hues. But alongside being gloomy and grim, the goth genre is also associated with romance: Think songs by The Cure and Pale Waves, Mary Shelley’s Frankenstein, and, of course, Twilight. Dark romanticism and fantasy are what complicates and deepens so much of the gothic genre, and also make it perfectly suitable outside of spooky season for year-round macabre moodiness.

Here are 17 goth movies to binge on both the sunniest of days and gloomiest of evenings.

Mary Shelley reigns as the queen of the gothic genre, which is why a story written about her, as opposed to one written by her, makes for one of the best goth movies you can watch anytime of year. This version of the story of the dramatic and passionate Frankenstein author shows us a new and different side to Shelley, as portrayed by Elle Fanning. With themes of angst and radicalism, the film features forbidden love and modern rebellion, all the while portraying the 19th century gothic girl at her finest. (Amazon Prime)

Telekinesis, school uniforms, spells, general witchiness, and more — this cult film speaks to everyone’s inner teenage girl and is arguably the ultimate representation of ‘90s goth. The Craft follows four outcast high schoolers as they discover their supernatural spirit powers and take revenge on those who have wronged them. Let's call the corners, girls. (Hulu)

An iconic goth film, Beetlejuice is a dark comedy with the perfect balance of playful and horror-filled elements to make this movie a cult-favorite classic. With ghosts, black wardrobes, and more, Beetlejuice is a movie about two families, one ghost family and one human family, living in the same spooky house. Whether it’s Winona Ryder’s (one of cinema’s most quintessential goth girls) witchy bangs, a truly inspired version of “Day-o,” or Catherine O’Hara dressed in all black, this movie brings all the gothic themes of death and dark imagery while still staying light and funny. Shout “Beetlejuice” three times! (Amazon Prime)

While both the original Addams Family and its sequel are perfect goth movies, there’s something about the latter taking place at a summer camp, where ultimate goth girl Wednesday Addams teaches us all a lesson about how to build a killer bonfire, that makes this particular film fitting for year-round goth fare. After all, the goth aesthetic isn’t something seasonal — true gothic imagery can take place rain, cloud, or shine. (Amazon Prime)

This inspirational goth movie screams “follow your dreams.” Gypsy, a small-town teenage outcast, hits the road with her fellow goth best friend and heads to New York City to celebrate her idol, Stevie Nicks, and a club event called Night of 1,000 Stevies. Gypsy 83 is the all-too-relatable '90s film that will make you laugh, cry, and want to put on black lipstick, wear crushed velvet, and take a road trip ASAP. This goth film is a meditation on embracing who you are in all your glory. (Amazon Prime)

Based on the novel by James O’Barr, The Crow is a dark fantasy classic with a grim and morbid aesthetic, thanks to supernatural antihero Eric Draven (Brandon Lee). Featuring Lee’s final performance before he died on the set of the film in a horrible accident, The Crow remains one of the most legendary goth movies of all time. Watch as this macabre tale follows its gothic protagonist rising from the grave and seeking vengeance against the mobsters who killed him and his wife. (Paramount+)

Based on the novel by Jeffrey Eugenides, The Virgin Suicides is a cult Sofia Coppola-directed film that puts a tragic spin on a group of sisters who rebel against their religious and overprotective parents. Taking place in 1970s suburbia, the story follows the lives of these repressed, sheltered girls to their chilling and gothic ends, as narrated by a group of boys who are obsessed with the five sisters. (Paramount+)

This indie movie channels a classic homecoming story, with a dysfunctional family and an added gothic twist. Addison Timlin stars as Colleen, a goth-girl-turned-nun, who goes home to visit her family and see her older brother, who returned from the Iraq war with serious crippling injuries. Colleen returns to find her black, gothic room untouched and realizes it may be harder than she hoped to shed her past identity. (Amazon Prime)

Another Winona Ryder-Tim Burton film, Edward Scissorhands is a gothic love story between a human and whatever kind of steely, scissor-handed humanoid Edward is. While twisted and bizarre, the gothic ‘90s film is also filled with whimsical pastel suburbia costumes and sets, as well as myriad comic and romantic layers. (Hulu)

This zombie-filled horror comedy brings a new meaning to goth romance. Warm Bodies tells the story of a young zombie (Nicholas Hoult) wandering through life — or, rather, un-death — who ends up falling in love with a human girl (Teresa Palmer) whose father leads an anti-zombie group. It’s basically The Walking Dead meets Romeo and Juliet. (HBO Max)

This '70s horror comedy cult classic is filled with genius humor, catchy tunes, and highly raunchy jokes. The black, sparkly outfits, eerie mansion, and fierce one-liners are just the cherries on top of this iconic cinematic cake. Just get ready to learn to dance the "Time Warp." (HBO Max)

Donnie Darko is a coming-of-age story set in the ‘80s with a six-foot-tall bunny named Frank — talk about unsettling. As the titular character in this goth film with a cult following, a young Jake Gyllenhaal gives a compelling performance with the perfect amount of teenage angst. It also features the ultimate teen goth romance anthem, Joy Division's "Love Will Tear Us Apart." (Amazon Prime)

Another '90s classic, I Know What You Did Last Summer is the quintessential teenage mystery film that set the stage for so many other coming-of-age mystery-thrillers to follow suit. Starring four of the era's icons (Jennifer Love Hewitt, Sarah Michelle Gellar, Freddie Prinze Jr., and Ryan Phillippe), this hot, dark summer movie tells the story of four teenagers who are threatened to be exposed for a crime they committed, you guessed it, the summer before. (Peacock)

Yet another Winona Ryder film is among the best goth movies, as if you needed another reason to recognize her as one of the most iconic goth girls in film of all time. In this ‘80s dark, macabre comedy, high schooler Veronica (Ryder) seeks to take down a popular but socially cruel group of girls all named Heather with the help of her new boyfriend, J.D. (Christian Slater). Soon, however, she discovers J.D.’s intentions are far more sociopathic and sinister than she anticipated. From start to finish, Heathers sits somewhere between horrifying and hilarious. (Hulu)

Tim Burton is a master at goth iconography, which is why his stop-motion animated film Corpse Bride is one of the best, most approachable movies on this list, because technically it’s a children’s movie. Just as a young man named Victor is about to get married to his betrothed, he is pulled into the underworld by a mysterious corpse bride who wants to marry him instead, after she was murdered following her own elopement. (HBO Max)

Love it or hate it, you can’t deny that the Twilight saga has some of the best gothic themes of contemporary storytelling and film, and its moody cinematography and angsty soundtrack are unmatched. Watch as high school student Bella Swan (Kristen Stewart) is thrust into a romance with the vampire Edward Cullen (Robert Pattinson), as well as a world of supernatural folklore and threats come to life. (Netflix)

NEXT UP
Culture
The Madonna Biopic Is Being Scrapped
Culture
Kaia Gerber Won’t Stop Until She’s Cast As Patti Smith In A Biopic
Culture
The 2023 Oscar Nominations Full List Is Here
Beauty
No One Does #PamCore Beauty Better Than Pamela Anderson, Herself
Style + Culture, delivered straight to your inbox.

This article was originally published on July 4, 2018