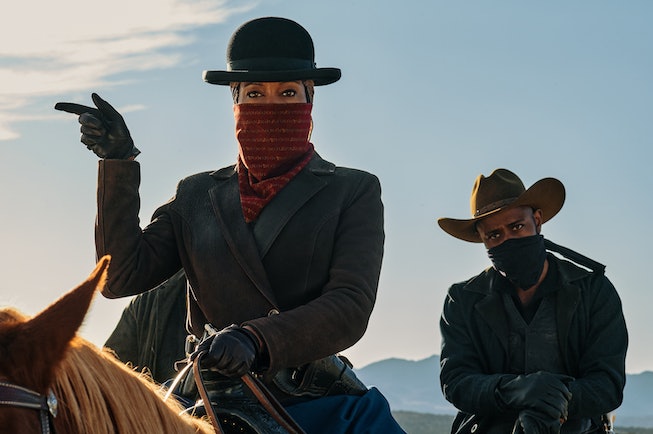 As temperatures drop and outdoor activities begin to wane in their appeal, many of us will find ourselves spending more and more time inside, glued to our television, desperate for something interesting to watch. Thankfully, Netflix has prepared for this very moment — in November, the streaming service plans to keep us occupied with an extensive array of new titles to choose from.

November has always been a huge release month for awards bait films, so it’s no surprise that Netflix — now a huge (and more importantly, respected) player in the race — is gearing up to drop several new films they hope will pop up on the campaign trail to Hollywood’s biggest night.

Top of list is The Harder They Fall, an ensemble Western starring a splashy cast of exclusively Black A-List stars. Any movie starring Oscar winner Regina King and former Sexiest Man Alive Idris Elba would already be a hit in my book. But throw in Judas and the Black Messiah Oscar nominee LaKeith Stanfield, Da 5 Bloods star Delroy Lindo, Lovecraft Country Emmy nominee Jonathan Majors, and Atlanta Emmy nominee Zazie Beetz, and it’s no surprise that the film, which premiered earlier this month at the BFI London Film Festival, is already riding a wave of critical acclaim.

Another potential awards contender arrives in the form of Passing, the directorial debut from Vicky Cristina Barcelona actress Rebecca Hall. An adaptation of Nella Larsen’s compelling novel of the same name, Passing stars queer Marvel queen Tessa Thompson and Loving Oscar nominee Ruth Negga as two light-skinned Black women living on opposite sides of the color line in 1920s Harlem. Following its world premiere this January at Sundance, I praised the “moving” black-and-white film as a “complicated tale of desire, racism, deception, and the lies we tell ourselves to feel better about our place in the world.”

Directorial debuts seem to be trending this month. Also on the docket is tick, tick… BOOM!, the feature directorial debut from Lin-Manuel Miranda. An adaptation of Jonathan Larson’s autobiographical musical about an aspiring theater composer desperate to create something meaningful before his 30th birthday, this film will be the second of two that might bring Andrew Garfield into the awards conversations. (The first is The Eyes of Tammy Faye.)

Finally, there’s Bruised, the highly-anticipated directorial debut of Halle Berry, which stars the Oscar winner as an aging MMA fighter forced to contend with the surprise return of the son she gave up for adoption six years before.

Most exciting on the TV side is the arrival of the streamer’s live-action reboot of Cowboy Bebop, which stars Harold & Kumar star John Cho as our favorite bounty hunter Spike, Daniella Pineda as Faye Valentine, Mustafa Shakir as Jet Black, Alex Hassell as Vicious, and Mason Alexander Park as Gren. While reboots of old classics (particularly beloved anime) can often be hit-or-miss, Netflix’s update seems to at least be staying true to the best elements of the original. I mean, just look at this opening credits sequence!

This month also marks the final return of Narcos: Mexico, which will conclude with this third season. The popular spinoff of Netflix’s original drug cartel hit Narcos (famously immortalized in a SZA song) has largely maintained its predecessor’s breakneck momentum, no doubt thanks to another terrific lead performance from another terrifically attractive Latin American actor. To go from Pedro Pascal to Diego Luna? That casting director needs a special Emmy.

If you want to relax, however, you can get excited about the fifth season of Big Mouth (which will introduce a new breed of sassy creatures in the form of “Love Bugs” and “Hate Worms”) and the second season of hit docuseries Tiger King (which will certainly dominate internet discourse for at least a week or two).

Still, I personally recommend the sophomore season of Gentefied. As a noted fan of the first season of this quietly hilarious dramedy about gentrification and Latinx identity, I am very pleased to report that season two of the Los Angeles-based hit continues to delight. For some authentic Latinx storytelling by a predominantly Latinx team, you can’t do better than this.

Below, find a full list of everything coming to Netflix next month.

· Falling in Love Like A Romantic Drama: Multiple Seasons

· Tear Along the Dotted Line: Season 1