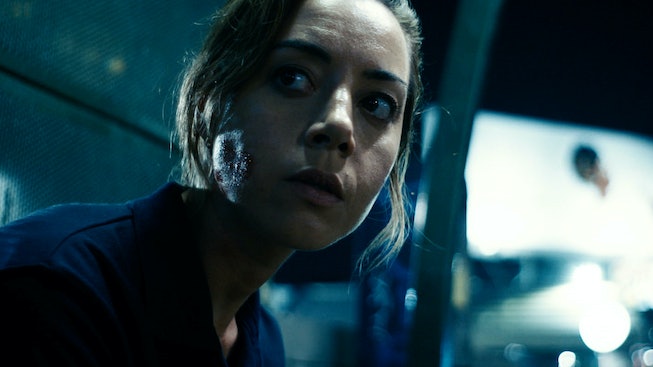 Thursday, January 20th marks the official start of the 2022 Sundance Film Festival, and while many filmmakers, actors, producers, buyers, and would-be attendees may be sad that all in-person events for the Utah-based film celebration have been canceled (thanks a lot, Omicron), the rest of us can get excited about the fact that, after the success of last year’s virtual festival, organizers had already planned for virtual attendance this year too. That means, no matter where you are in the world, you, too, can check out any of the titles on this year’s expansive lineup. For info on how to buy tickets and attend virtual Sundance premieres, head here.

Thankfully, Sundance has something for everyone. Splashy premieres include real-life story 892, about a Black veteran who holds people hostage in a Wells Fargo bank after he’s abandoned by the country he fought to protect, and abortion drama Call Jane, which was directed by Carol writer Phyllis Nagy and stars Elizabeth Banks. Documentary nerds can look forward to stories about volcanic explosions (Fire of Love), circus freakdom (I Didn’t See You There), senior citizen dance teams (Calendar Girls), and even...TikTok (TikTok, Boom.). Then, of course, there’s the always-popular horror films — one of which may or may not star Sebastian Stan as a suave cannibal. (Seriously, I have no idea if that’s what it’s about, but just read the synopsis for Fresh.)

Of course, every year, some films rise to the top of our anticipation heap, and below, you can find the ten films I’m most excited to watch over the next ten days, listed in alphabetical order.

In July, Keke Palmer will take center-stage as one of the leads in Jordan Peele’s third feature Nope. But before that, the beloved Nickelodeon alum will appear in Alice, the debut feature by Variety Director to Watch Krystin Ver Linden. Playing a character inspired by Pam Grier, Palmer’s Alice is an enslaved woman who escapes her plantation in antebellum Georgia, links up with an activist (played by Common), and quickly discovers a surprising truth: the year is actually 1973 and slavery has been outlawed. Inspired by real accounts, Alice updates the standard slave drama genre by abandoning the traditional victimization narrative in favor of something more uplifting. “It tackles the harsh realities of slavery and white supremacy while also offering inspiration and vindication,” Palmer told Deadline of the project in 2020. “I don’t want anyone to leave the theater feeling debilitated, I want them to feel empowered.”

I first took notice of Cooper Raiff after his debut feature received near-universal acclaim despite its deliberately off-putting title: Shithouse. That delightful comedy, about an uncool college freshman who forms an unexpected bond with his resident advisor, premiered at the virtual 2020 edition of SXSW, where it went on to win the Grand Jury Prize for Best Narrative Film. Two years later, Raiff is back with his sophomore feature, another film he stars in, playing a character that very well could be an extension of his protagonist in Shithouse. Centered on the fresh-out-of-college 22-year-old Andrew, Cha Cha Real Smooth aims to tackle the plight of post-graduation malaise by focusing on Andrew’s aimlessness as he takes a low-stakes job as the “party-starter” for bar and bat mitzvahs. But at its heart, this new film is really a rom-com, and when Andrew meets a mom (Dakota Johnson) at one of these parties, he begins to reconsider his ultimate goals. Part of what made Shithouse so great was the clear empathy it had for its characters, even in a simple story about college. Let’s hope Cha Cha follows suit.

For years, I have been shouting out into the void about my bottomless appreciation for The Art of Self-Defense, the 2019 martial arts film I once described as a “darkly hilarious, daringly subversive, and all-around brilliantly scathing critique of toxic masculinity.” Star Jesse Eisenberg has received the bulk of my praise, but equal kudos are owed to director Riley Stearns, who effectively established the tone that made the film’s token droll humor shine. Stearns has been relatively quiet since that breakout, but now, finally, he’s back with his followup feature. And while Dual finds the director stepping into the unfamiliar waters of sci-fi, its plot — about a woman who, after signing up to be cloned after hearing that she’s going to die, is forced to battle her clone in a fight-to-the-death once she realizes she’s not sick after all — feels right on brand for the quirky director. I’m excited to see Karen Gillan play against herself as both the woman and her clone, but I’m even more excited to see Breaking Bad’s Aaron Paul as her husband.

I’m a sucker for a movie with a to-the-point title — please give me the basis of your plot before I’ve even pressed play on the trailer! In that way, of course I’m hyped for Emily The Criminal, which expectedly tells the story of Emily and how she becomes, well, a criminal. Former NYLON cover girl Aubrey Plaza plays Emily, a woman riddled with student loan debt (who among us) and very little job prospects thanks to her criminal record. Left with no other options, Emily turns to credit card fraud and slowly but surely finds herself getting off on the high-risk/high-reward world of white-collar crime. The debut feature of John Patton Ford, Emily the Criminal arrives over a decade after his debut short Patrol — and if that film gave any indication about the director’s ability to tell a story about a slow descent into complete chaos, we’re in for a treat.

Honk For Jesus. Save Your Soul. and Master

After the back-to-back hits that were Girls Trip and Support the Girls (and, yes, also Little), I’ve been waiting for Regina Hall’s next big movie moment. Alas, Sundance 2022, which features not one but two starring vehicles for the Spirit Award nominee, seems like the place where that moment will take flight. The first film, Honk For Jesus. Save Your Soul., feels like familiar comedic territory for the actress: a mockumentary based on director Adamma Ebo’s 2018 short of the same name, the film stars Hall as the First Lady of a Southern Baptist megachurch who is forced to pick up the pieces after her husband (played by Emmy winner Sterling K. Brown) is involved in a scandal that forces their church to close temporarily. Hall’s other film, meanwhile, seems to cover slightly darker — but no less interesting — territory. Mariama Diallo’s Master stars Hall as the titular Dean of Students at an elite New England university who starts being haunted by supernatural manifestations of the school’s racist past. Described as an “ingenious blend of horror, drama, psychological thriller, and social critique,” Master could very well be the next “elevated horror” breakout of Sundance — now considered the festival to find such gems.

jeen-yuhs: A Kanye Trilogy and We Need to Talk About Cosby

With films about abortion rights (The Janes), legendary comedians (Lucy & Desi), gender affirmation surgery (Framing Agnes), and yet another look at Miss Diana Spencer (The Princess), it’s clear that the documentary section of Sundance 2022 is already jam-packed with need-to-see titles. Still, few documentaries on the lineup feel as timely as jeen-yuhs: A Kanye Trilogy and We Need to Talk About Cosby. Both centered on controversial Black men, these docuseries will surely be two of the most talked-about at the festival. Given that Kanye West is behind jeen-yuhs himself, it’s safe to assume that the upcoming Netflix special won’t dive too deeply into its subject’s plentiful controversies, but given the nearly 23 years’ worth of footage directors Coodie & Chike had to work from (they started filming “Ye” in 1998), I’m sure we’ll be treated to some new information about the man behind my favorite album of all time. On the other hand, We Need to Talk About Cosby only exists because of its subject’s controversies. Directed by United Shades of America’s W. Kamau Bell, this Showtime docuseries confronts head-on what Bill Cosby’s decades of sexual misconduct reveal about the soul of America. With interviews from Cosby collaborators and even some of his survivors, this special promises to be a vital (if difficult-to-watch) examination of one of our nation’s most famous comedians.

As controversial as she is, I have a very soft spot in my heart for the work of Lena Dunham. While I don’t acknowledge the ill-conceived Camping, I’ve seen Tiny Furniture more times than I care to admit and am a very vocal Girls apologist (though the idea of an And Just Like That…-style reboot of the HBO classic rubs me the wrong way). So, naturally, I’ve been looking forward to Dunham’s long-awaited followup feature, Sharp Stick, which sounds like an appropriate extension of the world she’s proven again and again she knows best. Centered on 26-year-old virgin Sarah Jo (Looking for Alaska’s Kristine Froseth), the film follows as she embarks on a passionate but doomed affair with the older father of the boy she serves as a caregiver for. The fact that said “older father” is played by perennial hottie (and Hot Ones MVP) Jon Bernthal should be enough to entice you, but if not, additional cast-members include Taylour Paige, Jennifer Jason Leigh, Tommy Dorfman, and Dunham herself. I don’t know about you, but I’m sold.

When You Finish Saving the World

While Riley Kearns premieres the followup feature to The Art of Self-Defense, its star, Jesse Eisenberg, is set to premiere his own first feature — a filmed adaptation of his Audie Award-winning audio-play When You Finish Saving the World. A generational divide drama centered on the complicated relationship between a mother and her teenage son, the film tells the story of Ziggy (Stranger Things’ Finn Wolfhard, who played the same role in the audio-drama), a high school student who performs folk-rock songs to a large online fanbase, and Evelyn (Julianne Moore), the owner of a domestic abuse survivor shelter who struggles to understand her son’s budding fame. Already known for his quirky on-screen characters, if Eisenberg can inject even half of that energy into his duties behind the camera, this update to his already critically-acclaimed audio-play should mark him as a rising writer-director to watch.