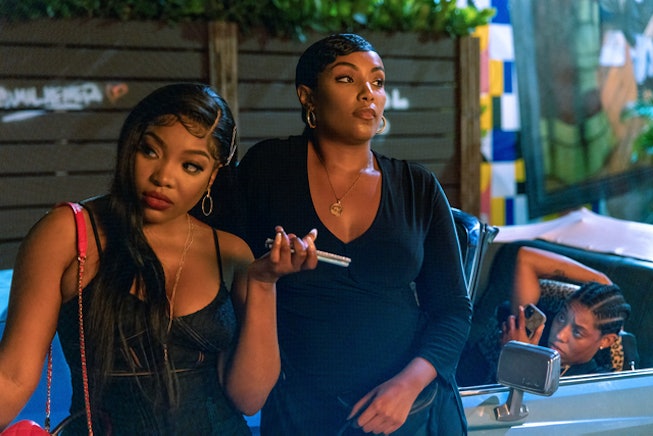 Warning: Spoilers for the first season of Rap Sh!t to follow.

While working on the Emmy-winning HBO comedy Insecure, creator and star Issa Rae heard one of her “favorite [male] producers” make an offensive comment about the state of female rap. “It was about how women today only rap about their pussies,” Rae recalls to me over a recent Zoom call. “I was just like, Man, that is so f*cking unfair. You know, leave it to a man to criticize what women are doing right now, when they're actually having the best time.” The sexist narrow-mindedness of the producer’s comment was disappointing for Rae, to say the least, but it also sparked an idea. Already a noted fan of the genre (Saweetie, Baby Tate, and Rico Nasty are just a few of the rapstresses whose songs have landed on Insecure’s soundtracks), Rae, who had always wanted to create something set in that world and was in the market for a new project to follow Insecure, settled on the concept for what would eventually become Rap Sh!t.

A riotous reunion tale about two estranged friends who attempt to make it big as a rap group in Miami, Rap Shit is one of the year’s most distinctive new comedies. Loosely based on the story of Miami rap duo City Girls (who both serve as co-executive producers), the HBO Max series is, at once, a hilarious romp about life in Black Miami, a touching portrait of the ups-and-downs of friendship, and an informative examination into the ins-and-outs of the modern music landscape. This last part feels particularly salient: like other series about Southern rap music (FX’s Atlanta and Starz’s P-Valley come to mind), Rap Sh!t knows that the hypest tracks get big on strip-club stages first, that the realest rappers can always be found in bottle-filled VIP club booths, and that the same person responsible for getting your music passed to the DJ might also be pimping out sex workers on the side. The eight-episode series feels impressively clear-eyed about its own world, even if its central aspiring stars, Shawna and Mia, sometimes aren’t. And though its two leads (Keep It podcast host Aida Osman and Love and Hip-Hop: Miami star KaMillion) are both new to scripted work, their on-screen chemistry is dynamite.

Which is important, since, much like Insecure before it, Rap Sh!t feels its strongest when it’s functioning as a story about the strained, complicated relationship between two very different Black women. It’s here where Rae uses that producer’s harmful comment for good, repurposing it as fuel for the dominant tension that exists between Shawna and Mia’s approach to rap music. At one end of the spectrum, there’s Shawna, a once-promising rapper whose relentless desire to make “conscious” music got her dropped by her former producer (Jaboukie Young-White) and has prevented her from connecting with an online audience looking for something more fun. Then, there’s Mia, representing the other end. A talented makeup artist with a sizable social media following, Mia extols the virtues of knowing your worth, having fun, and getting men to pay for your lifestyle. Though she’s an inexperienced rapper, her ability to transform her carefree Instagram persona into quotable bars makes her an instantly formidable partner for Shawna.

“This odd couple pairing, it always works so well. It's fun,” says series showrunner Syreeta Singleton about the push-pull dynamic between her two leads. “It represents these two different ideas of what feminism even is, and what it looks like in execution.” (Singleton, who graduated from a writers’ assistant to a script coordinator to an executive story editor during Insecure’s run, was handpicked by Rae to step up as Rap Shit’s showrunner. Though she eventually grew to love the role, Singleton still describes the position as being “a lot bigger than what I realized.”)

While Mia’s growth throughout the show is inspiring to witness (the moment when she lays down a verse for the group’s second hit is a clear season highlight), Shawna’s is the most telling, the one that seems to crystallize the show’s thesis about who gets to control who, what, and where. Shawna never loses sight of herself — even on her new club anthems, she’s still using twisty wordplay and talking about class inequality (albeit, now in a cheekier manner) — but she ultimately evolves into a freer, more confident version of the person we meet in the pilot. She taps into her sensuality and her sexuality; when she leaves her long-distance boyfriend, whose masculinity is clearly threatened by her newfound confidence, you want to stand up and applaud. Even when she threatens to regress to old habits in the season’s back-half, there’s still a noticeable shift in the way she carries herself. As Singleton puts it, “Shawna's a hard role. She keeps changing. She's one person and then she's another person, and then, she’s another.” But none of this is meant as a knock to Mia’s own complexity. Right after that, Singleton adds, “Mia has layers to her as well. There are all these different things driving and motivating her. Our women just go through some stuff. They go through some very complicated turns.”

The layered motivations of both characters help to keep the story engaging, with each woman trying to meet the other in the middle. This dynamic is seen most clearly during an early conversation, when the pair debate whether Lil’ Kim should be viewed as a sex-positive force in her own right or whether she was just an object, crafted by Biggie to appeal to other men. That both parties are able to bring up valid points in support of their respective arguments isn’t coincidental. “We had a spectrum of ages and generations, but it was predominantly Black women in the [writers’] room,” Rae tells me, proudly explaining how these nuanced on-screen conversations extended from similar ones she had already been having with other Black women in real life. “Obviously, nobody's the same, so we all had these different POVs.”

The importance of including different points-of-view in the writers’ room extended to other essential elements as well. Since Rae and Singleton both hail from Los Angeles, they knew early on that they’d need outside voices to help ensure that the show’s depiction of Miami felt true-to-life. After all, Insecure was praised as much for its writing, performances, and direction as it was for its clear reverence for the city it was set in — what would it mean if Rap Sh!t, a show specifically about Miami rap, didn’t do the same? “We wanted to make it authentic,” Rae says. “There’s nothing worse than being an L.A. native and feeling the disrespect of people not really knowing a certain part [of your city] or trying to pass off one place as another.”

So, in an effort to not “disrespect the locale,” Rae and Singleton went straight to the source, recruiting Miami natives like The Read’s Kid Fury to help write episodes and hiring local consultants, like actor-director Edson Jean, to aid with dialogue. Some of the actors contributed to the cause as well: Daniel Augustin, a Haitian Miami native who plays Shawna’s coworker-cum-love interest Maurice, often chimed in about some of the Creole dialect. “I couldn't have written that,” Singleton says about some of the more regionally-specific slang. “So we gave our actors the freedom to play, to basically say, ‘This is my experience, and this is how I would say this.’” (Without them, I may have never learned that the h in ‘conch’ is silent.)

But of course, authenticity in a music show would be pointless without good music — and according to both Rae and Singleton, ensuring that the songs were actual bops had always been top of mind. “We felt so much pressure to find good music,” says Singleton, explaining how she and Rae were just as meticulous in curating their songwriting camps as they were when staffing their writers’ room. In the end, they sought out musicians like Dreezy to pen Shawna’s socially-conscious bars while reaching out to pineappleCITI and A.Chic for Mia’s specific brand of sexy braggadocio.

Like everything for this project, all details were considered. The team relished opportunities to make sly callbacks to other pivotal moments for female rap stars. It’s why, Rae shares, Shawna and Mia’s initial car freestyle, in the pilot, was inspired by the viral “For The Dick” challenge. (Scroll far enough down Rae’s Twitter timeline and you’ll find her taking a stab at the challenge herself, alongside a Girls Trip-era Regina Hall, no less.) It’s also why the season’s two key songs, breakout hit “Seduce & Scheme” and its hard-hitting followup “Nann Badder,” are both built around prominent samples from Florida-based rapstresses (Khia’s classic “K-Wang” for the former; Trina and Trick Daddy’s perennial party-starter “Nann N*gga” for the latter).

“I just wanted to make music that you would want to bump [in real life], that I would want to bump,” explains Rae of her approach. “Sometimes, when there’s music from a group in a show, [the music] feels very ‘TV.’ I wanted [this music] to feel like it could live in the outside world.” And with fierce, radio-ready production by Miami legend Danja, these songs are primed to do just that.

Rap Sh!t wrapped its first season up last week, but so far, the freshman comedy has yet to be renewed for a second. When considering all the drama currently surrounding the recent Warner-Discovery merger, it’s hard not to fear for the future of one of HBO Max’s less flashy titles. But robbing this gem of more storytime would, ultimately, be a major disservice. In the season finale, Shawna and Mia come back together after a brief spat, now more dedicated than ever to work side-by-side as equals as they prepare for a cross-country tour alongside the Iggy Azalea-like appropriative rapper Reina Reign (The Deuce’s Kat Cunning). The celebratory vibes are short-lived, though, when Shawna is taken into police custody — right before their big break.

Can Shawna make it out in time for the tour? Will Mia be thrown by the news of Shawna’s secret credit card fraud schemes? And who’s going to finally tell Reina Reign that she’s a white woman?

Let’s hope we get to find out.

Rap Shit is available to watch on HBO Max now.