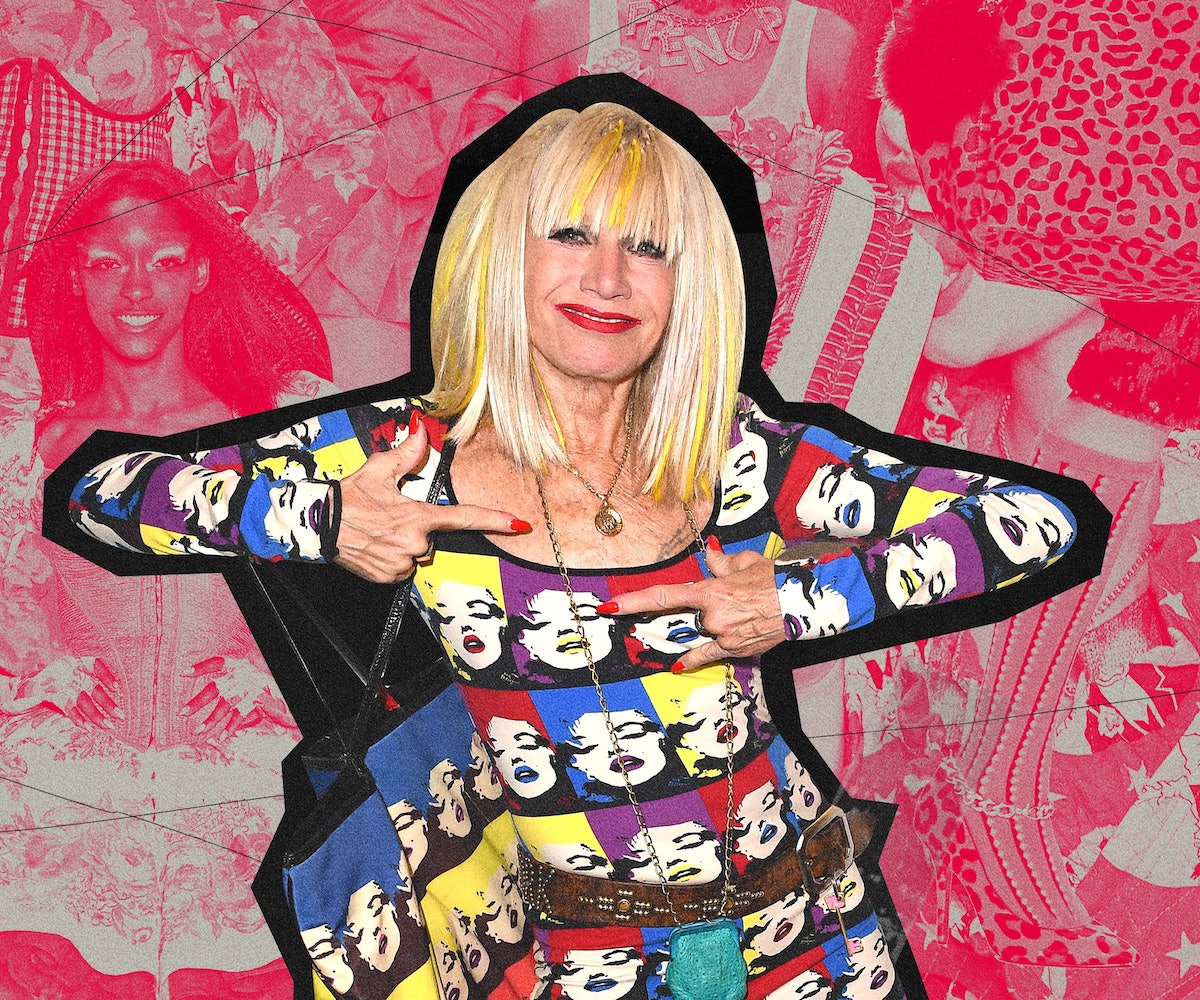 Y2K fashion is no longer a trend, but rather a movement. In just the past couple of years, some of the era’s most polarizing and kitschy designers have made staggering comebacks, from Ed Hardy to Von Dutch. And now, arguably the most important designer to your inner child has returned: Betsey Johnson — and she’s back with a vengeance.

This year marks the Connecticut-born designer’s 80th year doing cartwheels around the sun and her namesake brand celebrated with a very-Betsey collection launch that feels on-brand to her growing relevance among a new generation of fashion fans. The designer’s slow but steady grand reentrance follows the recent launch of Betsey Johnson’s beauty line, throwing OG Betsey fans into a time machine as if the designer never left.

In 2022, the list of relevant influential “It” girls wearing vintage Betsey Johnson continues to grow: Addison Rae wore a 2013-era slip to the People’s Choice Awards in 2021, while Bella Hadid and Madison Beer have both been spotted with the same New York-inspired handbag. Vanessa Hudgens, Amelia Hamlin, and even Britney Spears are also on the list.

It’s evident that the designer’s angsty but wholesome aesthetic has once again resonated with the youth for Betsey’s perennial playful spirit even 44 years after her namesake label’s founding in 1978. “I love that people are rediscovering my brand. These are clothes that I love, live, breathe, and fully wear on a daily basis, so it’s exciting to see how everyone at any age can wear the brand,” Johnson tells NYLON.

Most notable of Johnson’s new-wave followers is none other than NYLON cover star Olivia Rodrigo. Since launching onto the scene with her single “Driver’s License” in January 2021, the breakout star has been snapped by paps in archival looks, as well as new Betsey Johnson garments time, time, and time again. The pop-punk princess of cool is currently a leading influence in determining what’s hot and what’s not among her Gen-Z-strong fandom.

According to fashion resale platform Poshmark, searches for Betsey Johnson pieces jumped 44% after Olivia Rodrigo wore custom Betsey Johnson x Jennifer Behr butterfly hair clips to the 2022 Met Gala compared to May 2021. She also wore archival BJ to her Sour Prom premiere, onstage throughout her Sour tour, in her “Brutal” music video, on the cover of Clash magazine, and more. And her influence has quantifiable proof: “Searches for Betsey Johnson peaked in early July when the brand saw its most dramatic spike,” a spokesperson from Depop tells NYLON, which coincides with the conclusion of Rodrigo’s Sour tour on July 7. The marketplace app has also seen an 80% increase in Betsey Johnson searches from the end of 2021 through April.

While the 19-year-old pop star has taken a liking to other archival designers, like vintage Vivienne Westwood, Chanel, and Roberto Cavalli, Rodrigo’s constant rotation of vintage Betsey has left many ’90s and early-2000s fashion fans wondering: Is the teen obsessed with thrifting like her 2000s-born counterparts? Or has the Betsey Johnson brand schemed its appeal for the new generation with the clever use of Rodrigo as a pawn?

“Olivia is a rebel, but always has a hint of glamour, which is the essential Betsey girl,” Johnson tells NYLON. “She is definitely the poster child of the brand.”

The Sour tour’s theme was eerily reminiscent of an early-aughts middle school dance, as some special concerts were prom-themed — an intricately designed scene of a junior high gymnasium on dance night, corsages and all. And it’s safe to assume this aesthetic was purposeful with Rodrigo’s millennial stylists Chloe and Chenelle Delgadillo. Vintage Betsey Johnson frocks comprised the singer’s best wardrobe, alongside established labels such as Area and Alessandra Rich, mixed in with buzzy internet brands like Lauren Perrin and Saint Sintra.

In the late ’90s and early 2000s, just hearing the name Betsey Johnson ensues a flurry of memories and emotions. The designer’s heyday unfolded during formidable times in a young and individuality-seeking woman’s life just beginning to seek and express personal identity through clothing. Aspirational “It” girls from the time, such as Miley Cyrus, Vanessa Hudgens, and Selena Gomez, were sporting Betsey frocks all over the Disney channel. Once our childhood idols were wearing tulle tiers and sequined skirts, we went rabid for the flashy brand. Johnson’s unwavering youthful taste and strong-girl spirit imprinted on impressionable preteens for decades now and continue to today.

For Betsey Johnson fans who grew up idolizing her kitschy garments and carefree attitude, seeing Rodrigo sport the pieces we once coveted only solidifies her cool-girl status, not just to her own peers, but also to the generation before her on a cerebral, psychoanalytical level. And now, millennials have the spending power to tap into their inner child and welcome Ms. Johnson back into their lives (and closets).

Currently, Johnson’s frocks are a touch more approachable in the forms of pared-back slips and floral sundresses — still extremely loud and colorful in true Betsey fashion, of course. Her iconic designs can still be found on secondhand sites, like Depop or Poshmark, but if you’re not looking to pay resale, the newly-launched Birthday Collection refreshingly epitomizes the brand’s DNA.

“As I reflected on all of my many years in this industry and corresponding collections, I wanted to pull inspiration from my most favorite, classic Betsey Johnson styles, silhouettes, and prints,” says Johnson. “This revival collection features my absolute favorite prints from my entire archive — the newly enlarged spider print, my tattoo print in collaboration with Marc Mahoney, and the tin can rose but reimagined for the modern Betsey woman.”

When asked who the new collection was meant for, OG fans or newcomers, the designer says “the Betsey Johnson customer is from 15 to 50 at least — even up to 80 and beyond!” For Johnson, the landmark collection is a moment she’ll never forget, right up there with “hanging out with Edie Sedgwick and designing costumes for Andy Warhol’s movies” and “opening up my 72 retail stores and being involved in the entire process from top to bottom.”

Johnson celebrated her milestone birthday and a new collection last week, surrounded by die-hard fans, family, co-workers, and even a new beau. “I went to the grocery store in a bright orange coat looking at grapes. This man said something really funny to me about the coat and we’ve been together since then. It was like boom!” Johnson dishes about her meet-cute.

“I never give up on love. That was one of the biggest surprises of my life that [at] nearly 80 years old I would meet someone in the grocery store,” she adds. “I love him dearly. It’s never too late, just keep on living and try to be healthy.” Considering the legend is as spunky, energized, and relevant as ever, her advice is worth taking to heart.