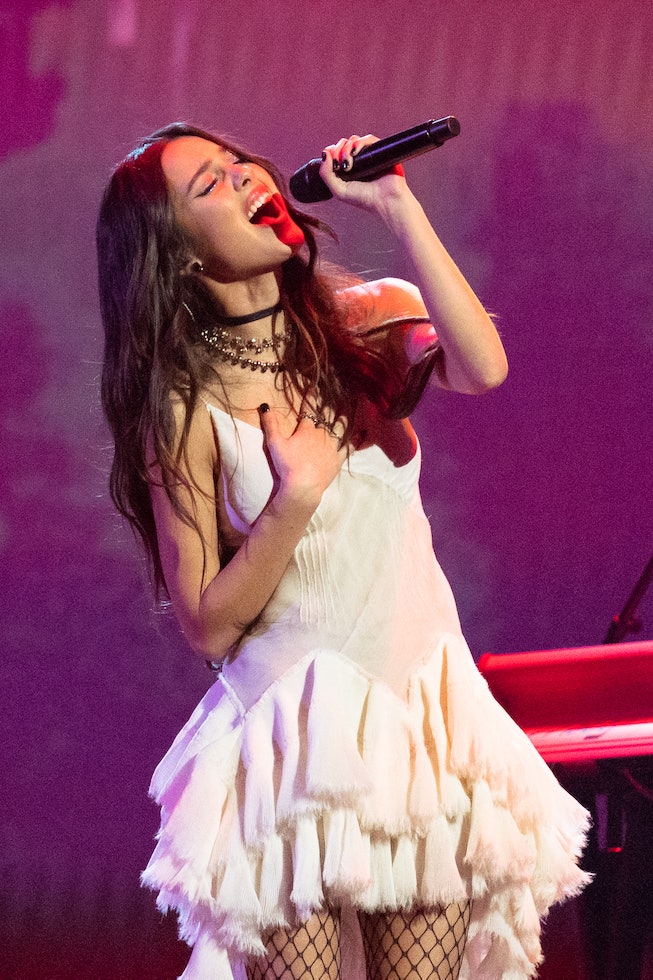 Olivia Rodrigo has experienced quite a lot of big moments. In a span of over a year, the 19-year-old pop sensation already has a slew of chart-topping singles, and just days after winning three Grammy awards, the NYLON cover star has officially started her first-ever world tour.

With Rodrigo’s Sour tour officially underway, attending her debut concert might also be a bit daunting for her beloved “Livies,” as it’s likely been a minute since we’ve last attended one IRL. But there is a lot more outfit inspiration to choose from than you may think, and it’s coming from none other than the pop-punk princess herself. Through a number of #OOTD posts, street-style photo opps, and on-stage appearances over the past year alone, Rodrigo has been captured rocking many aesthetics. Aside from her usual pop-punk look or her Y2K-inspired ‘fits, she’s also been seen wearing tulle “balletcore” dresses, “goth barbie” red carpet ensembles, and much more.

If you’re struggling to pick out what to wear the night Olivia Rodrigo swings by your town, look no further. Check out seven outfit ideas we’ve compiled to wear to her first-ever Sour tour, inspired by her own wardrobe, ahead.

Ah, the Y2K revival is officially here and we don’t see the trend leaving our feeds anytime soon. Though Rodrigo was born about halfway through peak 2000s fashion, she seems to be loving the throwback aesthetic as if she were there herself. There are many looks and vibes to choose from when talking about the early aughts, but one thing we noticed from Rodrigo is that she loves a good itty, bitty mini skirt, especially from Heaven by Marc Jacobs. Keep it simple by opting for a fun graphic tee and if you’re able to stop by the merch booth beforehand, get your hands on her very own Sour trucker hat and flip phone-inspired phone case.

Maybe you’re looking to go a little above and beyond at Rodrigo’s first-ever tour and we don’t blame you! There are definitely other ways to stand out amongst the crowd in a sour, but oh-so sweet, kind of way. Perhaps we can introduce you to the frills and tulle of balletcore? The romantic aesthetic has also been co-signed by Rodrigo in her “Brutal” music video. Keep it cute by rocking a mini tulle dress or midi skirt, which can be paired with platform ballet pumps or Mary Janes. Dainty accessories and arm warmers also make great pieces to complete your concert ‘fit and bonus points if you can cop some cool fishnets like Olivia, too!

In the course of a year since the rise of her singing career, we’ve never seen the pop singer in a pair of boots that were not platform! True “Livies” know that Rodrigo is a huge fan of platform boots and she’s been seen rocking a couple of her favorite go-to brands, including Dr. Martens and Naked Wolfe. Perhaps you want to switch up your shoe game and get a fresh pair of boots before the concert and in that case, we have a few totally-not-boring suggestions, coming in heart-shaped buckles to floral embroidery and more.

Sweaters make for the perfect trans-seasonal outfit, as springtime can sometimes be a bit unreliable in terms of weather. But lucky for you, Olivia is also a huge fan of chunky sweaters, coming in all sorts of vibrant patterns and knits. We have our eyes on some colorful tops, ranging from rainbow patchwork, multicolor mohair, and pastel crochet.

It wouldn’t be an Olivia Rodrigo outfit idea roundup without the mention of her famed pop-punk aesthetic, as the 19-year-old has been spotted countless times sporting pieces, like corsets and baggy bottoms to kitschy jewelry and more. Though you might already be well-ahead on the 2000s-inspired trend, maybe you’re looking to spice up your concert ‘fit with a new charm bracelet similarly seen on the “spicy Pisces” herself, or her new favorite bustier top that she wore at the 2022 Grammys.

Plaid is one of those prints that can never truly go out of style and it seems that Rodrigo knows that to be true, too. Fortunately, the punk-leaning pattern goes well with just about anything, so it doesn’t hurt to swap out your usual denim bottoms with plaid pants or a pleated tennis skirt. You can even opt to exude Olivia’s past #OOTDs with a printed mini dress and platform boots.

Olivia Rodrigo’s goth barbie look is the newest vibe we’ve gotten from the pop star. After sweeping the Grammys in a ‘90s-inspired black Vivienne Westwood gown, perhaps you’re searching to channel Rodrigo’s red carpet ensemble with a form-fitting black dress, which can easily be worn with a crystal-adorned choker and some platform booties. You can also experiment with your concert look with fishnets and even a pair of silk opera gloves.