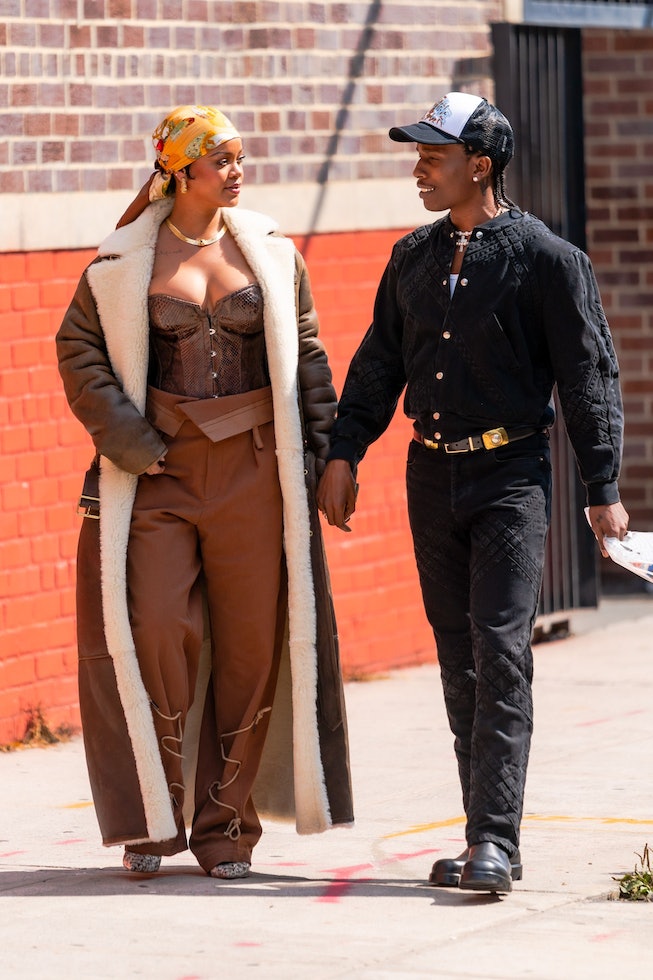 It’s the summer of celebrity couples this year and Rihanna and A$AP Rocky are leading the charge. The two music and fashion moguls, who went from flirty friends in 2012 to publicly official duo in 2021, have been spotted all over New York City recently. Over the weekend, they were seen on set filming a music video and their outfits were definitely not fit for the humid summer weather. Instead, we’re taking inspiration from their layered looks for our fall aesthetic.

Rihanna, styled by her longtime creative director Jahleel Weaver, wore a floor-length shearling coat with a corset top (vintage Dolce & Gabbana from Spring 2005) and baggy brown pants. For accessories, she wore a printed silk headscarf, gold jewelry, and a pair of pointed heels. As for Rocky, he wore a black textured jacket with matching jeans, combat boots, and a trendy trucker hat, further proving that the early-2000s accessory is back in style again.

Ahead, check out of the rest of our favorite celebrity looks, including Naomi Osaka in Louis Vuitton, Kaia Gerber's denim jumpsuit, and more.

Doja Cat performed in Miami to celebrate the release of her new album Planet Her. She wore a cut-out look and blue bag from Brooklyn-based label Marshall Columbia.

Megan Fox and Machine Gun Kelly’s couple fashion moments are still in action. The two attended the grand opening of Delilah at Wynn Las Vegas and Fox wore a nude corset dress and silver chain necklace. Meanwhile, MGK opted for an all-black ensemble with a sequined jacket and pearl necklace.

Alexa Chung got in on the Wimbledon action over the weekend. For the sporting event, she took inspiration from ‘90s-era girl bands and wore a sequined top, camel trousers, and a matching cable-knit sweater.

Beyoncé is officially the proud owner of a Bushwick Birkin. She posted on the ‘gram toting a white Telfar Shopping Bag (in size medium), along with a white tied-up blouse and floral Christopher John Rogers pants.

Kaia Gerber was spotted out to dinner in West Hollywood wearing the easiest summer ‘fit: a denim jumpsuit from Sézane. She added a pastel green baguette bag, black combat boots, and cat-eye sunglasses to her look.

Jodie Turner-Smith is making the rounds at the 2021 Cannes Film Festival and her off-duty looks are just as good as her red carpet style. At the Nice airpot, she wore a green matching set from Alberta Ferretti, white loafers, and Gucci’s latest Diana bag.

For the premiere of her new HBO Max show White Lotus in Los Angeles, Sydney Sweeney wore a Spring 2021 look from Prada with black pumps and a matching logo hair clip.

Rihanna served a ton of Very Good Looks over the past week, but this more casual ‘fit is our favorite. She wore a Prada bucket hat in mint green, which she matched with her sunglasses and more green-colored pieces, like her Cramps band tee, belt, and Briony Raymond necklace. She finished her casual outfit with blue jeans and white heels.

Hailey Bieber mastered one of the many ways to style of Nike Dunks: suiting. She paired her black-and-white sneakers with an oversized pastel yellow suit from Magda Butrym and layered it over a knitted bra (another warm-weather trend we love). For jewelry, Bieber wore a necklace, earrings, and bracelet from Monica Vinader and topped off her look with Saint Laurent sunnies.