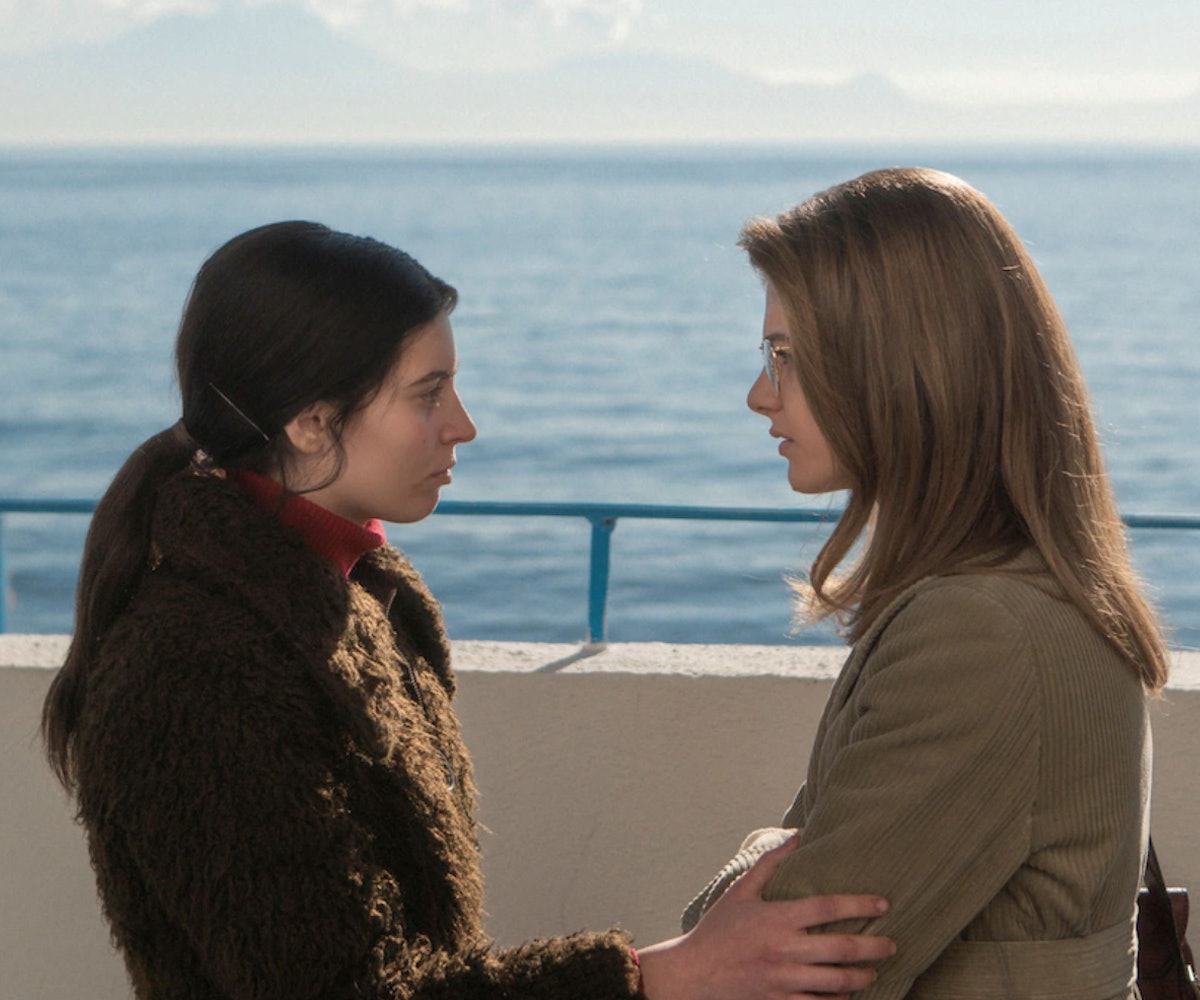 Over the four books of Elena Ferrante’s My Brilliant Friend series, and on the ongoing TV adaptation from HBO, two women traverse life under patriarchy, from a childhood in post-WWII Naples into a fast-modernizing new millennium. Born just weeks apart in the month of August, Lenù and Lila couldn’t be more different: Lenù applies her Virgo work ethic to change her circumstances and escape poverty, doubting herself every step along the way. Lila, the Leo, is an elemental force within their incestuous neighborhood, sometimes acting as its ruler, and other times as its sacrifice.

Where the series last left off, Lenù had essentially made her dreams come true, scoring a well-to-do man and even getting her novel published — premium fodder for Virgo-style self-destruction. Lila, meanwhile, has fully given up her god-given Leo talents, an outcast now working at a salami factory.

As HBO unfurls the third season in the saga, based on book three, Those Who Leave and Those Who Stay, the friends will continue their march towards destiny, as led by the stars. But how do the other great figures of the neighborhood match up to the characteristics of the star signs?

And, if you had to make it Napoli, who would be your match, based on your astrology? Do you claim to be a Pasquale, but act like a Nino? Consult your stars, and speak the truth: The Stradone never forgives!

The warrior ram craves conquest, domination and victory — leave the subtle emotional cues for Pisces. Stefano campaigns hard to win the neighborhood’s most untouchable prize, Lila, and sinks a fortune into the project along the way. But it’s not enough to score, and by the time Stefano’s secured his bride, he’s already lost her. For all its valor, Aries lacks the empathic intelligence to play life’s complicated games. Like his father, the aptly named Don Achille, Stefano believes that violence is always the answer. Ultimately, it loses him everything.

“So you think you’re somebody because you wrote a book, and you’re marrying a professor,” Lenù’s mother asks, or really, states. “But you came out of this belly.” As always, there’s no arguing with mamma. Ruled by Venus, Taurus governs fertility, and inevitably answers to a higher authority. Immacolata’s classic bullheadedness often damages her chance to really know her daughter. But for all its stubbornness, Taurus values integrity more than anything. Lenù goes far beyond the neighborhood because her family supports her. If Lila had had the same backbone in her own home, how different would her life have been?

Ruled by the messenger god Mercury, Gemini often acts as the voice, medium, or intermediary. They’re not necessarily the greatest strategists, but they meet the moment better than anyone. Appreciating Lila’s gifts long before anyone else, Rino acts as her champion, and together brings her artistry to light. But in acting as the go-between for the Cerullos, Carraccis, and Solaras, Rino loses his place, and complicates his loyalty. Without Lila, or Pinuccia, directing him, he’s a voice without a cause. Geminis need a direction, or else they’ll spin out into space.

Cancers often earn their reputation for manic codependency and grudge-keeping, but when it comes to love and loyalty, they’ll be with you until the end. If only every neighborhood had a hot boy at the fruit-stand like Enzo, who steps up to the plate and loves Lila at her lowest, demanding nothing in return. Cancer will wait, often endlessly, for love to be reciprocated, and Lila takes years to thaw. But by nourishing Lila, Enzo brings her back to life, and the payoff is certainly worth it.

Burning with the inexhaustible light of the sun, Leos inspire — and intimidate — all who come in their circle. Everyone wants a piece of this sign, which Leo can entertain on a grand stage, all while keeping a very private circle. When Lila is at her most powerful, running Stefano’s salumeria, she demonstrates the lion’s magnanimity, providing for the women of the neighborhood without question. But Leo is myopic — the world is only as big as their ego perception — which binds Lila to the neighborhood forever. Though she is a multivalent, infinite talent, she lacks the acumen, strategy, and skill to give form to her gifts. In My Brilliant Friend, Lila reigns supreme — but only over a small kingdom.

The wheels are always spinning for Virgo, a sign consumed with rigorous, neurotic self-definition. Lila may be a font of creative genius, but she lacks the process to achieve her potential. Meanwhile, Lenù can go a hundred rounds, working herself tirelessly and executing an unseen success story out of the neighborhood. But Virgo’s standards of perfection, projected onto the incandescent Lila, ensure that Lenù will never enjoy the fruits of her labor, or see her own talents as anything but forced. “Had I made it?” Lenù asks on the eve of graduating university. “Almost. Had I torn myself away from the neighborhood? Almost. Did I have new friends…? Almost. Behind the ‘almost’ I seemed to see how things stood.” Girl, give yourself a break.

If Michele is the brains of the Solara operation, Marcello is the face. The sign of beauty doesn’t need to go deep to make a grand statement. Flaunting the family wealth ever so easily, Marcello inspires fear in the neighborhood, reminding all others that if Naples has a hierarchy, the Solaras rule from the top. Libra understands love to be a currency, which is why Marcello launches the explosive bidding war for Lila’s hand in marriage. For many reasons, that match would never have worked. Lila finds truth in ugliness, in rooting out the floorboards and revealing the horrors beneath. But Libra just wants a nice watch and a fancy car. Why all the drama?

The archetype of the madwoman haunts nearly all of Ferrante’s work, a specter of patriarchal violation who becomes immortal in her defiance. Melina, loved and jettisoned by Donato Sarratore, gleefully embraces madness in his wake, becoming a living Lilith, a screeching fury who refuses to be silenced. Enter the Scorpionic underworld, where the love, lies, and abuse we swept under the rug rise to terrorize us. Melina testifies to the real truth of the neighborhood, and womanhood, of the savagery and cruelty which Lila and Lenù know is always around them. Peer through the madness with Scorpio, and you may attain immortality.

What’s Pasquale on about this time? When he’s not laying bricks, Pasquale is always looking for a fight, be it against the Solaras or the fascists. Sagittarius needs a wall to break through, a stagnant hierarchy to smash, a new order to launch. An eternal revolutionary, Pasquale helps Lila in her education of politics, corruption, and bureaucracy, embodying the centaur’s gifts for imparting knowledge. Though Lila and Lenù shift in and out of political fascination and disenchantment, Pasquale embodies his sign’s eternal fervor, never dropping the torch for change.

When he says he’s nothing like his father, are you really going to believe him? Defining himself in contrast to his reptile of a father, the lothario Donato, Nino can’t reckon with his own abuses of power. The sign of the patriarch, Capricorn must deal with their own internalized hierarchies: Will you embrace your authority, or play the role of twee outsider? Either way, Capricorn is ruled by desire and ambition; meekness is always an illusion. By the end of the saga, the facade has melted, and father and son are revealed to be the same breed of demon. Think twice before you book your next Ischia trip.

Leo’s raw star power finds its counter in Aquarius, a sign with the structural vision to best cultivate (or exploit) talent. Lila, the archetypal Leo, surges with creativity and passion, but can’t wrangle her gifts. “I open the pail and the words pour out,” she says to Lenù, in elementary school. Only Michele understands the full possibilities of her power, and the many ways to profitably implement them. But Aquarius often thinks too big, obsessing over ideals and losing sight of human empathy. Though Michele may be Lila’s only true match, his machiavellian coldness keeps them from creating something perfect together.

Awash in creative fluidity, Pisceans need strict boundaries, lest they lose themselves completely to their relationships. Spending time in the presence of Lila’s solar individuality warps Alfonso’s self-conception, causing him to shift his gender and appearance to be like her. Alfonso’s intelligence and style speak to Pisces’ hyper-adaptive talents, but his lack of defined selfhood is the beginning of his undoing. Without space and silence from the booming personalities around them, Pisceans don’t have a chance of catching their breath. How do you collect yourself in the Neighborhood?