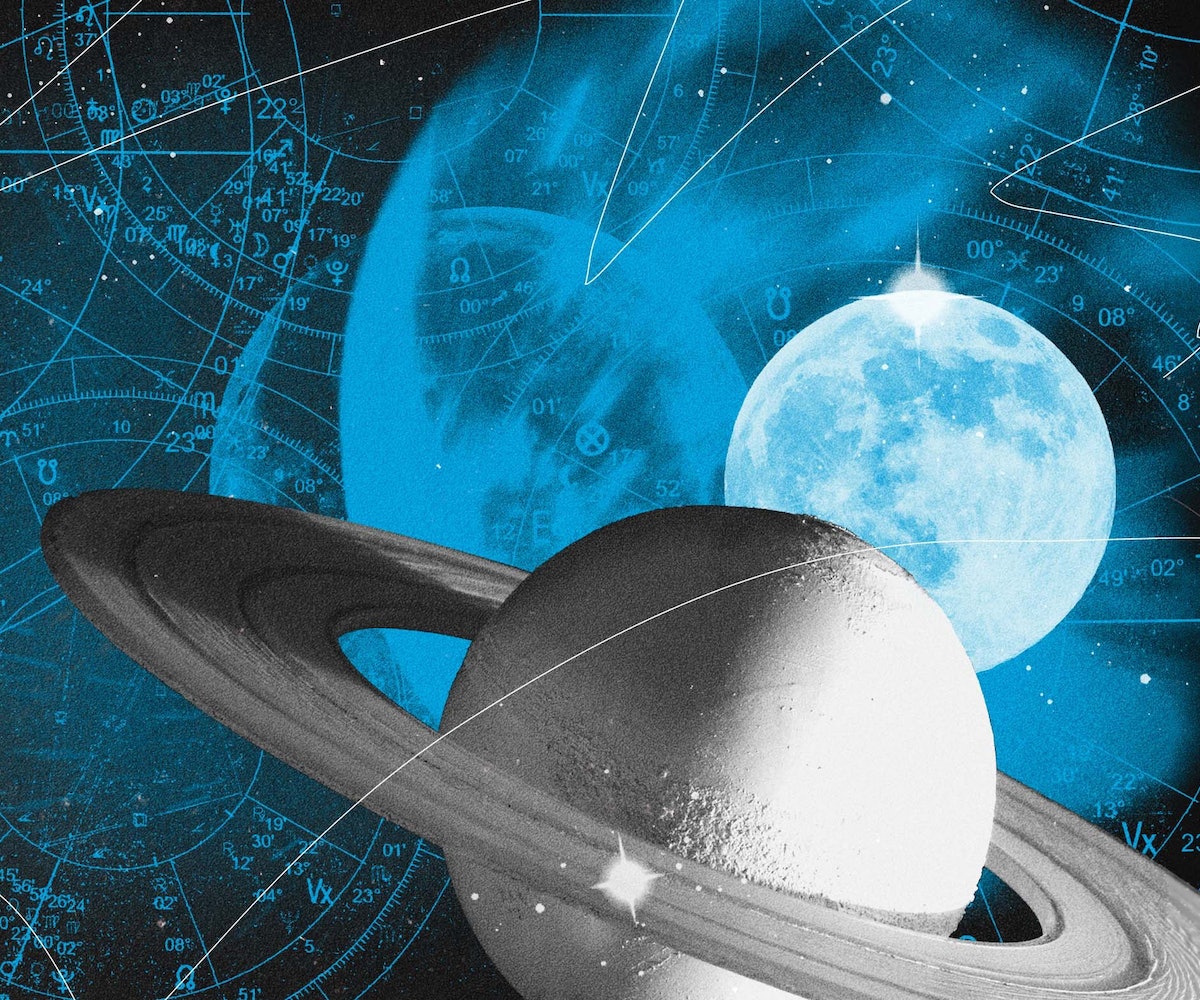 Astrologically speaking, 2022 was no amateur showcase, with the first-ever U.S.A. Pluto Return; a batsh*t Taurus-Scorpio eclipse cycle; and a chaotic, election-season Mars retrograde in Gemini. So what comes now? That 2023 will be easy is not likely, but that it will feel new is certain. With major planets like Saturn and Pluto shifting into new signs for the first time in years, we can kiss goodbye to the cynicism of the past decade and enter outright into the awakenings, crises, and evolutions of the 2020s. What will the retrogrades, eclipses, and epic transits of 2023 bring for the world, and for you? Here are some of the key dates and major planetary players to watch out for.

Jupiter acts like a roving cosmic spotlight, illuminating and elevating whichever sign it’s in. The planet of synthesis, wisdom, and expansion takes just over a decade to cruise through the zodiac, giving each sign a year to shine. From December 21, 2022 until May 16, 2023, Jupiter is in Aries, where it rolled for a few months in the summer of 2022. If these past few years have made you feel buried, subsumed, or skeptical, you better believe that the time for new beginnings is now. In the sign of individuality, courage, and renewal, Jupiter calls for new voices to rise — and to overthrow the old gatekeepers. Spend the spring developing, creating, and connecting, and be ready to fight for your point of view.

In May, Jupiter will then launch a year-long, uninterrupted residency in Taurus, for the first time since 2012. All that’s been cooking in the studio will be released, rewarded, and enjoyed in the sign of fertility and embodiment. The new hedonism of the 2020s will emerge during this time, as society whips out of the moralistic trappings of the last few years. And in the sign of earning and worth, Jupiter will escalate the dialogue around money. Jupiter’s last tour of Taurus set off Occupy protests around the world. Consider the unionization renaissance at UberEats, Starbucks, Amazon to be just the beginning. While some fight for what they deserve, others will stretch their entitlement past breaking. See where you’re lacking and go get yours.

Saturn in Pisces & Pluto in Aquarius

For insight into the day-to-day, look to the inner planets — the moon, Mercury, Venus, Mars — which orbit closer to the sun, and move at a faster clip. But for the changes which define eras, it’s the slower-moving planets that reveal all: namely Saturn, Uranus, Neptune, and Pluto. In 2023, two of these planets move signs, shifting the sensibilities of the collective consciousness.

First comes Saturn, the planet of structure, order and responsibility, navigating the choppy waters of Pisces from March 7 through 2026. Since 2020, Saturn has been in Aquarius, hashing out the ethical evolution (and regression) of public health, education, gender recognition, racial representation, and beyond. In Aquarius, Saturn built a new transmission; when Saturn enters Pisces, it changes frequency. From opioids to streaming platforms, all currents used to numb and control will undergo revolution. We will find ways to declare our rights and boundaries so as not to sink in a whirlpool of corporatized data. We will close out the cannibalistic nostalgia of the last thirty-year Saturn cycle, and become ready to imagine new archetypes.

Just weeks after Saturn enters Pisces, the great karmic destroyer Pluto shifts into Aquarius, for the first time since the 18th century. Since 2008, Pluto has been in Capricorn, annihilating our illusions and delusions about power. From March 23 through June 11, Pluto will station at 0 degrees Aquarius, before taking a final dip back into Capricorn for the rest of the year, and returning to Aquarius in 2024. Consider this an opening salvo of the next few decades, in which we’ll encounter the dominant technologies and mediums of the new century, foment collective uprisings that will reshape the globe, and access the dawn of post-humanism. Whether we’re in for Arrival or Independence Day, 2023 begins the next phase of the Age of Aquarius.

Though both Saturn and Pluto’s movements will be felt globally, you can count on personal reckoning as well. The narratives of the last decade — helplessness in the face of generational change; dizzying leaps in technological evolution; extreme adoptions of either irony or earnestness; malaise over the future of the world — will be wrapping up very soon. So should those tired old stories about yourself, your history, and your potential. Only those artists, heroes and visionaries who can look forward and affirm a new point of view will survive the flood. We’re counting on you.

OK, let’s just get it out: The Taurus-Scorpio eclipse saga, which has raged since late 2021, is not yet over. Count on two lunar eclipses — in Scorpio on May 5 and in Taurus on October 28 — to bring this fixed sign firestorm to a close. 2022’s eclipses coincided with the Heard-Depp and Weinstein trials, the Elon Musk buyout of Twitter, and a wave of embattled global elections. Count on these last two to further escalate crises of power on the global stage — and clear the way for a powerful rebirth in the personal domain.

But 2023 also introduces Aries and Libra into the eclipse sideshow, with a hybrid solar-lunar eclipse in Aries on April 20 and a solar eclipse in Libra on October 14. On July 18, the lunar nodes enter Aries and Libra, where they’ll work until early 2025. With the south node in Libra, the sign of social engagement, we’re invited to release and reinvent our relationships with institutions, hierarchies, and scenes. The north node in Aries inspires individual action and invention in a reinvented social order. Of course, Aries and Libra represent the pendulum between outrageous self-aggrandizement and crushing insecurity, selfless leadership and ruthless social climbing, heroism and autocracy. Several of the world’s rulers — including the Libra Vladimir Putin — will overreach to prove their power. Each of us will confront the blind spots which isolate and pamper us, through which we’ll emerge into a more fair, just, balanced world together.

Since Halloween 2022, Mars has been retrograding in Gemini, and goes direct on January 12. Expect renewed clarity, singular vision and direction once this lagging age of ambivalence finally wraps up. Meanwhile, the year begins with Mercury retrograding in Capricorn, going direct January 18. All of 2023’s Mercury retrogrades will be in earth signs: Taurus (April 21–May 14), Virgo (August 23–September 14), and then a Capricorn-Sagittarius hybrid starting December 13. Matters of money, industry, physical output, limits, logistics, and surroundings will all be hit by this. Once they’re done, you’ll have a stronger foothold in how you earn, support yourself and stake your claim in the world. But you’ll have to clear out the inconsistencies first…and grow up a little.

The major retrograde of 2023 is Venus’s backwards dip in Leo, from July 22 through September 3. In the sign of affirmation, leadership, and talent, Venus will likely reveal the hollow forms of identity we’ve constructed in a media landscape of instant gratification and virtue signaling. You’ll have to command a more authentic public presentation, while working to establish real accountability in your intimate relationships. On a global stage, look for shake-ups in Hollywood. Much has been said these past years about the “decline of the movie star” in an age of intellectual property cannibalism. Until Venus has her say, it ain’t over ‘til it’s over.

As with 2022, 2023 will be one to remember for girls with ascendants or prominent planets in the fixed signs (Taurus, Leo, Scorpio, and Aquarius). With two Taurus-Scorpio eclipses, Pluto entering Aquarius, and Jupiter hitting Taurus in the summer, you can count on the intensity to continue. But this year, the thematic resonance shifts from destruction to reinvention. You’ve experienced profound loss, and have been forced to release everything. Face this cycle like it’s the Shimmer in Annihilation: “not destroying. It’s making something new.”

As for the cardinal girls (Aries, Cancer, Libra and Capricorn), expect a surge of drive and direction with Jupiter’s tour of Aries through mid-May and the all-new Aries-Libra eclipse cycle. Look out for a fated, Sliding Doors effect in the realms of self-definition, direction, and relationships. Beginnings, endings, and chances abound: Pay attention and laminate them all.

As for the mutables (Gemini, Virgo, Sagittarius and Pisces), Saturn’s launch into Pisces will give you plenty to work with in terms of stabilizing and stratifying those domains in life which are most important to you. This is a great time to commit, build, and strip away the unnecessary. Anyone born with Saturn in a mutable sign will enter into either a return, opposition or square. Consult our Saturn and Saturn Return guides for advice on facing these cosmic gauntlets head-on.

NEXT UP
Astrology
How to Use Astrology to Access Past Lives
Astrology
February 2023’s Full Snow Moon in Leo Embraces The Real You
Astrology
Your February 2023 Horoscope Is A Breath Of Fresh Air
Culture
An Ode To Stripperweb, The Beloved Sex Worker Forum
Style + Culture, delivered straight to your inbox.