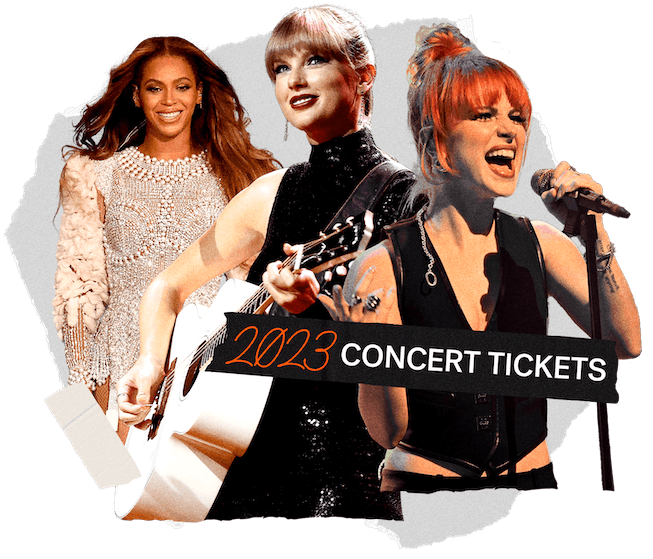 Next year is shaping up to be a mega year for concerts, with some of the biggest acts in the world embarking on massive stadium tours. More events may be announced in the coming months, but with Taylor Swift, Beyoncé, and Blink-182 already on the docket, it’s a stacked schedule. You may have to wait in (virtual) line for these, but here are some of the most giftable concert tickets for 2023.

Swift’s Eras Tour (her first since Reputation) keeps getting more dates added to it, so keep an eye out for the singer coming to a city near you. Openers include Paramore, Phoebe Bridgers, and GAYLE.

Beyoncé may not have released the Renaissance visuals (much to our dismay), but the singer known as the greatest living performer is going on tour with her dance album in 2023.

The beloved English rock band will first tour the UK and Ireland before making several stops in the US.

Long-brewing rumors of a Blink-182 reunion tour have finally come true. The pop-punk icons will embark on a massive world tour, kicking off in March.

Paramore will also hit the road again following a run of intimate shows this year; in addition to opening for Taylor Swift, Hayley Williams’ band will play all over the US starting next May.

Dance your heart out at the Tove Lo tour, which starts in Europe before heading to North America in February 2023.

Pop-punk queen Avril Lavigne will take to the road in 2023 for her rescheduled European tour.

Panic! At The Disco

Catch Brendon Urie’s antics (and soaring falsetto) at one of these shows next year.

He may have dabbled in acting, but Harry Styles is first and foremost a musician, and he is still touring next year. Feather boa not included in ticket price.

The near EGOT-er’s Special Tour continues through 2023 with European tour dates.

CRJ’s Loneliest Time Tour also extends into the new year with a handful of dates.