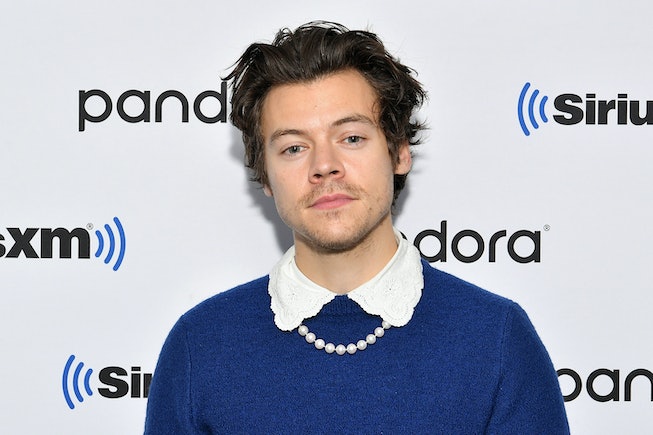 Harry Styles is currently on tour in support of his excellent (Stevie Nicks-approved) sophomore solo album Fine Line, and before long, the über-stylish celebrity should be sharing some new music too. It’s clear that the young musician is busy being famous, but Styles isn’t ready to let us forget that he’s not just a singer, just yet. According to recent reports, Styles is returning to the silver screen — and not just for another arthouse film, either. Nope. Styles is hitting the big leagues as he prepares to join the Marvel Cinematic Universe.

The exciting announcement comes by way of Variety Senior Film Writer Matt Donnelly, who attended yesterday’s world premiere of Eternals at the El Capitan Theater in Los Angeles. Following the splashy event — which was attended by Eternals stars like Angelina Jolie, Salma Hayek, Brian Tyree Henry, Kit Harrington, Kumail Nanjiani, Richard Madden, and Gemma Chan, as well as director Chloé Zhao — Donnelly took to Twitter with a special announcement. “Big reveal from [the Eternals] premiere,” he wrote. “Harry Styles has joined the MCU as Eros, brother of Thanos.” (Further reports confirmed that his character is introduced in the ever-classic MCU post-credits scene.)

Of course, this isn’t Styles’ first silver screen appearance — even if it is definitely his biggest. It seems like just yesterday that headlines were being made about Harry Styles’ first film role in Christopher Nolan’s epic Dunkirk, a film that firmly established the former One Direction member as one to watch in Hollywood as much as we were already watching him on the Billboard charts. Styles followed his Nolan debut with a leading role in the soon-to-be-released Don’t Worry Darling, a 1950s psychological thriller where he plays the “dashing husband” to Oscar nominee Florence Pugh’s “idyllic housewife.” (This is also the film that ignited his current relationship with Olivia Wilde, who’s directing.) And after that, he will appear as the titular closeted gay character in My Policeman alongside The Crown’s Emma Corrin.

But none of these roles can compare to the one he’s now snagged in the Marvel Cinematic Universe, which has quickly become industry shorthand for “official Hollywood superstardom” (as evidenced by the nice payday). That Eros seems to be poised for a big moment only adds to the anticipation. According to a Marvel fandom website, Eros is the youngest son of two Eternals. Though he was originally born Eron, his parents renamed him Eros due to his interest in women, which also put him at direct odds with his older brother: former MCU Big Bad, Thanos. While Thanos focused on world domination, Eros is described as a “fun-loving, carefree womanizer” who only began to take life seriously once his brother began launching attacks on other societies.

All this is to say: Styles’ Eros will probably play a large role in the post-Thanos world of Marvel. For now, there is no way to know when his character will actually be written into a full Marvel film. But judging by tradition, a post-credits appearance is a classic introduction tactic in the MCU, so hopefully, his official induction into the Marvel fold isn’t too far away. With any luck, he’ll appear in at least one of the Phase IV films, which are currently slated through July 2023.

In the meantime, get ready to meet Eros when Eternals premieres nationwide on November 5.

Revisit the trailer for Eternals below.