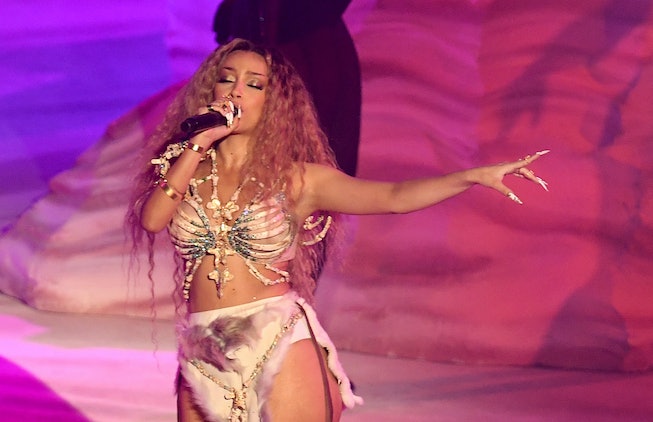 For many, 2020 will be remembered as the year the COVID-19 pandemic changed everything about our way of life. But perhaps, it should also be remembered as the year TikTok ruled the Billboard charts. Thanks to the popular video app’s viral dances and trending routines, many songs were able to shoot up the charts with or without radio play, televised performances, or heavy promotion. A new single could be made or broken on the site — all it needed to do was inspire users to jump on a new bandwagon. If you need any proof of the app's power, just look at TikTok’s ten most popular songs of 2020, which were released earlier this morning.

Unsurprisingly, every single song on the list charted in the Top 40 of the Billboard Hot 100 charts. Several songs even peaked in the top spot, including the Beyoncé remix of Megan Thee Stallion's hit "Savage" (which landed in the #2 spot on TikTok's list), Cardi B and Megan Thee Stallion's pussy power anthem "WAP" (which landed at #4), Doja Cat's history-making "Say So" (coming in at #5), Roddy Ricch's "The Box" (taking the #7 spot), and Jason Derulo and Jawsh 685's controversial hit "Savage Love (Laxed – Siren Beat), which took the top spot. Naturally, all five of these songs inspired viral dances on the app prior to their chart dominance, from Megan Thee Stallion's quarantine-ruling #SavageChallenge to Doja Cat's inescapable body-rolling "Say So" routine.

Coming in closely behind are Rod Wave's "Rags2Riches," which peaked on Billboard at #12 and came in at #8 on TikTok's list, and Saweetie's Too $hort-sampling "Tap In," a top-20 Billboard hit that placed sixth for TikTok. Rounding out the list are Travis Scott and Young Thug's "OUT WEST" and BENEE's "Supalonely," which occupy the #3 and #9 slots, respectively, on TikTok's list; they peaked at #38 and #39 on Billboard.

The final slot on TikTok's ranking is rather bittersweet: the late Pop Smoke's "What You Know Bout Love" sits in the #10 spot. Less than ten months after the rising Brooklyn-born rapper's tragic death (he was only 20 when he was brutally murdered), it's nice to know that his unique take on New York drill music has made its way into the hearts of millions, including grade school teachers in Georgia.

Taken all together, these ten songs reveal an undeniable truth about the power of TikTok in our modern music landscape. Where the rise of Spotify marked a clear pivot for how we as listeners consume music (specifically, new releases), the rise of TikTok marks yet another shift in the culture. The growing popularity of streaming inspired artists of all shapes, stripes, and genres to focus on the "single," as playlist-oriented services like Spotify slowly became surefire ways to capture the attention of the general public and build a strong, lasting audience of listeners. TikTok, however, is signaling a pivot towards movement — after all, the best way to have your song go viral on the app is by having an easy-to-learn dance to go along with it.

Check out the full TikTok ranking below.