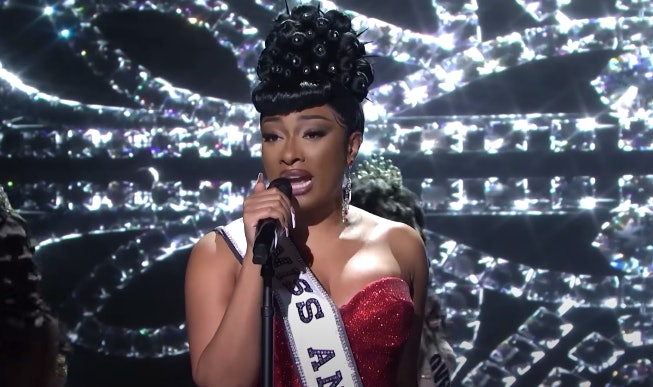 UPDATE: This past Saturday night, Megan Thee Stallion took her post in Studio 8H at 30 Rockefeller Plaza for a night that was, by all means, a celebration. For her debut Saturday Night Live hosting gig, the rapstress-cum-actress kicked things off with a rapturous opening monologue, which found her effortlessly cracking jokes about her many different alter-egos, her great twerking, her college degree, her British accent, her huge need to get some sleep, and of course, the question she assumed was on everyone’s mind: Why did Popeyes take the Hottie sauce off the menu?

Thing didn’t slow down from there either, with Megan appearing in most of the night’s sketches. Some of her funniest included “Girl Talk,” a talkshow spoof where Black women communicated almost exclusively through different intonations of the word giiiiiiirl; “Deer,” where Megan tries to show her father (Kenan Thompson) a deer outside the window of her now home; and “Hot Girl Hospital,” a medical drama following Megan and her colleagues as they run a hospital that specializes in BBLs, tummy tea, and Fashion Nova makeovers for ‘mid’ females. “We Got Brought,” a hilarious musical sketch about a group of +1s who are abandoned when their friends start bonding with each other, found Megan trading verses with the Emmy-nominated Bowen Yang — it served as a great preview of what we might see from the pair’s forthcoming A24 musical comedy, F*cking Identical Twins.

And of course, the performer shined super-bright on the musical stage, where she gave vibrant life to her Traumazine tracks “Anxiety” and, in a mashup, “NDA” and “Plan B.” The performance of “Anxiety,” in particular, marked another career highlight for the rapper. Following an earlier mention of her new mental health website, Bad Bitches Have Bad Days too, Megan seemed to feel every singe word of the emotional track while on stage. Flanked by several dancers, all dressed in pageant gowns adorned with sashes for titles like “Miss Underpaid,” “Miss Overworked,” “Miss Insecure,” and “Miss Overlooked,” Megan turned the stage into a cathartic platform. By the time she started to tear up halfway through, it was hard not to tear up along with her.

ORINGAL ARTICLE: The last time Megan Thee Stallion performed on Saturday Night Live, she made headlines for her performance of “Savage,” which included words by Malcolm X and powerfully referenced the late Breonna Taylor. More than just a stylish rendition of her chart-topping anthem, the performance felt like a genuine moment, and it proved that Megan knew how to hold her own on the storied SNL stage. So of course the long-running sketch comedy would have her back for its upcoming 48th season — and this time, Megan will be pulling double-duty, as musical guest and host.

Right in the middle of promotion for her latest album Traumazine, Megan is set to make her hosting debut (and her homecoming as musical guest) on October 15, marking the third episode of the season. Before her? Top Gun: Maverick’s Miles Teller with Kendrick Lamar for the October 1 season premiere, and The Banshees of Inisherin’s Brendan Gleeson with WILLOW on October 8.

The SNL appearance is coming at a great time for Megan, who has been steadily staking a claim for herself in the world of acting. This summer, the multi-hyphenate appeared as her rap alter-ego Tina Snow in STARZ’s strip-club drama P-Valley and officially joined the Marvel Cinematic Universe (well, she twerked alongside Tatiana Maslany in Disney+’s She-Hulk: Attorney At Law). The aspiring actress has a confirmed role in A24’s first musical Fucking Identical Twins, and if IMDb is to be trusted, another in the upcoming Best Man Wedding. So, yes. Perfect time for a debut hosting gig.

Of course, while Megan is making her grand return to 30 Rockefeller Plaza, many members of the SNL cast we’ve come to love won’t be. That means no more Pete Davidson as a dragged-up Chad, yes, but also no more Kate McKinnon, Aidy Bryant, Kyle Mooney, Alex Moffat, Melissa Villaseñor, or Aristotle Athari either. Oh yeah, Chris Redd just announced his departure this week, too.

At least Megan will get to party with some of the new kids, though, including notable rising names like Marcello Hernandez, Molly Kearney, Michael Longfellow, and Devon Walker. As SNL creator Lorne Michaels said at this year’s Emmy Awards, where his show won its 93rd trophy, “This will be a transition year. The change years are always difficult, but also really exciting.”

And who knows? If Megan turns out to be amazing (which we know she will be), maybe someone in Hollywood will greenlight that Bring It On! reboot she wants. Gabrielle Union is already in!

This article was originally published on Sep. 21, 2022