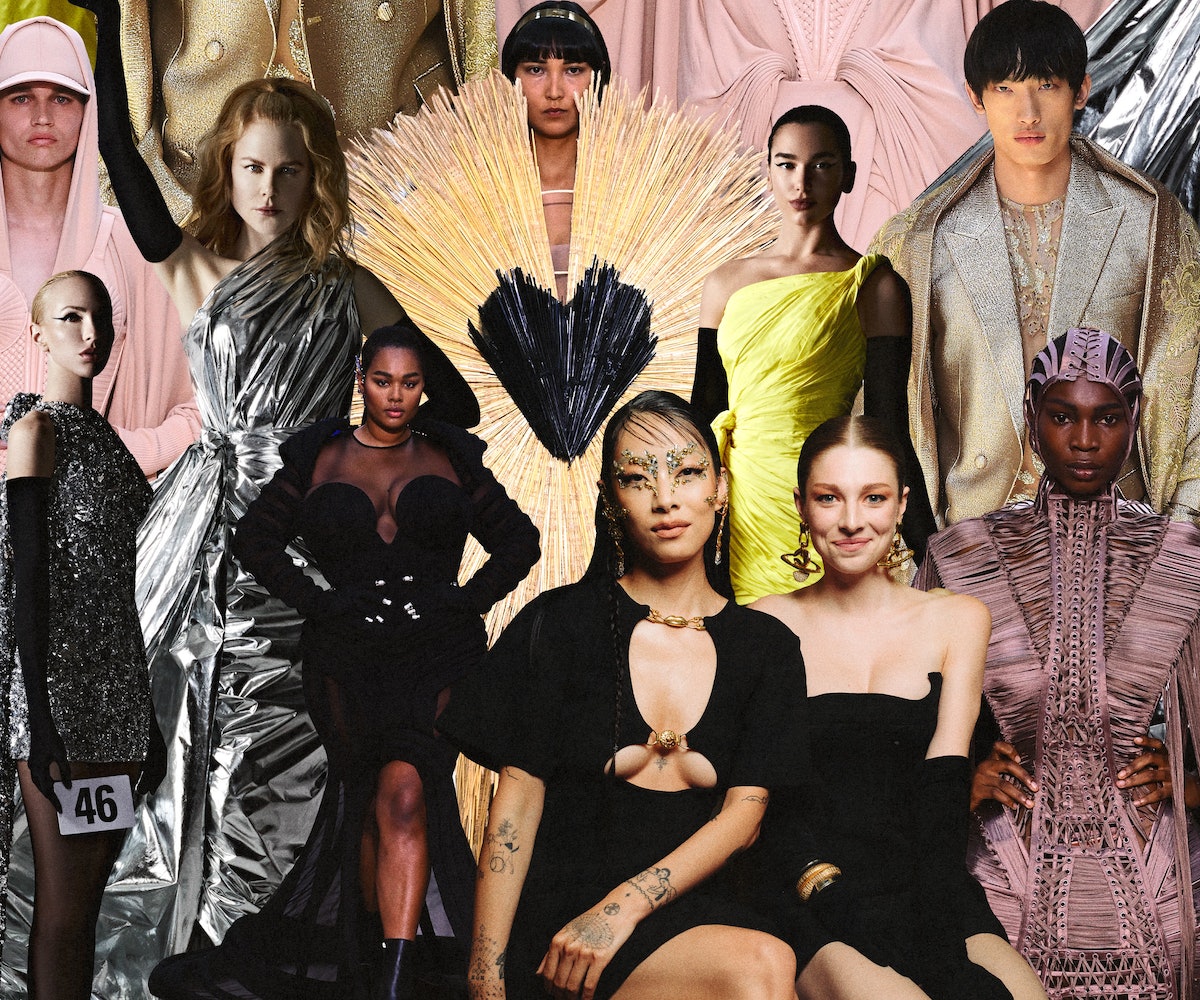 It seems that the complete fashion week circuit is back and better than ever. Following the menswear presentations held just a few weeks prior, Paris Couture Week officially kicked off the month of July with plenty of unforgettable moments.

From Monday, July 4, to Thursday, July 7, our favorite fashion houses took their most intricate designs to the catwalk. Earlier in the week, Schiaparelli welcomed a front row of famous faces for its latest runway show while Balenciaga debuted its couture collection featuring a celebrity-packed runway, featuring Kim Kardashian, Nicole Kidman, and more. Plus, we got to see North West outshining her family in Paris all week long, rocking the most stylish designer ‘fits we’ve ever seen on a 9-year-old, usually topped off with her favorite Balenciaga x Crocs platform clogs.

There were also some head-turning street style moments at Chanel, a number of best-dressed celebrities, and otherworldly makeup looks particularly at Iris Van Herpen’s show. There were even some unexpected appearances in the fashion capitol, too, with Mary-Kate Olsen attending Balenciaga’s dinner party after its runway show.

Ahead, read more about the can’t-miss collections and fashion moments from Paris Couture Week Fall 2022.

Over the Fourth of July holiday weekend, Schiaparelli’s Daniel Roseberry revealed his most brilliant couture collection so far, taking some of the highly-praised outfits from the house’s new exhibit Shocking! The Surreal World of Elsa Schiaparelli. Throughout the show, we got to see Roseberry play on Schiaparelli’s signature black-and-gold ensembles with avant-garde silhouettes and textures.

But of course, it’s not a fashion show without its star-studded guest list and for the occasion, Schiaparelli tapped the biggest stars of the moment to sit front-and-center at the show. For instance, Euphoria actress Hunter Schafer donned a chic LBD to the front row, while Emma Watson was seen in attendance opting for a boxy blazer and distressed skinny jeans. Rina Sawayama caught our eye with her all-black ensemble and metallic adornments on her face, while singers CL and Anitta were also seen rocking the brand’s coveted looks. — India Roby

On Wednesday, July 6, Balenciaga’s Demna unveiled his second-ever couture collection for the French fashion house, which was held in the exact replica space modeled after Cristóbal Balenciaga’s Paris salon. Balenciaga’s Fall 2022 couture collection is as dystopian as it gets, as the luxury brand featured futuristic silhouettes, with models strutting the catwalk in head-to-toe neoprene and metallic gowns, and their heads covered with face shields.

But in true Demna fashion, the designer continued to showcase his affinity for pop culture by including some unexpected, yet familiar, faces. Kim Kardashian made her first-ever runway appearance, with Kris Jenner and daughter North West showing their support from the front row. Actress Nicole Kidman and Selling Sunset’s Christine Quinn also made their catwalk debut, plus singer Dua Lipa, who had only walked for Versace’s Spring 2022 show beforehand, was seen on the Balenciaga couture runway, as well.

Later that evening, the fashion house held a celebratory dinner party and its star-studded guests arrived sporting all-black and baggy denim looks. Many of the memorable attendees included Euphoria’s Alexa Demie, Bella Hadid, KARD’s Big Matthew, and many more. There was also a rare appearance from Mary-Kate Olsen, who was captured heading to the venue dressed in, you guessed it, all-black. – IR

Though Paris Couture Week primarily features women’s clothing, Elie Saab switched things up with its couture debut for men. “I’ve been receiving requests to dress men for quite some time,” the designer told Vogue in an interview after the runway show. “They want to show off, to be visible, to get the attention.” Saab’s signature aesthetic, rooted in all things embellished and opulent, translated seamlessly through detailed floor-length capes, sheer shirts layered underneath tailored suits, and fabrics that shimmered with a metallic finish. — Maria Bobila

To continue Jean Paul Gaultier’s tradition of having a rotation of guest designers create the brand’s couture collections, Olivier Rousteing presented his own designs, following the latest collection by Diesel creative director and Y/Project founder Glenn Martens. A few of Rousteing’s OG Balmain Army members arrived to show their support, including Kim Kardashian, who sat alongside her stylish daughter North West in matching pinstripe outfits. As for the new collection, which made its debut one hour after the show’s original time slot, Rousteing paid tribute to the brand’s house codes, from striped prints and tattoo motifs to cone bras and even a full look inspired by its iconic fragrance bottle. — MB

Though not exactly couture, Vetements held its Spring 2023 runway show on the final day of Paris Couture Week, marking the first physical presentation from Guram Gvasalia, co-founder, creative director, and younger brother to Demna, who stepped down from the brand in 2019 to focus solely on Balenciaga. The new collection was full of the brand’s tongue-in-cheek, casual-luxury staples, including a nostalgic slogan tee referencing a meme-fied graphic tank that Paris Hilton “wore” in 2005. Rather than using the top’s original phrase “STOP BEING DESPERATE” (which was then rumored and photoshopped to say “STOP BEING POOR”), the design arrived on the runway emblazoned with “STOP BEING RICH” and styled with an extravagant feather robe in bright pink and baggy jeans. — MB

Over in Rome, Valentino hosted its own couture show for its Fall 2022 haute couture collection, titled “The Beginning,” at the Italian city’s well-known Spanish Steps. The collection served as an homage to Valentino’s storied fashion history since 1959 and the whopping 102 looks were all about extravagance: sculptural silhouettes, feathers, neon hues, sparkling embellishments, cascading ruffles, rosettes, and many more. Considering the slew of celebrities dressed in the fashion house’s now-signature Barbiecore pink that sat front row to witness the main event, we have a feeling that plenty of these couture ensembles will make their way to the red carpet very soon. — MB

NEXT UP
Fashion
Designer Kim Shui Is Crowdsourcing A Garment For Her Next NYFW Runway Show
Fashion
Issey Miyake’s Best Designs Over The Years, From The Runway To Steve Jobs
Fashion
Dixie D’Amelio’s Style Evolution, From TikTok Famous To Pop Star
Fashion
Tommy Hilfiger Gets Into The Secondhand Business With ThredUp