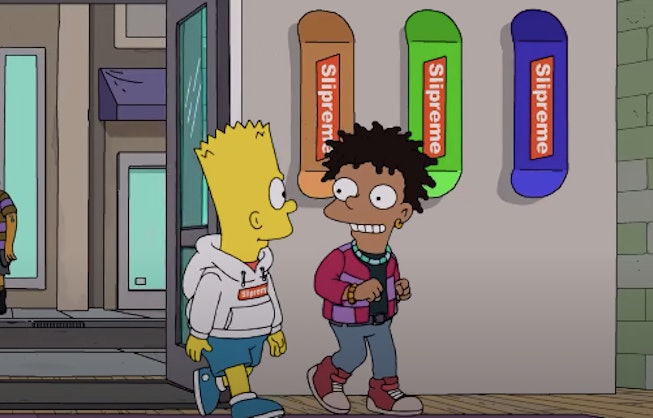 What can’t The Weeknd do?

After launching a career off a mysterious alter-ego, blowing up as a chart-topping pop star, headlining the Super Bowl, reinventing the “album era” for the next generation, and even saying fuck you to The Grammys, The Weeknd is continuing to branch out with his domination of the televised animation sect. After appearing in a 2020 episode of American Dad and later telling Variety that “an obvious bucket list would be to work on The Simpsons,” the self-proclaimed cartoon fanatic has fulfilled yet another huge dream. In last night’s episode of the long-running, multi Emmy-winning animated sitcom The Simpsons, the artist born Abel Tesfaye appeared as — quite fittingly — a super stylish trendsetter who wreaks havoc in Springfield.

In the episode, titled “Bart the Cool Kid,” The Simpsons’ resident troublemaking son befriends a famous child influencer named Orion Hughes — voiced, of course, by an impressively child-pitched The Weeknd. The owner of “ultra-cool skatewear brand” Slipreme (c’mon, you get it), Orion is the arbiter of all things cool, popular, and oh-so-of-the-moment. So when he decides to befriend Bart, the eldest Simpson child instantly becomes cool too.

Bart is deemed so cool, in fact, that Orion brings him into the fold, running some ideas by him for Slipreme’s upcoming release party. In a clip from the episode, Orion walks Bart through his store, passing red rectangle-branded skateboards, sneakers, and posters. “The release party is Saturday night. It’s gonna be perfect,” he tells his new friend, right before listing off all his qualifications: “The right music, the right influencers, and every single person there will be young, cool, and beautiful.”

Unfortunately, his plans are foiled by the sudden arrival of innumerable “middle-aged” and “uncool” men. Rallied by Homer Simpson, these local fathers have all decided to copy Orion’s style in the hopes of being approved as “cool” by their younger, more trend-focused children. “You’re buying that for yourself?” Orion asks incredulously when a gray-haired adult asks if Slipreme carries a certain jacket in a larger size. “But old people don’t know about my clothes!”

Between this Simpsons cameo and his appearance on American Dad two years ago, it would seem that The Weeknd held a soft spot in his heart for adult animation. But these aren’t Tesfaye’s only forays into Hollywood — nor are they his biggest, flashiest, or most exciting.

Until then, you can check out clips from last night’s episode of The Simpsons below.