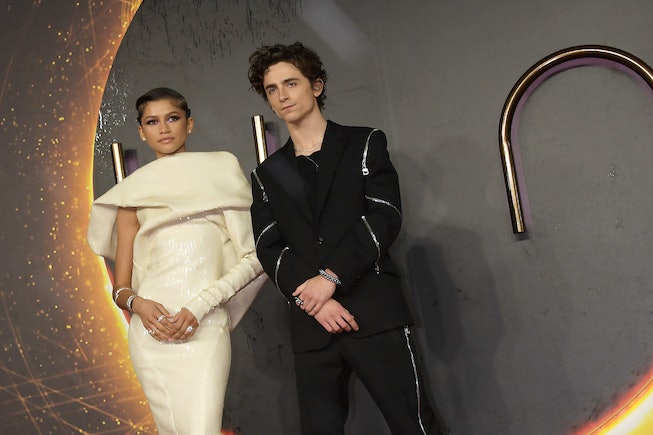 After their showstopping red carpet looks at the 2021 Venice Film Festival, Zendaya and Timothée Chalamet are back together again to promote their new film, Dune. On Monday, October 18, the two actors made an appearance in London and, naturally, they wore their most fashion-forward ensembles. During the movie’s official red carpet UK premiere, Zendaya wore a sculptural gown made up of white sequins from Rick Owens while Chalamet opted for a black Alexander McQueen suit accented with zippers along the jacket sleeves and pants. As the faces of two luxury jewelry brands, both Zendaya and Chalamet wore Bvlgari and Cartier, respectively, with their outfits.

But their style power doesn’t stop there. On Sunday, Oct. 17, the Dune stars attended a photocall and screening, as well. Styled by Law Roach, Zendaya wore a Spring 2020 look from the Andreas Kronthaler for Vivienne Westwood collection, which includes a corseted top made up entirely of brass chains and large pendants. (Another statement piece to add to her collection of breastplates from Loewe and Tom Ford.) She paired it with a front-split skirt featuring a checkerboard print that was hand-painted with natural dye from Burkina Faso and in collaboration with the Ethical Fashion Initiative. She finished her look with some rings and a pair of pointed pumps.

“When in London…wear @viviennewestwood,” shared Zendaya on Instagram, along with a few photos of her ‘fit.

As for Chalamet, he wore a custom suit and shirt from Stella McCartney. Inspired by the British designer’s Summer 2021 collection, the look is printed with an organdy-style print made up of fungi. Who says cottagecore is just for dresses? Chalamet accessorized his colorful suit with white heeled boots.

After their photocall during the day in London, the Dune duo pulled double-designer duty as they changed into new looks for the film’s screening. Zendaya wore a Peter Do ensemble from the designer’s Spring 2022 runway collection, along with Bvlgari Serpenti Viper jewelry, while Chalamet switched into a sparkling black suit from Saint Laurent, which he paired with some jewelry and black combat boots.

While Dune is set to hit screens across the globe very soon, including HBO Max on Thursday, October 21, and in theaters on Friday, October 22, we’re hoping this dynamic fashion duo have a few more red carpet appearances to give us. If not, there’s always Spider-Man: No Way Home and The French Dispatch coming soon.

Ahead, check out the rest of our favorite celebrity looks, including Dua Lipa in Versace, Jodie Turner-Smith in COS, Kendall Jenner in vintage Jean Paul Gaultier, and more.

Emma Watson attended the 2021 Earthshot Prize Awards in London wearing a custom demi-couture gown by Harris Reed’s FOUND line. The gown is made up of an upcycled bridal look sourced from Oxfam and paired with the designer’s signature H-flared trousers.

Dakota Johnson is still on a very stylish promo tour for her new film The Lost Daughter. Her latest look, a velvet dress with statement shoulders and heart-shaped buttons, is from Alessandra Rich.

Bella Thorne arrived in Rome for a photocall and screening of her movie Time Is Up wearing a blazer dress from Area with slingback pumps and the latest going-out “It” bag trend: a crystal-covered purse from Prada.

After her on-stage outfit change while performing “Have Mercy” on the Tonight Show, Chlöe visited the SiriusXM Studios in New York City wearing head-to-toe leather, including a pair of CULTNAKED pants.

Saoirse Ronan attended a performance of The Tragedy of Macbeth in London wearing a full look from Celine by Hedi Slimane, including a gray striped suit and a cutout, one-shoulder bodysuit.

Jodie Turner-Smith hosted a cocktail party with COS in Los Angeles to celebrate the brand’s Fall 2021 collection and campaign, which features the actress. Naturally, Turner-Smith wore a full COS look, including a cozy crewneck shirt dress and chunky black boots.

Kendall Jenner switched out of her go-to fall outfit in New York City for vintage Jean Paul Gaultier. She paired her mesh look with a shoulder bag from The Row and a pair of Yeezy heels.

Alexa Chung celebrated Damien Hirst’s work during Frieze in London and wore one of fashion’s hottest items right now, the corset top. Chung’s version is covered in sequins, and she paired it with a baggy khaki-colored blazer and black trousers.

Regina King attended the premiere of her new film The Harder They Fall wearing a sequin mini dress from David Koma with bell-sleeve and cutout details.

Iris Law made an appearance at Bvlgari’s high jewelry gala in London. The model wore jewelry from the brand, along with a midi dress, long white gloves, and a head scarf.

Lizzo partied with Cardi B for the rapper’s birthday in Los Angeles. Following the celebration’s “dancehall” theme, the “Rumors” singer wore a sheer purple dress from Matthew Reisman.

Gigi Hadid was spotted out in New York City’s SoHo wearing a fully layered ‘fit, which included a white double-breasted coat over a brown button-down, yellow cable-knit sweater vest, and artsy-printed white jeans. She accessorized her look with yellow sunglasses, necklaces, a mini bag, and sneakers.

Cynthia Erivo arrived on the red carpet for the second season screening of Twenties wearing a Fall 2021 yellow ruffled look from Greta Constantine.