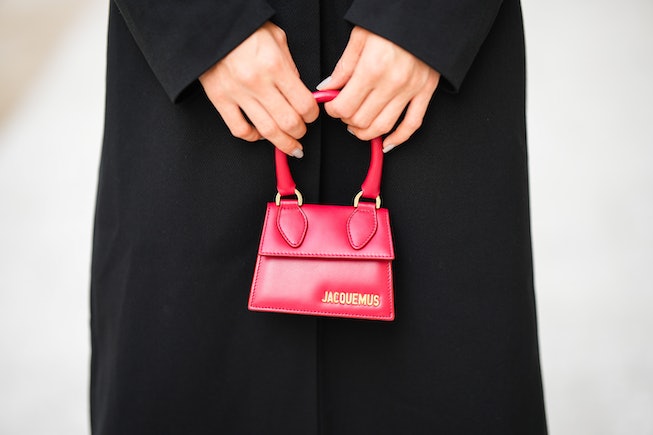 Whether it be Fashion Week in New York, London, Seoul, Milan, or Paris, or you’re making a fashion TikTok, you should always be prepared with up-to-date and correct fashion knowledge — lest you want to be dragged for not knowing how to pronounce Jacquemus. You don’t want to enter into some very intellectual, high-brow conversations and not have the names of designers and brands down, so we want to make sure you pronounce them correctly. If you've ever been too afraid to ask how to pronounce Demna Gvasalia aloud, keep reading. This one's for you.

Even if you think you have fashion's designer encyclopedia locked down, chances are you might still be getting a few key names wrong. And what is more horrifying than mispronouncing Givenchy in front of your snobbiest co-worker? Even if you're well-versed with the industry staples, it's pretty tough to keep up with all of the newest, buzziest names and brands that have emerged in recent seasons (think: Telfar, Pyer Moss, Altuzarra, Aimé Leon Dore, and Eckhaus Latta).

Fear not: We put together a comprehensive A to Z pronunciation guide of some of fashion's biggest (and admittedly, trickiest) names, from the basics up to the newcomers. Read on (and out loud), below.

As one of the coolest, IYKYK streetwear names of the moment, Teddy Santis’ New York-based menswear brand is the combination of the French word for love (aimé), his father’s childhood nickname (lion, or leon in French), and the last syllable of Santis’ first name (Theodore). In total, its name is pronounced: “eh-may lee-on door.”

Taking the helm of Gucci as creative director in 2015, Italian fashion designer Alessandro Michele is best recognized for his bold, artsy, and maximalist designs. Despite his Harry Styles-sized impact on the fashion world, his last name seems to be a struggle for some: "ah-lay-sahn-dro mih-keh-leh."

American design powerhouse Anna Sui is one of the more beloved and acclaimed blueprints for vintage-inspired, quirky yet glam womenswear. If we had a nickel for every time someone mispronounced "Sui," we'd be rich: "an-na swee."

One of the Antwerp Six, Belgian fashion designer Ann Demeulemeester is recognized for founding her namesake label, which she left in November 2013. We promise the name is not as intimidating as it looks: "ann de-mule-eh-meester."

Party and housedress connoisseur Batsheva Hay gives us tops, skirts, and pants with what she refers to as a “Victorian and Prairie sensibility.” The eponymous label is pronounced: "bat-sheh-vah."

This Canadian fashion label specializes in fashion that brings out the contrast between masculine and feminine design. The name of this brand can be tough if you don't speak any French, as the ending "-le" is essentially silent, meaning the name (which translates to "handsome girl") is pronounced "bo-fee."

Founded by Rei Kawakubo (“rey kah-wah-koo-bo”) in the ‘70s in Paris, this Japanese label is one of the most sought-after luxury brands in the world. Still, even after the 2017 Met Gala, we still hear this one mispronounced: "comb dey gahr-sawn."

Boasting an array of gender-neutral designs and a reputation for casting diverse, inclusive models for their runway shows and campaigns, Eckhaus Latta was founded by Mike Eckhaus and Zoe Latta in 2011. While the spelling may be intimidating, the pronunciation is simple: "eck-house la-ta."

One of the top luxury fashion, haute couture, and perfume houses in the world, the French brand of Givenchy began in 1952 by designer Hubert de Givenchy. Another commonly mispronounced fashion staple, the G is pronounced the soft French way, i.e. like a J: "jzee-vawn-shee."

A classic! Specializing in their iconic leather handbags and other lifestyle accessories, Hermès is another example of a French label that is the bane of English speakers’ existence. Please stop saying "her-meez," it's: "air-mehz."

Jacquemus, the label behind the ultimate minuscule handbag, has been a buzzy name in the industry as of late. Except, how the hell do you say it? The trick is to ignore the "que": "zhak-moose."

The French-American luxury designer launched his brand, Altuzarra, back in 2008 and has since grown tremendously in recognition for his multicultural design influence. Pronounce his last name and label as so: “ahl-too-zah-rah.”

Khaite is a luxury fashion label known for its elevated basics. Just like their design aesthetic, this one is simple: "kate."

Founding her eponymous New York-based label in 2016, Kim Shui combines her hybrid American, Italian, and Chinese upbringing into her trendy, it-girl clothing designs. Her name and label is pronounced as follows: "kim shoo-wee."

The third oldest French fashion house still in operation, Lavin was founded in 1889 by Jeanne Lanvin, who famously created the flapper dress. Pronounce the luxury label with nice and long French syllables with soft N’s at the end of each one: “lawn-vahn.”

The Spanish luxury fashion house is best known for their high-quality leather goods, accessories, and ready-to-wear clothing. PSA, everyone — the W is pronounced like a V: "loh-way-vay."

One of the most renowned labels in high-end luxury haute couture and ready-to-wear fashion, Maison Margiela is currently fronted by head designer John Galliano. Another soft G situation: "may-sohn mar-jhell-ah."

Winning the LVMH Prize for Young Fashion Designers in 2017, Marine Serre, of the eponymous label, is everywhere right now — especially on Dua Lipa. Everyone seems to get confused when pronouncing this buzzy French designer's name: "mah-reen ser."

Originally from Iran, Maryam Nassir Zadeh grew up in Los Angeles and founded her namesake, NYC-based contemporary label after attending Rhode Island School of Design. The brand should be pronounced as: "mary-um nah-seer zah-dey."

Known for her bright, colorful, and whimsical designs, South Korean designer Minju Kim exploded in popularity after winning the first season of Netflix's Next In Fashion. With the Korean soft K (kind of like a G), you should pronounce her name like: “mihn-joo gim.”

Currently captained by the eccentric American fashion designer Jeremy Scott as creative director, Moschino is known for its loud, glam, and campy designs that often take inspiration from pop culture. Everyone's always like, "Is it she or key?" It's the latter: "mohs-key-no.”

Olivier Theyskens is a prolific Belgian fashion designer who has worked at the likes of Nina Ricci, Theory, and Rochas. His name is pronounced as follows: "oh-liv-ee-ay tay-skins."

Prabal Gurung, the Singaporean-Nepalese fashion designer best known for colorful prints and refined dresses, is unfortunately very often a victim of mispronunciation. Let's clear it up for you: "prah-bull goo-roong."

Founded by designers Jack McCollough and Lazaro Hernandez in 2002, Proenza Schouler is an elevated womenswear and accessories brand. Now, is it pronounced like school-er or shoe-ler? The former: "pro-en-zuh skool-er."

Pyer Moss is an on-the-rise luxury streetwear brand that celebrates Black culture in America. In case you missed it, Pyer Moss designer Kerby Jean-Raymond cleared up the whole pronunciation debate on Twitter: Pyer is pronounced like "Pierre."

This brand focuses on designing sophisticated, timeless closet essentials for its clientele. The Swedish-owned, New York-based label is pronounced "roh-duh-beer" — the J is silent!

Japanese luxury fashion brand Sacai was founded by Chitose Abe in 1999 and is iconically known for merging casual clothes and formal wear. It should be pronounced in the Japanese way — AKA not “eye”: “suh-kah-ee.”

Founded by Yves Saint Laurent and his partner Pierre Bergé in 1961, Saint Laurent is one of the top French luxury fashion houses in the world. If you want to pronounce this one properly, don't forget the T’s are generally silent in French: "sahn loh-ron."

Known for her bold checkered prints and use of mixed materials including fleece, Sandy Liang is one of the “it” designers of the moment — she’s recently had brand collabs with Warby Parker, Vans, and Target. Pronounce the up-and-coming designer’s name as: “san-dee lee-ung.”

Becoming a staple at London Fashion Week, Simone Rocha is recognized for her signature sense of subversive femininity. Some may think the Irish designer's last name is pronounced with a hard "ch," but it is in fact "sih-mone row-sha."

A renowned streetwear brand founded in California in the ‘80s, Stüssy has gone far beyond West Coast skate culture. Despite its status and well recognized name, the label is largely mispronounced. See those two dots on the U? That’s call an umlaut, so the brand is pronounced as: “stoo-see” (not “stuh-see”).

British-Indian designer Supriya Lele founded her eponymous label in 2016, which is best recognized for her use of leather, vibrant prints, layered sheer textiles. Her name is pronounced as: “soo-pree-aa lell-ee.”

The Liberian-American fashion designer and DJ Telfar Clements is redefining what luxury fashion is with his now-famous label. Selling everything from its iconic, Beyoncé-approved $150 bags to durags, the brand takes pride in inclusivity. It’s pronounced “tell-far,” rather than the mixed-up but commonly heard version, “tef-lar,” which sounds a lot like kevlar, the synthetic material used in bulletproof vests.

Thai-American fashion designer Thakoon Panichgul's namesake label is known for its functional and well-designed wardrobe basics. The label is pronounced as follows: "tuh-koon."

This Tokyo-based designer is one of Japan's leading young designers, making a name for himself as a breakout star at the Autumn/Winter 2019 shows in New York. Known for using color, volume, and texture in his designs, his name is pronounced: "toh-moh kai-zoo-mee."

As if this label needs any introduction, Versace is known for its gaudy, bold, and mega-glam creations. Remember that time Donatella Versace herself called out Americans for pronouncing her last name incorrectly? We do. It's not "ver-sah-chee," guys, it's: "ver-sah-cheh." (It's definitely not Ver-say-ss.)

Vetements is a 2014-founded luxury fashion brand and design collective producing some of today’s most innovative and trendy designs — and it’s classic in terms of fashion mispronunciations. For those of you who don't know by now, it's "vet-mahn," with the T silent. (Bonus? The label's head designer Demna Gvasalia is pronounced "deem-nah vah-sal-eeyuh.")

A go-to for red carpet events, Lebanese fashion designer Zuhair Murad is recognized the world over for his dreamy, luxurious evening wear and formal dresses. His name is pronounced as: “zoo-hair ooo-rah-d.”

NEXT UP
Fashion
Apple Martin Is A Chanel Girl Now
Fashion
R&B Artist María Isabel Is Making Room For New Style With Nuuly
Fashion
Rosettes Are 2023’s Biggest Trend — Here’s How Celebs Wore Them in the 2000s
Fashion
Collina Strada & Vans Team Up For A Chiller-Friendly Collection
Style + Culture, delivered straight to your inbox.

This article was originally published on Sep. 6, 2019